Makarand Purohit
23 Nov, 2014 . 2 mins read
The water in Jamwadi village, Yavatmal has been severely contaminated by the Raymond Company but quality tests only confirm this when the villagers changed the name of the village on the test sample.

Contaminated water from the Raymond factory

A decade ago, Jamwadi village in Yavatmal, Maharashtra, was a famous tourist attraction due to its beautiful lake. Now, there is no lake to speak of thanks to the Raymond factory in Yavatmal. Wastewaster from the factory flows untreated into the lake, which is located 15 kms away. This has severely affected the environment, health and community life of not only Jamwadi village but also five others in the area namely Yechuri, Tiwsa, Bhoyar, Varaz and Chani. 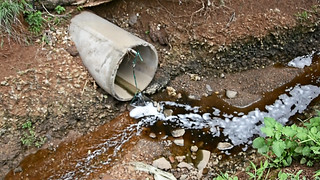 The water of the lake was used for irrigation and groundwater recharge. It was also a source of income for the fisher folk but not any longer. In just one decade, the wastewater from the Raymond Company has affected agricultural production as well as the quality of the land and water. None of the villagers now drink water from the hand pumps and wells located in the village. The women walk 2 kms to get drinking water.

"The villagers sent various water samples to the labs for quality testing, but every time the lab result showed that there is no contamination of water in Jamwadi. The surprised villagers, to check the authenticity of the report, again sent water samples from their village, but changed the name of their village. The lab examination report confirmed high contamination of water bodies in Jamwadi", says Sudhakar Dole, a resident of Jamwadi village.

Even after repeated complaints to various government departments, the villagers have seen no change in their situation. The District Administration authorities support the officials of the factory as if they are accountable to the Raymond Company and not to the locals.

The video titled ‘The Poisonous Encounters: Impact of Raymond factory pollution in Yavatmal’ shows the situation on the ground in Maharashtra.