Breaking a centuries-old curse in Uttarakhand

Chicu Lokgariwar
09 Jul, 2013 . 7 mins read
A small village in Uttarakhand stands testimony to the fact that rooftop rainwater harvesting is a reliable, economical and logical way of ensuring self-sufficiency and dignity.

Sudha and Bhuvan at their home in Gauna village

Sudha Gunavante is a contented woman. She has reason to be. After all, she and her husband have managed to prosper on their farm, her children are well-educated and well-settled, and her rhododendron syrup is the pride of the village. If that is not enough, she has also managed to escape a centuries-old curse.

Sudha and her husband live in Gauna, a small village in Lamgarah tehsil of Almora district in Uttarakhand. It was to this village that long ago, a sadhu arrived. He asked a householder for a drink of water but was refused this hospitality. Angered by this, he cursed the village that all its water sources would dry up and the village would not have any more water. When Sudha got married and came here some 30 years ago, the village was still curse-stricken.

The nearest source of water was a spring at the bottom of the mountain on which the village was located - a very steep 3km walk down, and the same steep 3km walk uphill with water-laden pots. There was more to the story. Water at this spring was limited. In the summer if she were unfortunate enough to arrive late, the stored water would be over and she would have to wait for half a day for the spring to replenish itself. To avoid this, she used to go to the spring at 3am, expecting a leopard to leap onto her back any moment. The three pots of water that were allowed per household needed to last her for drinking, washing and all possible domestic uses. There was no question of irrigation at all. Cattle needed to be driven far away till they found a watering hole with sufficient water to quench their thirst. 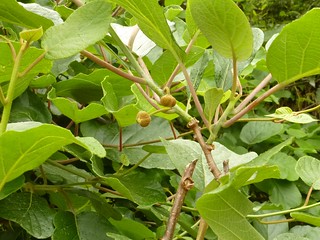 Since 2003, there has been a huge change in her life. No longer does she make that arduous and frightening trip down a mountain in the middle of the night. No longer does her entire day go in merely carrying water. No longer are she and her husband at the mercy of the rain. They now practice protective irrigation, start their seedlings before the monsoon, and cultivate exotic, high value crops like the Kiwi fruit. She is a member of a self-help group that manufactures and sells rhododendron syrup. So what happened in 2003?

To understand why this is so important, we need to consider the location in which their village is set. The Lower Himalayas, which is where their village is, are the mountains just south of the great eternally snow-clad peaks. The Himalayas are young mountains created some 65 million years ago when the Indian continental plate challenged the Asian landmass. The movement of the Indian Plate towards (and below) Asia led to the formation of these still-growing mountains. What does this mean in terms of water availability?

The Himalayas are made up of the sedimentary layers of the Tethys sea. They are soft and porous and have several layers, which are folded in torturous ways. This means that any water that seeps into the soil tends to flow rather than stay at the place of recharge. This further means that the springs respond quickly to the rains - they flow generously during and after the monsoon, but reduce their flow later in the year.

There is a further complication when it comes to rainfall. Uttarakhand receives abundant rainfall - about 1,500 mm per year- but this is not consistent across the region. The figure below illustrates the variation of precipitation across a diagnol section of the Uttarakhand Himalayas. This illustrates that precipitation is considerably lesser in the lesser Himalayas, where most people including the Gunavantes live than in the high Himalayas, which receives snowfall. The Shivaliks of course, receive high rainfall and are consequently densely populated and thriving regions.

In addition to the variations in rainfall, the topography also limits the amount of rainfall that is available for use. The steep slopes mean that most rainfall flows down the valley and so towards the plains. Since most villages are located on the slopes or near the ridges, water availability post-monsoon is low.This can be considerably augmented by storing this rainwater. 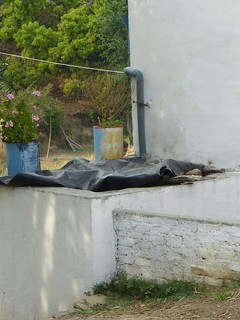 Rooftop rainwater harvesting collects water from the roof, through a system of horizontal channels and vertical down-take pipes and carries it to a closed tank. Water is stored here, close to the house and can be used for drinking and other domestic purposes. These tanks can be built of several suitable materials. The tanks at Gauna, partly funded through a project initiated by the Central Himalayan Environment Association (CHEA), an NGO that focuses on water management and improving livelihoods of people in the mountain states, were built of brick and plastered externally and internally.

Other villages in the area are following suit as well. Duarab is a village in Nainital district that prides itself on cultivating organic vegetables. Here too, nearly every roof has its 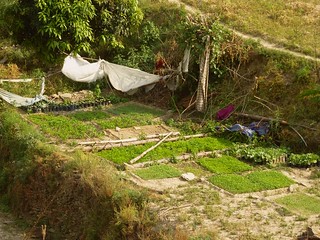 downtake leading to a storage tank. However, the villagers have chosen to continue to use the spring water rather than the rainwater for drinking. Why? Because the precious rainwater is reserved for watering seedlings. This enables them to raise vegetable plants well before the monsoon, thus ensuring that the vegetables they produce receive the high prices possible early in the season.

Harvesting surface runoff involves channelling the water that runs across the land and diverting it into an open tank. These tanks are constructed by the villagers. First a rectangular pit- the size may vary according to the amount of water it will receive and the land available - is dug. The surface is made smooth with a mixture of clay and cow dung. A plastic sheet is laid over this. Finally, a dry stone wall is built to protect this sheet.

Such a tank, if de-silted and maintained well 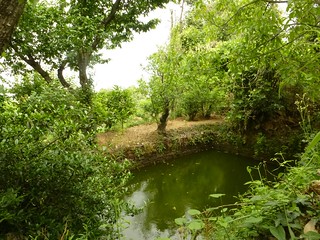 can last for decades. These are mainly used for irrigation and for livestock. The popularity of these tanks proves their efficacy. Bhuvan Gunavante started with 2 tanks in 2003; a decade later, he boasts of 10 tanks on his land. There are 155 such rainwater harvesting tanks in Gauna and its neighbouring villages.

How much water can a roof yield? Quite a lot. Let us  assume that the size of a roof is 6m X 4m (a conservative estimate). In a normal year, which receives an average rainfall of 1500mm, an astounding 36 cubic metres or 36 thousand litres of water rolls down it. However, not all this water can be collected and stored. Water from the first rains is allowed to flow away. This process known as the first flush cleans the roof. It is generally estimated that 80% of the rain that falls on a rooftop can be harvested. This means that about 29,000 litres can be harvested from the rooftop in our example. Averaging out 40 litres per person per day to be an adequate amount of water for a person in a rural area, these 29,000 liters will suffice a couple like Sudha and Bhuvan for 363 days - or almost the entire year!

It is also not necessary to build a tank of this capacity. We need to remember that rain does not fall in a single day, but is spread out. A study of the rainfall from 1909-2007 in Chaubatia, Uttarakhand reveals that on average, rainfall occurs on 77 days each year. This is spread through the year as illustrated in the graph below:

Ideally, a tank would store enough water to tide one over 3 months. In the case of Sudha and Bhuvan, this would store about 14,500 litres of water. However, it is not necessary to be so meticulous about this. Building a tank depending upon the space that a family can afford to allot to it, is still far more useful than not building one at all. The tanks designed to capture surface runoff too, can be aligned as per land availability. Water can be harvested from nearly every type of roof - from tin, slate and mud. In case of the latter, installation of a filter is necessary before rainwater enters the tank.

The biggest beneficiaries of the rainwater harvesting initiative are the women of these villages. No longer do they have to make the arduous trek in order to fetch water. Not only has it reduced drudgery, but also prevented water conflicts, opened up means of livelihood generation and made agriculture profitable again. 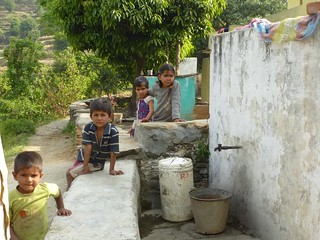