Kalwaheri is a village of over thousand households comprising mostly of small farmers and landless people tucked away in Karnal, Haryana. The district, once the birth place of the Green Revolution, is now far from green. The application of modern techniques of agriculture and the introduction of high yield crop varieties led to an initial production spurt but farmers now say that their soil is less fertile, which has started hurting their harvest of paddy and wheat.
View Kalwaheri in a larger map(1)

The technology, narrowly focused on increasing production, was destroying the water and soil. The groundwater in this area was already saline, and unreasonable canal irrigation raised the water table by 3-9 m leading to waterlogging. Farmers had to apply gypsum in the soils to make them cultivable. There were places where tubewells were used to pump water into the canals to reduce waterlogging.

The lowering of the groundwater table led to a decline in productivity. Traditional crops in the area like pulses were abandoned and people shifted to wheat-paddy rotation. Once flogged to death in scientific prescriptions and the choice of all farmers, the paddy-wheat sequence, which assures farmers minimum support price, is faced with many challenges now. 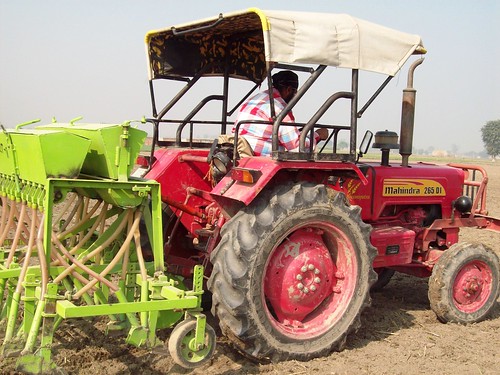 Innovation might be their only way out of this problem. Farmer Harpreet Singh had been struggling with this issue until an initiative of a research project came to his rescue. It helped him improve water use in agriculture, upgraded the soil health and cut down on agricultural inputs cost.

Harpreet, got a huge boost by the reorientation of research and extension toward alternative methods. He, along with some farmers, set up the Conservation Agriculture Small Farmers Association at Kalwaheri. The Association was actively supported by the agricultural scientific community namely the Haryana hub of Cereal Systems Initiative for South Asia (CSISA).

To deal with the crisis, the farmers were encouraged by the scientists to take up zero till agriculture, which forced them to stop deep tilling and puddling in paddy. They no longer removed and burnt the crop residue. Harpreet was the first in his village to get his farm laser-levelled (2), a technique through which farms are made near-flat with a slight grade for drainage. Unlevelled farms require extra water storage in paddy fields to accomplish puddling. Laser leveling is known to reduce water use by 25.57 per cent while at the same time increasing yields by 10.82 per cent, as per experiments at Punjab Agriculture Universty, Ludhiana. 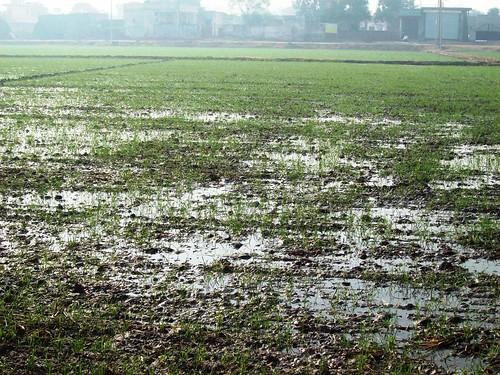 For placing the seeds and fertiliser in his farm where he had left the crop residue, Harpreet used the seed fertilizer drill by Happy Seeder. They skipped over paddy transplantation and instead, direct seeded the rice. This method would also reduce the need for pesticides over the next 2-3 years once the mulch and permanent crop cover is established, according to Harpreet.

Other farmers who were sailing in the same boat but were skeptical of conservation agriculture joined Harpreet soon seeing the results from his farm. This way the concept of zero tillage, is now gaining increased attention. “To wean away other farmers the state will have to intervene in a big way and provide incentives”, Harpreet says. Convincing the other farmers has been a challenging task as the yield increase and savings in inputs takes some time to show up.

To bring further precision in water application in the farms, CSISA installed tensiometers in the farms. This year, some farmers had taken up maize following wheat to come out of the paddy-wheat cycle. The State government has recently awarded the Kalwaheri Gram Panchayat for innovation in agriculture.

If the initiative in Kalwaheri has taught us one thing, it is that for a vibrant rural economy sustainable agriculture is a must.

View photos of the Kalwaheri initiative.

(1) Decades of usage of high-yield varieties that depend on heavy irrigation and mechanization have taken a toll on the farms. The magic of chemicalization and mechanization of agriculture worked for a while spurred by state support and free market operation. Soon it became clear that the increased grain yields did not necessarily help people climb out of poverty, nor did more food lead to less hunger. The bottom line is that technology cannot end hunger in an inequitable social system. Also, in this case the increased use of chemical fertilizers and pesticides has had negative fallouts on the soil whose natural character changed rapidly. Either the farmers have seen a decline in crop yields or the production has leveled off.