Manu Moudgil
06 Jan, 2015 . 5 mins read
Baadi near Jodhpur turned its weakness into strength to halt distress migration and reduce its dependence on rains.

Big sandstone hills cover the landscape dotted by little grass, while the land below is covered with Israeli babool (akesia tortlis), an invasive species which does not let any other vegetation grow. Amidst this, Baadi village with its lush green fields full of cabbage, pepper and groundnut seems out of place.

The settlement in Tiwri block of Jodhpur district, Rajasthan, is a prosperous one. Locals, around 75 families, grow vegetables, groundnut and food grains throughout the year but the success of this village lies not in its farms, but beneath the ground. And as has been the tradition of any human settlement, Baadi also owes its fortune to water.

Till the early 1990s, the village held little promise. Around 30 families used to occupy their houses for the four months of the monsoon, which would help them grow millets and pulses for domestic consumption. Groundwater was available at a depth of over 300 feet and the open wells would dry up after a few months. For the rest of the year, the people would move to nearby villages for labour work or migrate further to neighbouring Gujarat in search of better remuneration. Livestock mainly comprised goats; buffaloes and cows were limited.

Things changed when a team from Gramin Vikas Vigyan Samiti (GRAVIS) visited Baadi during its ‘Jan Jal Chetna March’, a foot campaign to understand and highlight the water scenario in villages of Jodhpur. “Baadi was one village which caught our attention as the water shortage was acute here forcing farmers to move out and work on low wages. On the other hand, a seasonal river running down ferociously during the monsoons from the north, would cause extensive damage to the farm land of Baadi and several other villages downstream”, recalls Vinod Kumar Tyagi, project coordinator of GRAVIS.

When GRAVIS decided to work at Baadi, the farmers extended maximum support because they were desperate for a breakthrough. “The village had a mix of all castes but water united all of them. They had no choice but to cooperate to avoid migrating to other villages eight months of the year. So a limitation turned into a blessing”, Tyagi says. A village development committee (VDC) was formed with representatives of each community to mobilise and manage resources.

However, it was not a cakewalk since GRAVIS had little experience in the field of water management. Taking the advice of the villagers, it started re-digging dried up wells to access water in deeper zones little realising that the efforts would come to square one the very next year. “Since we were not experts, re-digging of wells to reach the deep aquifers seemed the possible solution. The water table receded further down the next year but failure only made the team look for innovative solutions”, Tyagi says.

It was the late Laxmi Chand Tyagi, co-founder of GRAVIS, who hit upon the idea of using rainwater to recharge underground aquifers, which could then possibly yield enough to meet the year-long irrigation needs for many years to come. Little did the team realise just how much the limitations in local geology would transform into advantages. 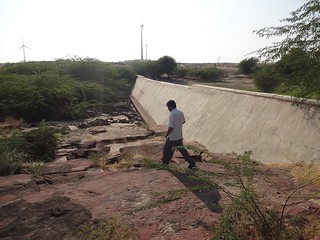 The ferocious seasonal river turned to be the ideal source for recharge purposes because of its large catchment area. An anicut or small dam was built on the river to store and slow down the surface water runoff. This also helped halt the annual erosion of fertile farm soil. Sandstone, a common geological feature of this area, became a friend to this effort as it contains a large number of pores that could absorb water and replenish underground aquifers.

The VDC generated around 20 percent of the cost of the anicut’s construction in the form of labour and material. The very first year itself, the villagers experienced the might of the work they had done. “It rained as usual but the structure was filled to capacity. We could not believe our eyes and took shelter on a hilltop fearing the dam would burst taking the village along”, recalls Mangla Ram, one of the VDC members. Baadi never looked back from then on. From counting rainy days, the village has now moved to counting the years since they started taking crops in two seasons. The year-on-year annual storage has helped recharge the groundwater and today, the water table is only as low as 100 feet despite around 70 tubewells installed in the village.

A farm of one bigha (0.6 hectare) fetches a profit of Rs 10,000 every year, and distress migration has completely stopped. Farmers have also increased their landholdings. Chotu Singh, whose father Jalam Singh was the president of the VDC for several years, has increased his farm land from 12 hectares in the 1990s to 48 hectares today. “People still migrate but that’s only when somebody gets a good job. In fact, water has made many people come and settle down at Baadi. From the original 30, the number of families has gone up to 75 today”, says Chotu Singh. 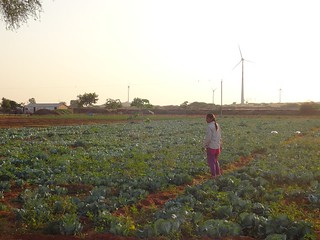 The composition of livestock has also undergone a sea of change. Earlier, very few families had cows and buffaloes; goats were the mainstay for most farmers since they are cheap and can survive on less grass. But now, the number of cows and buffaloes has gone up by 10 times thanks to assured irrigation.

However, more than setting up of a resource, it is the management that guarantees its success and Baadi realised that from the get go. “GRAVIS handed over the structure to us once it was ready. From then on, we have been maintaining it through our own funds. Four years back we made Rs 25,000 by selling of Israeli babool growing on the river bed. The farmers further contributed money to get the necessary repair work of the structure done”, says Mangla Ram, a VDC member.

The success story of Baadi has travelled places and many government and non-government organisations have replicated the model at other locations including Salori and Nehruva villages of the Jodhpur region.