ARTICLES
Why rivers don’t flow anymore
In a two-part series, we look at the health of rivers across India. Here’s a comprehensive assessment of the rivers of the north and the east.

A villager washes utensils in the black water coming out of the coal mines at Kodkel in Raigarh district, Chattisgarh.

Rivers in India are always in the news whether it’s the interstate water sharing disputes, dams, sand mining or the recent order of the Uttarakhand high court declaring Ganga and Yamuna as living entities. Seven major river systems, over 400 rivers and numerous streams have sustained lives and livelihoods in India for centuries. Enormous pressure from faulty management practices is confining these lifelines to dams and canals, encroaching their space, pouring untreated sewage into them, and lifting sands from their banks. Add to these, other practices like groundwater extraction, farm runoff, deforestation and climate change, and we are staring at the biggest crisis of our times.

The eastern quandary
The eastern rivers, namely those that flow in the north and eastern states--West Bengal, Bihar, Orissa, Jharkhand, and Chattisgarh--are spread over several major basins, predominantly the Brahmaputra and the Barak basins, with the addition of a few rivers that flow into Burma. Rivers of the other eastern states form part of the Ganges and the Mahanadi basins. The issues facing these rivers can be classified on the basis of their geography. The rivers in the mountains, specifically the northeastern Himalayas, are “damned” from extensive dam construction while those in the plains are struggling with pollution.

Water pollution: Both domestic and industrial pollution are crucial issues in the industry and mining-dominated areas of Orissa and Chattisgarh. According to Central Water Commission’s (CWC) Status of Trace and Toxic Metals in Indian Rivers Report, 2014, 12 sites in the Mahanadi basin and three sites in the Godavari basin had heavy metal contamination.

The West Bengal Pollution Control Board (WBPCB) identified 54 major drains which pollute the Bhagirathi-Hooghly river. Around 20 major canals also contribute 1,650 million litres of wastewater into the river per day.  Many of the 37 sewage treatment plants built so far under the Ganga Action Plan are now defunct.

In Jharkhand, about 130 million litres of industrial effluents, largely from government-owned industries, and 65 million litres of untreated domestic wastewater find their way into the Damodar drainage system every day. Today, Damodar is a picture of sewage canal shrunken and filled with filth and other waste, emanating obnoxious odours.

The Comptroller and Auditor General of India has expressed deep concerns over widespread river pollution in Orissa. As per the report published by the Central Pollution Control Board (CPCB) in February 2015, 12 rivers in Odisha are affected by pollution. Illegal withdrawal and dumping of pollutants including fly ash by industries threaten the existence of most of the rivers.

Mining and rivers: Large scale mining has adversely affected groundwater table in many areas resulting in the wells in the adjoining villages drying up. Acid mine drainage, liquid effluents from coal handling plants, colliery workshops and mine sites and suspended solids from coal washeries have caused serious water pollution in the region, adversely affecting the fish and aquatic life.

In Jharkhand, Karo river in the West Singhbhum is polluted with red oxide from the iron ore mines of Noamundi, Gua and Chiria. Subarnarekha gets metallic and dissolved toxic wastes from Tata Steel Plant, Jamshedpur and Hindustan Copper Limited, Ghatsila, and radioactive wastes from the uranium mill and tailing ponds of the Uranium Corporation of India Limited. These mines annually pump out millions of litres to drain mine galleries and release it into nearby watercourses causing flooding, silting, water logging and pollution in the mining areas of Jharkhand and Orissa.

Mining is also playing a significant role in Garo Hills of Meghalaya which has an estimated coal reserve of 559 million tonnes.

Most of the rivers in the northeastern states are under the threat of mega dams, irrigation projects and development of waterways, facilitating India‘s Look East Policy for trade and commerce with the South and Southeast Asia. Rivers in the Barak basin are mostly targeted for hydropower generation while transboundary rivers of Nagaland and Mizoram such as Tizu and Kaladan are targeted for waterway projects such as Kaladan Multimodal Transit Transport Project. Mega-dams already built and also proposed over transboundary rivers such as the Myntdu Leshka Hydroelectric Project in Meghalaya and the 1500 MW Tipaimukh Multipurpose Hydroelectric Project in Manipur are opposed by the communities in the downstream areas in Bangladesh.

Deforestation: According to the India State of Forest Report 2015, there has been a decrease of 628 sq km of forest cover in the north and the east regions which has resulted in the reduced flow of all rivers. The extensive deforestation has also led to the emergence of a new phenomenon--increased floods in monsoon periods. The forests have suffered due to pressure on land, decreasing cycle of shifting cultivation, exploitation of forest for timber and the lack of scientific management strategy.

As a result of the large-scale conversion of forest land to cropland, particularly tea plantations in the northeast India, there has been a 20 percent reduction in green cover in the core monsoon zone.

North facing mountain issues
Whether their origins are glacial or spring, rivers in the northern India are increasingly characterised by conflict. The nation’s desire for hydropower is in conflict with the local communities’ dependence on healthy ecosystems for their livelihoods. This is further complicated by the international nature of the river basins.

The northern region is home to two major river systems--the Indus which flows towards the Arabian Sea and the Ganga which flows towards the Bay of Bengal. The Indus river system includes  Zanskar, Shyok, Nubra, Hunza along with Jhelum, Chenab, Ravi, Beas and Sutlej as its principal tributaries. The main stem of the Indus originates in Tibet on the northern face of the Kailash range. It enters India in Kashmir and crosses the Himalayas before entering Pakistan. The Indus and its principal tributaries are snow-fed rivers, which means that they have high flows in summer (due to snowmelt) as well as in the monsoon. The massive Ganga river system stretches from Uttarakhand to the Bay of Bengal and extends across 11 states and four countries. The primary tributaries of the Ganga are Yamuna, Son, Ramganga, Ghaghra, Gandak, Kosi and Mahananda.

Both river systems and their component rivers face problems both of quality and of quantity, as well as basin-level problems of catchment degradation and loss of connectivity.

Construction of dams: The mountain topography and perennial flows of the northern rivers make them attractive for the construction of dams. Unfortunately, these dams have proliferated to the extent of virtually wiping out all flows in the river system. The map below illustrates how almost the entire length of the Bhagirathi is either diverted through tunnels or rendered stagnant behind dams.

This situation is true for nearly all the rivers in the Himalayas. Several people’s movements have tried to counter the rampant construction of dams with varying degrees of success. Even if environmentalists and local communities win the battle to save their rivers, it may be negated with a change in the government. In December 2012,  after a prolonged struggle by G.D. Agarwal against the construction of a series of dams on the ecologically fragile Bhagirathi, the first 100 kilometers of the Bhagirathi river was declared an eco-sensitive zone. By 2016, the Centre started discussing possible amendments to this declaration. In recent years, rising nationalism has spurred an increase in dam construction on transboundary rivers. This is most obvious in the case of the Brahmaputra where India is using China’s proposed Zangmu dam to justify a dam building spree downstream, despite evidence that the Brahmaputra acquires most of its water within India rather than in the arid Tibetan plateau. This is also true in the case of the Indus where hostility with Pakistan is being used to create dissatisfaction with the Indus Water Treaty, which has so far been considered an excellent example of a working water treaty. 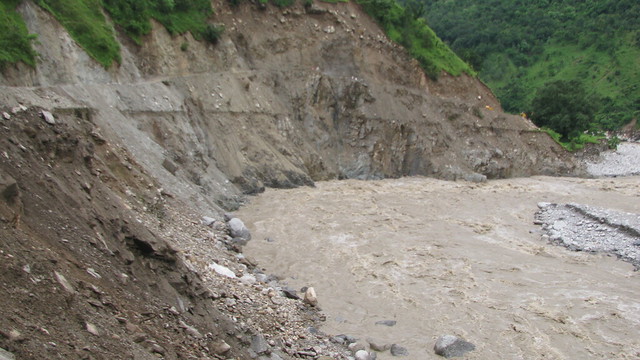 Climate change: With the majority of rivers being snow-fed, climate change is expected to impact flows to a large extent. Studies indicate that while in later years, diminished glaciers will result in a corresponding decrease in flows, the immediate result of increased melt may be unexpected surges. This was very recently demonstrated in Canada where the Slims river disappeared completely within a span of four days. The receding glacier which feeds the river melted enough to cause a flood, which diverted the water into another streambed. Climate change-related floods are not new in Uttarakhand. Presently, climate change manifests itself in the Himalayas in the form of intense and unseasonal episodes of rain. This leads to floods nearly every year, the most horrifying of which was the glacial lake outburst flood of 2013, which caused deaths of thousands of people.

Water pollution: Water quality in the upper reaches of the rivers is still largely acceptable. However, this is being threatened with the increase in townships that release untreated sewage into the river. Besides the sewage, there is evidence that construction in a catchment area can have detrimental effects on stream quality.

To read about the south and west rivers, click here.