Seetha Gopalakrishnan
07 Jan, 2017 . 8 mins read
While sundry development and infrastructure projects beautify the Chennai coastline, fishermen are left to fend for themselves.

Chennai coast on a busy day.

Going by the statistics from the Central Marine Fisheries Research Institute, Tamil Nadu’s coastline is densely populated with 573 fishing villages along 13 coastal districts. The story is slightly different around the urban and peri-urban coastline, thanks to the ongoing gentrification of the coastline in most parts of urban India. Traditional fishing hamlets are slowly giving way to plush beachfront properties. Spaces frequented by fishers are often viewed as “eyesores” on pristine beach stretches. More often than not, the rights and livelihoods of fishing communities are often relegated to obscurity in comparison to coastal infrastructure and real estate development.

Chennai’s famed Elliot’s beach in Besant Nagar was once a thriving site for fish landing and sorting. Overtime, hygiene concerns of the walkers and joggers took precedence over the livelihood concerns of local fishers and now fishing activities are restricted between the broken bridge across the Adyar estuary and Urur Kuppam, north of Elliot’s Beach. This story is being repeated in the adjacent neighbourhood of Tiruvanmiyur. Recreation is slowly taking precedence over livelihoods. Tiruvanmiyur Kuppam, which was originally a fishing hamlet, has been transformed into one of the many upscale neighbourhoods along the east coast. Fishermen are no longer allowed to dry their catch along the shore as members of the East Coast Beach Walkers Association find it repulsive. Demands have been put forward by the association to ensure the beach stretch up to Kottivakkam Kuppam is freed of fish hauling and drying. 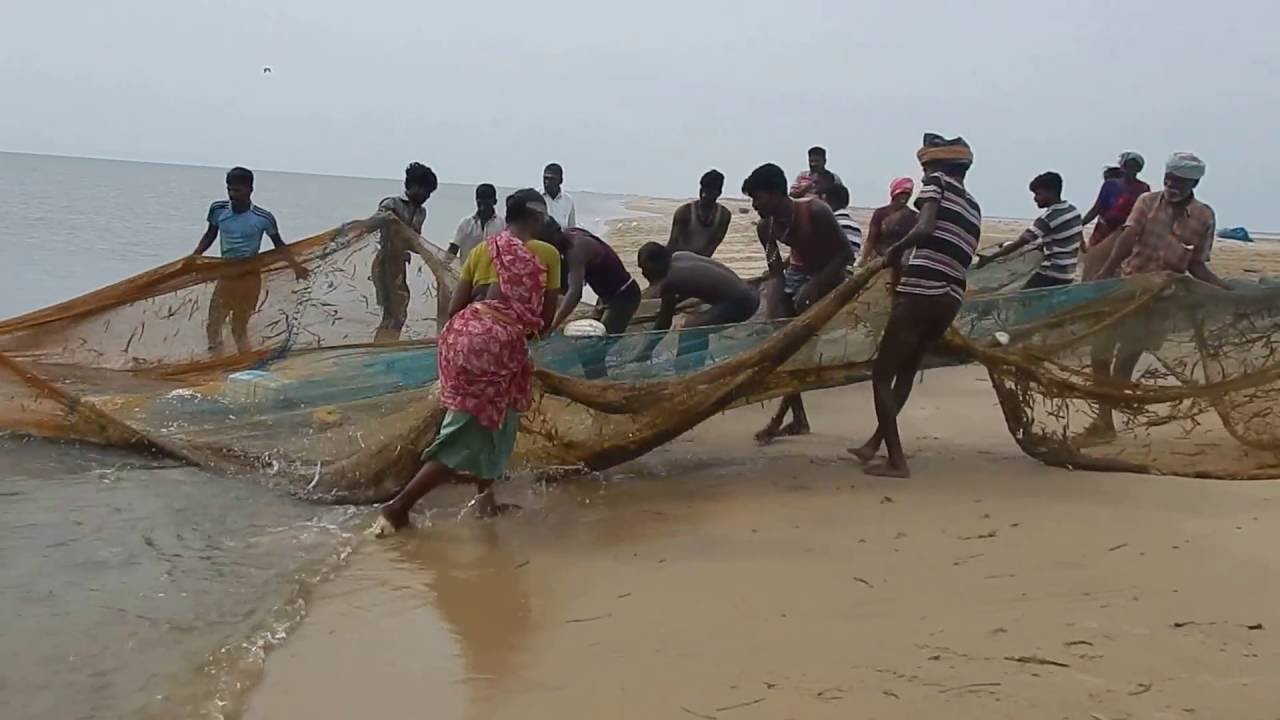 Fishermen in the area are used to wielding the periya valai, huge communal shore seines or dragnets--with the length ranging from 1.5 km to 3 km--which are cast from the shore. At least 20 people are required to cast and drag these nets to pull out the fish which thrive close to the shore. “Practices like this require a lot of space which is now becoming a rarity along the urban stretches. Though periya valai are still used in traditional fishing villages in the city such as Urur Kuppam and Tiruvanmiyur Kuppam, their number, and frequency of use is consistently diminishing,” says Pooja Kumar of The Coastal Resource Centre.

As we move further away from the city, resorts and private beaches turn villains. The coastal stretch between Chennai and Puducherry abound with innumerable townships and beach resorts developed illegally along the strict no-go zones on the seaward side under the Coastal Regulation Zone (CRZ). More recently, close to 100 acres of beach and adjoining land near Marakkanam were taken over illegally by an established Chennai-based construction company to develop a small township of 200 plots. The locals’ awareness of legal provisions and land use came to the rescue as the residents of nearby Alamparai Kuppam raised an alarm following which a show cause notice was issued by the Tamil Nadu Pollution Control Board (TNPCB). The township now stands demolished.

The CRZ notification clearly forbids any new construction on coastal land up to 500 metres from the sea’s high-tide line. It also makes it mandatory for the government to map land and sea use of fishing villages along the coast. Neither has the mapping been done nor has there been any proactive enforcement of the CRZ regulation. The Coastal Resource Centre has been involved in creating legal awareness regarding the CRZ rules in addition to training people in mapping their land use.

Recreation and beachfront real estate development aside, here's a bigger enemy in the garb of “public good” lurking around the north and the south of the city.

One of Chennai’s northern-most industrial suburbs, Ennore and its surrounding hamlets were once thriving fishing villages. While the hamlets of Mugadwara Kuppam, Sivanpadaiveedhi and Kaattu Kuppam fish mainly in the brackish waters of the Ennore creek, the livelihood of a host of other villages including the Kaattupalli Kuppam is entirely dependent on the sea and the shores of the Bay of Bengal.

The residents of hamlets in and around Ennore have been displaced in the past to enable the construction of power generation complexes. The village of Mugadwara Kuppam was shifted from the north of the creek where the thermal power plant was to come up to a more southerly spot. Solely relying on the government’s promise of one job per family, villagers left behind titled land to settle in spaces where they could be evicted from at any time. More recently, the hamlet of Kattupalli Kuppam was shifted two kilometers inland to facilitate the setting up of the Kattupalli shipyard and captive port complex along the coast. 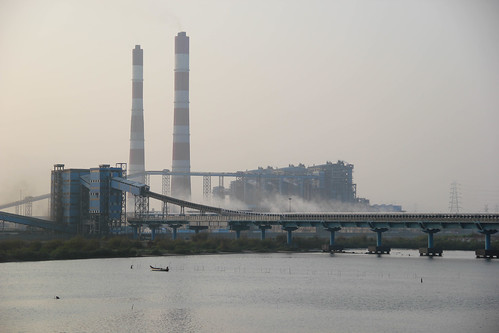 Despite all this, the problem in Ennore is not so much of space as that of environmental and ecological degradation. The Ennore Thermal Power Plant and the North Chennai Thermal Power Station are repeat offenders involved in systematically damaging the creek. Sustained land reclamation and heavy siltation have left the creek shallow at many points.

“Pipes carrying fly ash slurry from the power plants to storage ponds leak perpetually, leaving the creek solidified in most places. Stretches, where the creek went as deep as nine to 10 feet, have now been concretised. In addition, dredged sand from the Kamarajar port expansion activities in the north has clogged the creek for kilometres, making life miserable for local fishers,” narrates R.L. Srinivasan of the Ennore Anaithu Minava Grama Kootamaipu (Ennore All Fisher Village Coalition). Kamarajar port had, in early December, promised to remove dredged sand from the salt pan lands. The work is yet to commence.

The point where the creek opens into the sea is characterised by an orderly mixing of fresh and saline water resulting in a brackish environment favouring certain species of fish and prawn. “Mudflats in the area have long since disappeared, taking along with them a majority of fish, prawn and crab species which once thrived in the area. With the mangroves systematically destroyed and the natural water exchange between the creek and sea severely compromised, we have lost close to 70 percent of the eraal (prawn) catch in the marshy patches of the creek,” rues Srinivasan.

Another example of “public good” disrupting local livelihoods is the 100 MLD (million litres per day) seawater desalination plant which came up in the village of Nemmeli, around 40 km south of Chennai in 2013. The prohibitive cost of cleaning up salt water to potable standards aside, the plant lets out 60 MLD of highly saline brine reject for every 40 MLD it desalinates. Huge pipes carry the brine reject into the Bay of Bengal, but stop well short of the 600-metre distance into the sea as mandated by MoEFCC. As a result, all the hypersaline reject is let out right on the beach.

The problem the fishers of Nemmeli face is two-fold: Loss of space closely tied to their livelihood along the beach due to erosion and increased salinity along the coast. Fishermen claim the fish catch has reduced by over 50 percent in the area due to increased turbidity and high salinity which drive away the fish from their usual congregation grounds.

Along with sea water, the inlet pipes suck in fish and fry alike. The outlet pipes with their concentrated brine mixture, however, have proven to be more damaging. “Before the plant came up in 2013, the sea was filled with fish and prawns. We just had to go in for about 5 km and even in a small boat manned by four people, each of us was able to earn Rs 1000 – Rs 1500 every day. Now we are forced to venture 10 – 15 km out into the sea and still do not secure even half of our previous catch,” remarks Santhosh, a resident of Sulerikattu Kuppam. 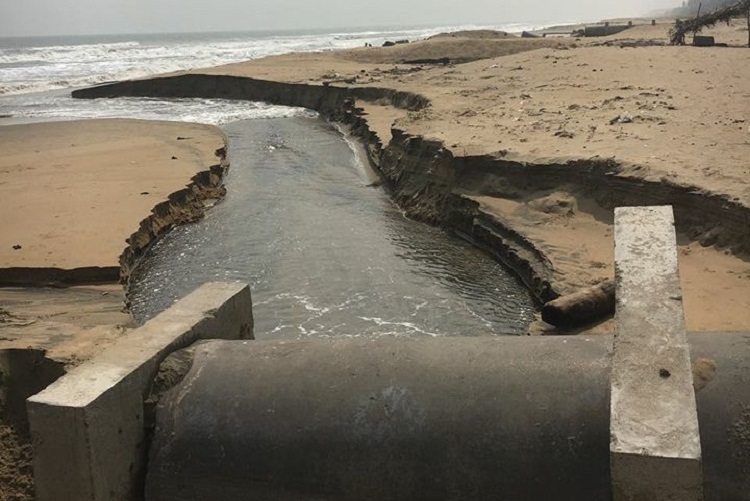 Along the coast, stone beds were laid to support massive pipes that lead in and out of the desalination plant. This has severely hampered the use of shore seines in the village. “Long, undisturbed stretches of beach is required for the use of the periya valai where almost the entire village fishes together. Between January and May, each of these nets used to earn us a catch of close to Rs 10 lakh; six of them sit idly in our village now. We cannot risk damaging these nets on the stony shore. Each of these costs Rs 2 - 3 lakh,” adds Santhosh.

As if the 100 MLD plant wasn’t enough, the state government has proposed the setting up of two more plants with 150 MLD and 400 MLD desalination capacity very close to the present one. Since the health of the sea is under question, anxious residents of Nemmeli Kuppam, just north of the Sulerikattu Kuppam where the current plant is located, remain on high alert. “We have been petitioning and protesting, but the construction of the 150 MLD plant is almost complete. There’s little we can do now,” remarks Santhosh. Vocal resistance, however, is quite low now. Experiences of the past, watching rebellious neighbours from Sulerikattu Kuppam terrorised by the state police for rising up in protest three years ago, has taught them better.

While the community has been able to express its concerns in one voice across most coastal districts in the state, the relatively more urbanised districts of Chennai and Kancheepuram have struggled with it a great deal. Ramya Rajagopalan of the International Collective in Support of Fishworkers (ICSF) considers this as an extension of the city-bred mentality where one tends to focus only on one’s own problems. “To be effectively heard, the fishers of north Chennai have to stand as one with their brothers in Nemmeli. But that rarely happens in urban areas,” she adds. A lethal combination of lack of space, credit and market facilities in addition to the absence of a strong coastal zone management committee to forward their demands could be possible triggers of such a hamlet-centric approach along urban stretches.

“The sea and the seashore are inextricably linked to fishermen’s livelihoods. A fisherman sails into the sea for his daily catch, but without the shore’s support, his day’s work will not be complete. From reeling in the nets to drying the catch, the shore is an integral part of fishers’ everyday life,” remarks Saravanan of the Chennai-based Coastal Resource Centre. When infrastructure, both public and private, are planned right along the coast at manic speed, the very subsistence of the fishing community is jeopardised beyond imagination.