Saaf Mathe Ka Samaaj: A treasure of essays on life and water

Anupam Mishra
19 Nov, 2015 . 9 min read
In our blind pursuit of progress, has the equation between man and nature been lost? Anupam Mishra talks about people, the environment and the mislaid empathy between the two.

‘Saaf Mathe Ka Samaaj’ is a compilation of 23 essays on people, land, air and water, on issues and concerns that plague them, and the deep and direct connect between society and the environment they live in. Anupam Mishra is a simple, down to earth man and a true Gandhian. His writing portrays his love for travel, the environment and the spirit of the people he meets. With deep wisdom and understanding, he writes here on the lives of men and women, their lands and waters and also their tough trials and sweet victories.

He writes of the golden desert where clouds are seen rarely but recognised by 40 different names in the local dialect. He talks of the ancient system of earthquake-resistant buildings, of the forgotten life of living with the floods and also the lost people displaced by energy-spitting dams. He offers us a glimpse of the world around us, in a simple, yet lyrical fashion. "Better than writing something worth reading is doing something worth writing", says Anupamji.  Each essay resounds with that sentiment, and his characteristic wit and profound wisdom make each piece a delightful read. Translated excerpts of the introduction and a few essays from the book are summarised below:

Sun is called ‘peeth’, another name for water. After all it is the sun that rules the water cycle and brings in the rains.

All that we see around us has evolved from water itself. Human history is deeply entwined with water, and most civilisations have blossomed near rivers. All ancient and important cities in the world are found near river banks even today. Even the land locked villages grew close to some tiny rivulet or were dotted with ponds and forests. The earth was still green, the water in the rivers would still gurgle and sing, and the trees still sway to the music of the waters. Truthfully speaking, water, trees and land are not simply the face of nature, but a part of its soul, and man has always had a spiritual connect with it since time immemorial. Today's modern outlook has changed this completely. In the name of progress, the equation between man and nature has become skewered and unbalanced, catering only to the needs of the human race, and placing the life of animals and plants in grave jeopardy.

As we look for solace and a way out of this mess, this book By Anupamji, shows a beacon of light. His essays traverse through language and environment, droughts and floods, society and nature.

A drought: Of right thought and correct action too 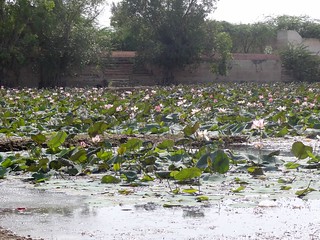 Drought does not come alone or unannounced. It is preceded by deficiency of good thoughts and good work. It does not happen overnight; Once monsoon season is over, there is enough time to gather and understand the indications as to which areas have been rain deficient.  Why is that even when we know in advance the likelihood of drought, our water using capacity never diminishes?  People in Alwar have differed. They have not interlinked their rivers, but forged stronger links with their rivers and their ponds. With good thinking and strong action, in spite of rainfall scarcity, people have sidelined drought to a mere spectator on the embankment of their water bodies itself.

Huge dams built in Gujarat, MP, Maharashtra and even Rajasthan for the development of the states are like the horse in the 'Ashwamedha yagya’. Just as none of the smaller kings had the courage to rein in the horse, not one of the states had a say in the building of the dam, but all are in constant debate on who gets how much share of water. Everyone eyes the huge electricity potential, no one talks of the lost land or the displaced people. But talks of the environmental impact of these dams need to be aired, of people who lost their homes and hearths. So a welfare government must hold the yagya, but only of a size that is possible, so that in case of a mishap there is only governmental loss, and not a loss of people and generations yet to come.

Tremors of an earthquake

What was the cause of the untold havoc caused by the October earthquake in Uttarakhand. Many plausible reasons have been cited by scientists and experts, and the construction materials in new buildings  seem to share the blame for the tremendous loss and devastation caused by the shuddering and broken houses. Today we discuss earthquake resistant structures and demand the technology behind these for reconstructing homes in Uttarakhand. This seems to underline 2 facts that people  who have lived for centuries in Uttarakhand are bereft of this knowledge, and also this secret science is understood only by an elite few. Maybe it’s time that we look at the construction followed for centuries in this hilly area. The houses had small doors and small windows for lesser heat dissipation, but this characteristic also ensured that the walls retained their strength. Double storey houses were common, where the house followed the natural slope of the hills. Another interesting concept was that no house would be higher than the mandir,  which too were never built very tall. A good example is the Badrinath temple.

People from the hills live under tall mountain ranges which they view with love and affection. We have no right to comment on the durability or earthquake resistance capability of double storey houses in Uttarakhand, especially if we look at the absurd monstrosities we churn out in our cities.

The tussle between development and environment is nothing new, it still continues unabated. What needs to be understand is its inequitable distribution. The powerful steal the rights of the less empowered with impunity.  Delhi will not only use the water from Yamuna, but for increasing thirst, drag water from the faraway Ganga River too. We seem hell bent on destroying our planet in the name of modern science, technology and development, and guzzling up its finite resources not simply for our need but our greed. We not only seize everything from nature, and also pollute it in the process. Everything today is an industry, including agriculture, building dams and water supply systems.  We need to nurture our environmental consciousness, else a small part of society will consume a  much larger share of resources. Until we understand this difference between random talk and concrete action, observing environment day will continue to be just another paper celebration.

Do you know that only 3 plants- wheat, rice and corn, contribute to 75% of the food that we eat? India has always been wealthy in seeds, and till about 80 years back, we cultivated nearly 30,000 types of rice. Each type had its own taste, own water requirements and own resistance to pests and the ever changing climate nuances. Today most countries, including ours, have lost these traditional varieties of seeds fruits to large corporate. This means losing our indigenous seeds to new merchants, who are in truth businessmen dealing in petrol, pharmaceuticals, pesticides and fertilisers. And with them a market for pesticides, chemical fertilisers have found a footing. Seeds and their history have been hijacked, and we have forgotten that it is the farmers who are the true guardians of agriculture. They are the true custodians of the seeds, not the corporate.

Gopalpura: Where neither the people settled nor the trees survived

In 1800, under Diwan Punneya’s rule in Malnad,Karnatak, 11 lakh rupees were earmarked for the yearly maintainanace of ponds

In the news for quite some time, this village faced both bouquets and brickbats equally. It is the story of a small village where the villagers with great initiative constructed ponds to tide them over water scarcity, and then planted trees in the dry, barren catchment area around it. The safety and protection of the trees was exercised by the village panchayat, and not the government appointed people. On another axis, bonded labourers were released in Nuh, Haryana and the government decided to settle them in the Gopalpurs’s forest area,. To make a long story short, today there are neither the labourers live there, nor do the trees.

Rajasthan: A penance of soil, water and fire

Rajasthan is nearly twice the size of England. A desert, it has large sand dunes called ‘Dhaure’, that seem to travel to and fro when the hot summer winds blow. In certain areas it is not only the water that is saline, but the soil too is salty. But the language of this desert is beyond the scientific definition of soil, rain and heat. Clouds may be a rarity here, but their names are numerous. They are classified and tagged as per their shape, size, movement, colour and also the height at which they float. Here even the rains in different months have distinct names.A culture that understands clouds and recognises that the lazy cloud will simply saunter across the sky and the dark cloud will bring in some rains, how much must they value each precious drop of water that these clouds bestow on them. They have added their sweat and hard work to ensure that each raindrop is collected and saved in this thirsty land.

A society with an open mind and heart 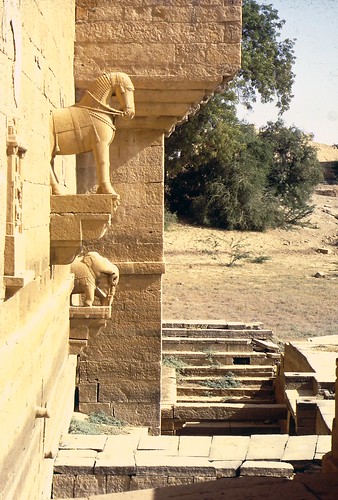 A pond teems with life and water ebbs and rises periodically in it. Rain washes the soil at the sides and dissolves the mud at the bottom. Ponds undergo a cyclic life, and people who honoured and protected these, too followed a cyclic ritual systematically. Stone pillars greeted one as soon as one entered the area near these water bodies. People consciously kept the area clean, no shoes, no spitting and definitely no dumping of any garbage. The embankments had an array of trees, and shared a symbiotic relationship, neither capable of surviving without the other. Celebrations marked the desilting process of the ponds, when the whole village came together to clean it. Every part of the country has its own individual story, the ground was dug, mud was heaped, and society celebrated it.  The mud removed was shared by farmers, to be used in their fields. Only when everyone helped everybody around, were ponds created and then maintained. Today, society has cut itself from these water bodies; hence pond cleaning is viewed more as a chore and headache. Then the society had an open, clean mind and heart, they believed the silt in the ponds to be boon, not a bane.

The complete book 'Saaf mathe ka samaaj', in Hindi, may be downloaded from below.

India Water Portal acknowledges the support of Anupam Mishra in making this publication available to us.