Let's not only blame Punjab's farmers for lighting up!

A few days ago, there were news items galore with NASA's images of the burning of rice straw in Punjab. The red dots were presumed to be the fields on fire and though no scientific assessment has yet been made, it is also believed that the smoke is causing smog as far as Delhi. But that is only one side of the story.

That the farmers themselves suffer the most from the burning is evident from a study done by the Institute for Social and Economic Change, which found that people in rural Punjab spend Rs 7.6 crore every year on treating ailments caused by the burning of the straw. The loss to the farmers, however, goes beyond medical expenses as their fields also lose out on essential nutrients and moisture. Though there is a complete ban on straw burning, it can't be strictly implemented due to social and political circumstances.

Traditionally, rice was cut manually and straw collected for use as fodder and as well as bedding for the animals. This changed with the introduction of combine harvesters in the 1980s. Now, paddy could be cut and threshed in a single operation, but that left the straw on the ground. The combine harvester also cuts the crop 8 inches above the ground, thus leaving the more digestible stem stuck in the soil. The upper part, being high in silica, doesn’t make for good fodder especially when compared to the wheat residue and commercial feed.

The small window of around 15 days between the harvesting of rice and the sowing of wheat along with the non-availability of labour pushes farmers towards the easy option--that of burning the straw. Farmers also report a direct benefit of less pests and weeds in the subsequent crop. 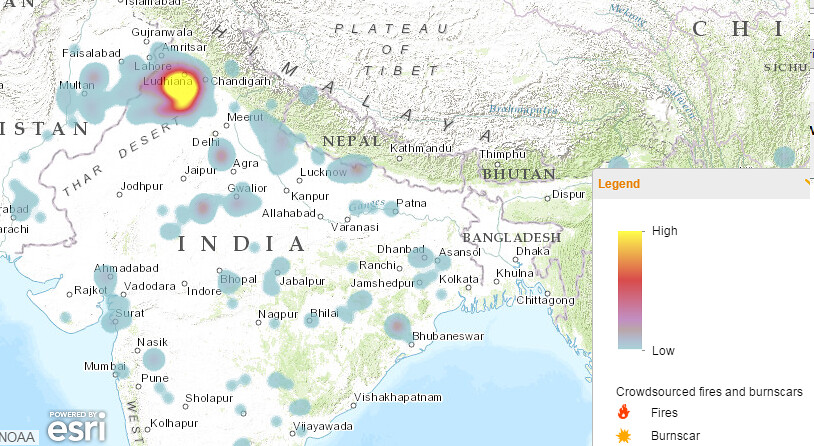 Loss of nutrients and moisture

Punjab produces over 17 million tonnes of rice straw which is high in nutrients. Every tonne of straw has large amounts of potassium (18.9 kg per tonne) besides nitrogen (6.2 kg per tonne) and phosphorous (1.1 kg per tonne). It also contains about 9-11 kg per tonne of sulphur, 100 g zinc, 777 g iron and 745g manganese--all nutrients required by crops for good growth--thus making burning a drain on the available resources and soil moisture.

On the other hand, the use of rice straw as mulch (a protective cover on the soil) not only provides nutrients but also reduces the water requirement of subsequent crops by 3-11 percent. A study found that fields with mulch produced 40 percent higher root length densities of subsequent crop compared to no-mulch, probably due to greater retention of soil moisture in the deeper layers.

Use of rice straw as mulch (a protective cover on the soil) provides nutrients, reduces water requirement of subsequent crops by 3-11 percent and produce 40 percent higher root length densities.

High soil temperature and water content under mulch also increases the mineralisation of soil nitrogen resulting in a yield gain in different crops from 4 to 29 percent. Gurtej Singh of Mehatpur village near Jalandhar uses 2 quintals of straw generated from his 3-acre paddy field as mulch for vegetables as well as bedding in his animal shed.

“The potatoes I grow with mulch require only one round of irrigation and are larger in size than those without mulch. I also prefer to keep the straw in the store as aged straw retains moisture better”, he says. The stalk left intact in the field is ploughed back into the soil and also acts as thin mulch for the wheat crop. However, a study found that the beneficial effect of mulching rice straw in wheat crop appears only in the fourth year. Another study found that on a short-term basis, the incorporation of rice straw in the field costs around 11 percent more than burning, mainly due to labour engagement. Straw burning thus signifies that most farmers engaged in commercial farming are likely to see immediate costs rather than longer-term gains. 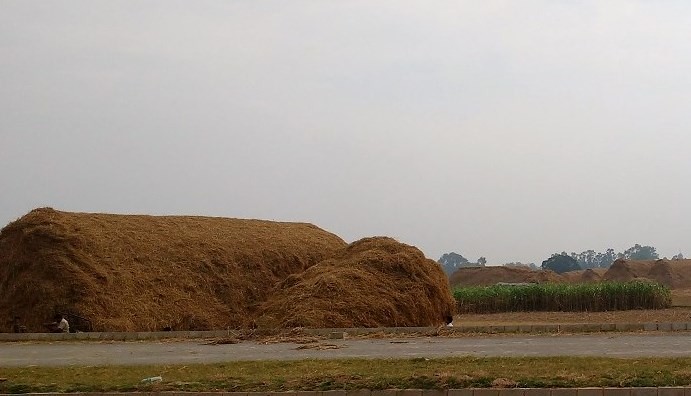 ction of rice straw is still prevalent among nomadic communities like the Gujjars who don’t own land but keep a large number of livestock. They pay the farmers around Rs 3,500 per acre to collect the straw as fodder for their animals but this is localised to a very few pockets adjoining the hills. Small farmers are also more likely to harvest rice manually and put the straw to some use.

Seven bio-mass-based power plants of 62.5 MW capacity have been set up in Punjab, which procure the rice straw from farmers at Rs 1.50 per kg. As many as 13 more are under execution and will be commissioned next year. Cardboard factories also buy the rice straw. In Fazilka district, Zamindara Farm Solutions has been providing farm equipment on rent to small farmers with the support of National Bank for Agriculture and Rural Development (NABARD).

“We have helped 1,200 farmer families make a living out of selling crop residue to power plants, dairies and cardboard factories. Unemployed village boys in Muktsar and Fazilka areas chop, collect and bundle the straw while farmers save over Rs 4,000 per acre that they would have to spend on extra ploughing, irrigation and fertilizer”, says Vikram Ahuja, the company director.

However, individual farmers have faced issues like delay in payments or no assured procurement which puts them off. "There were two biomass power plants in our area. One has shut down and another has been defaulting on payments. Why would a farmer trust them next season?", asks Gurtej Singh.

Among mechanical alternatives Happy Seeder, a tractor-mounted machine that cuts and lifts the rice straw, sows wheat into the bare soil and deposits the straw over the sown area as mulch, is emerging as a good option. An economic analysis found that the use of the Happy Seeder saved the farmer around Rs 1,000 per farm thanks to reduced expenditure on preparing the field and fertilizer. The government of Punjab has been offering a 40 percent subsidy on the Happy Seeder which costs around Rs 1.25 lakh.

"The state government distributed 1,600 Happy Seeders among cooperative societies which let them out to interested farmers. However, a very small area can be covered with these many machines", says P S Rangi, consultant with the Punjab State Farmers' Commission. The Happy Seeders also require the loose rice straw to be uniformly spread over the field thus requiring additional labour.

A good crop alternative is the basmati variety of rice as it is harvested manually and its residue also makes good quality fodder. However, basmati's prices are dependent on the international markets, and that has weakened over the last two years.

A good crop alternative is the basmati variety of rice. Since basmati fetches a higher price, it is harvested manually to avoid loss of grains associated with mechanical harvesting. Its residue also makes good quality fodder. However, basmati's prices are dependent on the international markets, and that has weakened over the last two years. The price of basmati came down from Rs 4,000-Rs 5,500 per quintal in 2013 to Rs 1,200-2,000 this year. This will encourage farmers to grow non-basmati varieties that will at least fetch them the assured minimum support price.

Most of these alternatives remain successful but only in isolated conditions, which is why straw burning may not abate in the near future unless the rice-wheat cycle is disrupted. That is also not likely to happen any time soon thanks to market interest.

We can safely expect many more years of straw burning and alarming satellite images, but let's not just blame the farmer. We are very much a part of the reason that they light up.