Sacchidanand Bharti - in his own words

Chicu Lokgariwar
Sacchidanand Bharti
15 Jul, 2013 . 9 mins read
The environmental conservation efforts in Ufrenkhal have been written about for nearly three decades but always by others. Here is the story in the protagonist's own words.

Reams have been written about Sacchidanand Bharti, of Ufrenkhal fame and his work on afforestation and water conservation. However, very rarely does he speak about his own efforts and experiences. One such rare occasion was Environment Day on June 5th 2013 when he delivered the S. L. Shah Memorial lecture organised by the Central Himalayan Environment Association (CHEA), an NGO that focuses on water management and improving livelihoods of people in the mountain states.

During this lecture, Bharti spoke not only of the work that was started in Ufrenkhal and now being carried out in 140 villages, but also of his youth and the experiences that led to this work. As a student, he was witness to the Chipko movement that used non-violent resistance to protect trees from being felled by hugging them. He also had the opportunity to learn from Chandi Prasad Bhatt, a Gandhian working towards self-sufficiency in the Himalayan villages.

This inspired him to protest against tree felling in Dudhatoli, near his village. The successful conclusion of that protest then led to the creation of Mahila Mangal Dals, a women's groups dedicated to constructive activities and afforestation work in Ufrenkhal. At its peak, the villagers were planting 4-5 lakh saplings every year.

The pan-India drought in 1987 was the worst in the century, and affected about 60% of the crop area and 285 million people. It was this drought that led Bharti and the villagers to start digging pits to store enough water to tide their planted trees through dry spells. Water conservation then, was only a means to save trees.

His conversations with Anupam Mishra made Bharti realise the importance of water conservation. Since then, he has been working on conserving rainwater and so rejuvenating springs. Now, the Ufrenkhal area is a Mecca for people and organisations wishing to learn about soil and water conservation.

Lecture by Sacchidanand Bharti
I come from a very small village in Uttarakhand, where I do very insignificant work. It is your generosity that has given prominence to this work.

Which part of this country does not face a crisis of water and forests today? We too, in Uttarakhand are struggling with this. Our forests were dense, and water was sufficient. Today, a lot of water- some 1300 mm- rains down on us. But it all flows down to the valleys. And our villages remain thirsty.

In the last few years, our forests have been cut, laid to ruin. But the people of Uttarakhand who live in these villages, are fully acquainted with meeting crises but we had forgotten this. Some 40 years ago, I was reminded of this tradition.

I was a student when the Chipko movement began. Today many people who participated in that are sitting here. That was a school for us, and Chandi Prasad Bhatt was the principal of that school. In 1975-76, the forests were being auctioned off, and I was a student in Gopeshwar. We were protesting against it in Nainital when Saile hall was burnt and we were arrested. We were in Haldwani jail for a week and thanks to the efforts of some of the politically-connected people, we were released. Today I am very happy to be talking of water in the same hall.

I returned to Ufrenkhal after my studies. At that time, the forest in the village was very poor. My own mother would go to the forest of another village to get firewood. Some 14-15 villages got wood from that large forest. The villagers were treated badly by the villagers to whom the forest belonged. Often their head-loads would be confiscated. I felt very bad. There were Mahila Mangal dals in the villages then.  I spoke with them. I told them that if the village has some wasteland, that can be used to plant trees. This will rejuvenate the forest. If a forest is reborn, so will be reborn the peoples self-esteem. Everyone was enthusiastic and agreed to create a forest.

There is a place called Dudhatoli, where the forests were being cut by the government. We protested against it. At that time GC Pant was secretary of forests in UP.  He instructed the Divisional Forest Officer, a Mr. D.S. Tola to investigate the events in Ufrenkhal After roaming in the forests with DS Tola for 3 days, it was decided that the forest should not be cut.

When the forest got saved, people believed that we can achieve something and allowed me to work in the forest. I established mahila mangal dals in various villages and also nurseries. I instructed students to collect acorns and bring them to the nurseries. We made a nursery of 6 lakh plants, mostly oak. We decided to plant 2 lakh, but did not know what to do with the rest. We went to the District Magistrate (DM) and told him that we will gift 2 lakh saplings to the PM. He said that he would instead buy them from the village.

The DM Mr. Krishnan with the District Forest Officer (DFO) Shailesh Chaudhari came to see the forest. He saw thousands of trees alive. He bought 3 lakh trees from them at 8 annas each. This gave a fillip to the work. There was not need of external funding. We sold plants the next year too but then we decided to plant all the trees that we grow. Every year, we carried out plantation in 4-5 villages. 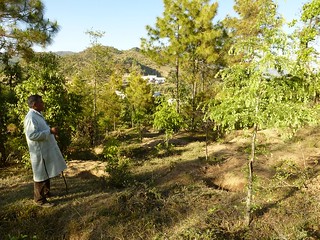 As the forests increased, the village women found it easier to collect fuelwood and fodder. In 1987, there was a major drought- the 100 year drought. This drought dried up the trees we had planted. It was a matter of concern that our estimate that there is a rainfall every 40-50 days was changed. There was no rain for 3-4 months. Thinking this, we dug small trenches upstream of every plant. We thought that these pits will save the water for 25-30 days and the plant's innate strength will let it survive for another month. Thus water conservation started with the idea of saving plants.

There was a major function on water conservation at the Gandhi Peace Foundation. I told them that we created 5000 ponds. People were surprised. When the lecture ended, someone asked me, how big are these ponds. I told them smaller than this table. People said they are not ponds. I said no, they are pits, but they conserve water. Anupam Mishra was the leading authority on water, he advised me to examine water conservation traditions throughout the country. After travelling for 2-3 years, I realised that the work of water is essential to life. And from that time I began working on water in earnest.

The slopes in Ufrenkhal are steep, but where ever there was space, we dug small pits. Downstream of these pits we planted some grass that grows well and does not allow the soil to wash away. In addition, people could harvest this grass for fodder. We planted broad leaved trees, apricots, oak and others. In the 90s there was another drought. There is the border of two villages which is in a ravine. This dried up immediately after the monsoon- the sukha raula. This started flowing throughout the year. On 26th January, we named this stream after the village whose efforts gave it birth. The steam was called Gad Ganga after the village.

A team of eminent people, including the people from the World Bank visited Ufrenkhal. This was a 3 day program, and not less than 3000 people attended each day's meeting. There were festivities, singing, and the villages welcomed the people. The guests interviewed several villagers. Many women said that Bharti-ji works on creating water and creating forests. We have several problems- no school, no vaccinations, dangers while gathering fodder. Only forest and water is not our problem. The visitors relayed this to Sacchidanand Bharti and then told him  'There is no shortage of funds', 'so create a major plan for the area and we will fund it'. I refused as I thought that if a flood of money comes in, then our work will be washed away. The World Bank official sent a reply saying that after meeting you, I realised the India is the land of Gautam Buddha and of Gandhi.

Slowly, an increasing number of people started visiting Ufrenkhal- both individuals and organisations. CHEA itself has sent more than 400 people. Using this they started work in Lamgarah which I had the privilege of visiting last June.

This is simple work . We always say that rivers are our mothers. Well, springs are the mothers of rivers, and forests are the mothers of springs. If we treat our mothers with respect, they will bless us, give us their gifts. If we do not, they will refuse to give us what we needyou know that 2 years ago, there was a drought and the Kosi refused to give Almora water. Of 3 pumps only one worked, and the irrigation canals were banned. The next year, the Kosi flooded and washed away the roads. We think of these as calamities and ask for crisis funds. But rain was always a blessing for us.

If Uttarakhand is the Devbhoomi, it is not for the temples, but for its heavenly rivers which form the warp and weft of life throughout the country. If the springs dry, the river will too. Like the Saraswati, our rivers too will only live in memory and mantra.
We started this work in a very small village. Now people from other states such as Sikkim, Himachal Pradesh and Jammu & Kashmir come to see the work and learn from it. Various universities also visit.

I tell students today to visit places - enjoy the travelling, enjoy being with friends, but then come back with new ideas to serve your village. We should be able to say that we have created a project for our village, we do not need the project that has come in from Delhi. There are more than 12,000 watersheds in Uttarakhand. Each one should have a project created in the village.

We need a clear forest  policy and a clear water policy. Today pine forests are prevalent and they cause forest fires. However, our villagers also protect the forest from fires. This small effort has solved the water problems of 140 villages in the area.

I thank you for your love and generosity and invite you to Ufrenkhal.

There is a new focus on hand pumps in villages. What is your opinion on this? What is happening to traditional water management systems?
Hand pumps are groundwater. It is like a pot of water. If you keep on withdrawing and not putting anything in, it will dry up. We have a study, all pumps are drying by 5% some by 20%. The foundation of water security is to ensure enough recharge. But the reaction is to drill deeper wells. Due to this, groundwater is rapidly decreasing. The solution is to revive traditional wisdom, which still remains in this country.