A village creates magic…and a river!

Ufrenkhal – the village
Driving towards Ufrenkhal, a village in Pauri Garhwal (Uttarakhand), I see a lush, green mountain covered with deodar, banj and utees trees. Little did I realize that this diverse and dense forest, which is alive with wildlife, is very new. 40 years ago, this vast area was a firing range!

My curiosity was aroused. I wanted to find out more about this transformation. When and how did it happen? What was done? And most importantly, who was behind it?

Sacchidanand Bharti – the teacher
It wasn’t long before my questions were answered. I was introduced to ‘the man’ himself - Sacchidanand Bharti or Guruji, as he is affectionately known. A teacher for over 30 years, his commitment to the village that he has lived in since birth as well as to his work, have made him famous nation-wide. Even though he has received prestigious awards for various achievements, the one that he treasures the most isn’t an award in the typical sense of the word. It is the creation of the forest of Ufrenkhal and the new born singing river – both inspirations to the nation today. 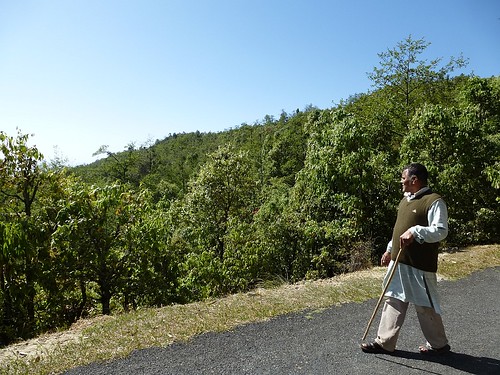 Like most, he too has his gurus. He credits two people for spurring him on – Chandi Prasad Bhatt, who taught him about forests and Anupam Mishra, who taught him about water. The forest and the river that have replaced a formerly barren and tree-less firing range- and beyond are testimonies not only to his work but also that of his gurus.

He takes me back to a time when the ‘revolution’ was just starting – the revolution to rejuvenate the forests in Pauri Gadhwal and alleviate the extreme drought situation that existed at the time. 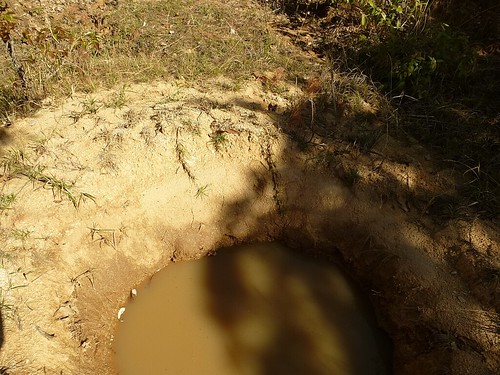 The plan was simple. The villagers dug small percolation pits on every bit of available land on the slopes that surrounded a drain line. The pits prevented water and soil erosion and also increased percolation. This infiltrated the soil and recharged the groundwater, and ultimately the river. This was called the chal-khal system.

Grass was planted immediately downhill of the pits to secure the edge and prevent the soil from being washed away.  Trees that were planted around the pits were nourished by the water that was retained there. Once grown, they helped in retaining soil and water. The pits and the trees developed a mutually beneficial relationship, which rejuvenated an entire system.

More than 40 villages have adopted and 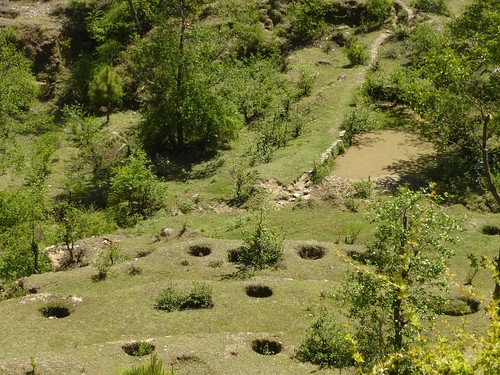 immensely benefitted from the techniques honed by the people of Ufrenkhal. Block Development Council member of Ukhlyu Panchayat Jagat Singh, attested that he has been utilizing Panchayat funds to dig these pits since 1992. Springs were born that year itself and continue to flow to this day. Earlier, this work was carried out by the villagers through shramadaan drives. Today, it is done in the monsoons, for wages of Rs. 50/- per pit. This is an on-going process, having continued for over 30 years now.

This is similar in concept to the system of building contour trenches, which is widely practised in watershed development but there are some crucial differences. Contour trenches are rectangular pits about 0.30m deep and 0.30 m wide, with the length and spacing varying as per the slope. These are used to increase the infiltration of water into the soil and increase ground water levels and stream flows in a watershed.   First, these pits are deeper than the contour trenches with average dimensions of 1.25m diameter, and 1.25m depth. This enables the pits to act as small storage structures, which then allow the water to gradually seep into the subsoil.  Second, instead of the usual rectangular trenches, the pits are circular. This greatly adds to their stability and allows the work to be carried out on steeper slopes than are recommended for contour trenches. The size and shape of the pits are instrumental to the success of this effort and can be replicated to address similar situations.

Building awareness - the challenge
This effort hasn’t been free of challenges even though the concept was technically simple. Implementation isn’t that difficult but getting the support of the villagers to sustain this effort, is hard. Similar programmes have been initiated throughout the country but very few have been enthusiastically adopted by the villagers and an even smaller percentage has managed to sustain and expand beyond the initial surge of enthusiasm.

35 years and counting, this people-led movement continues to spread throughout the Central Himalayas by word of mouth. The reason it has succeeded is simple. Education. No, not schools and related education but education of the people. Creating awareness among them and making them understand the benefits.

“Once people know how it has benefited their neighbours, they all want to benefit likewise”, said Jagat Singh. Bharti went on to say that it wasn’t as difficult as it might seem today. The fact that he was one of the villagers and not an outsider coercing or instructing them to do certain things helped greatly. “They have known me all throughout my life, and I have been very careful to not do anything, no matter how minor, that will cause them to point a finger at me. Also, they knew I had nothing to gain. I was not getting paid for this. This made it easier for them to trust me and to believe that I only had their interests at heart”, he said. 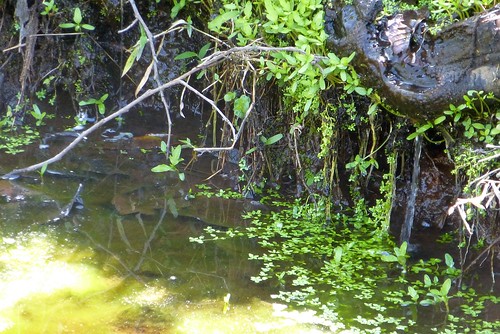 The once-dry ravine is dry no more. Now, while walking along the boundary between Dandkhil and Gad Kharak villages, one's ears continually hear the musical chattering of a stream. This is the Gad Ganga, created by the villagers for the villagers. It is a perennial river with a discharge of 3 litres per minute near its source. This is one-fourth the flow rate of a tap when opened to its full extent. It seems small, but the river continues to build up as it flows down the slopes. The stream is used for irrigation by means of a canal, and also for drinking water in times of drought. The many springs that have been born as a result of this effort to prevent soil erosion and rainwater run-off are yet to be counted.

A miracle in action, that’s what this is. In an area where the recurring narrative is that of dying springs and lost rivers, this effort has shown that miracles are indeed possible. It has also given hope to scores of people and groups from across the country that this success can be replicated anywhere. All it needs is effort, hope and belief.

An experiment for the future

Discussing an equally serious problem caused by global warming, Bharti told me his simple yet audacious plan to curb the glacier retreat. He proposes a modified version of the same chal-khal system that has brought about such miracles in Ufrenkhal. His plan is to dig percolation pits along the Himalayan meadows close to the end of the glacier around May. The pits will retain water until they naturally freeze over during colder weather. Just as a single crystal induces crystallization, these frozen patches will ultimately lead to larger frozen areas.

Bharti hopes that the Government would give him leave to implement the modified chal-khal system with a small group of people near a glacier. This method might or might not work but it will have minimal negative impact on the fragile ecosystem of the area.