Manu Moudgil
22 Jul, 2016 . 7 mins read
How paddy grew in popularity in Punjab and continues to steal the show, thanks to lack of alternatives for farmers.

Whatever be the water situation, it doesn’t look like paddy’s popularity as a crop is going to diminish anytime soon. Source: Akshay Mahajan/Flickr

Take the roads of Punjab during the monsoon and you will find most fields turned into pools of water. It’s mainly the water pulled out from the underground vault to support the kharif crop of paddy. Neither a native plant nor suited to the agro-climatic region, paddy has pushed out maize and cotton, which were common in the pre-green revolution era. From 2,27,000 hectares in 1960, the area under paddy rose to 26,12000 hectares by the year 2000. A growth rate of 1,050 percent!

Last year, Punjab contributed 93.5 lakh tonnes of rice to the central pool, which was around 30 percent of the total stock. This, however, required 48,105 million cubic metres of water. In fact, estimates by the Commission for Agricultural Costs and Prices suggest that to grow one kilogram of rice, 5337 litres of water is required, which is double the figure for West Bengal (2605 litres), a natural habitat for the crop.

The conventional method of rice cultivation requires flood irrigation (730 mm per hectare) as it helps check the growth of weeds. This is why paddy was traditionally grown mostly on floodplains of rivers and around drains in Punjab. Expansion of irrigation canals and accessibility to groundwater through pumpsets meant more area could be brought under this crop. Allowance of free power to operate these pumpsets furthered the cause even though it came at the cost of receding groundwater table. As many as 81 percent blocks in the state are either overexploited or critical.

At present, the state has around 14 lakh tubewell power connections. In 1970, there were only 1.92 lakh tubewells.

In 2009, Punjab passed the Punjab Preservation of Sub-Soil Water Act fixing the date for transplantation of paddy as June 10. Punjab government often extends the date by five days. This is done to take maximum benefit of monsoon rains for irrigation and to reduce pressure on the groundwater table. It has been found that the plantation done post June 10 reduces groundwater consumption by over eight percent while further shifting of plantation date by 10 days can reduce the consumption by more than 26 percent.

“The transplantation date can also be fixed region or block wise depending on the groundwater situation there. Reducing the power supply to tubewells after one month of transplantation may also force the farmers keep the fields moist instead of flooded all the time,” says Dr H. S. Shergill of the Institute of Development and Communication. 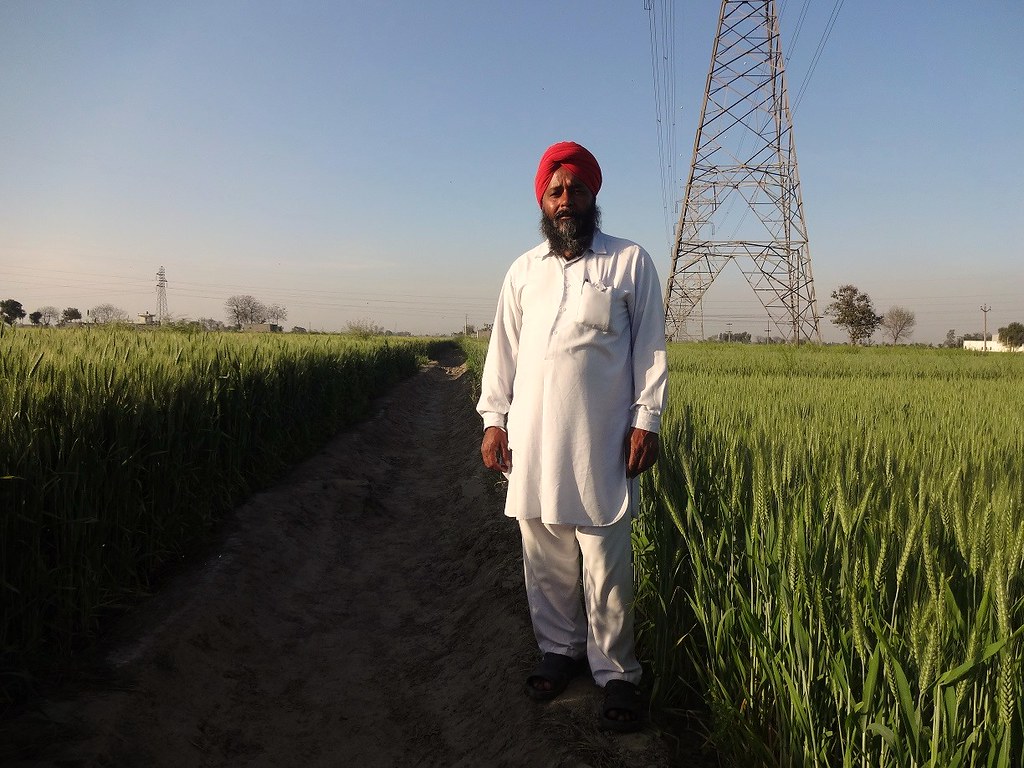 (DSR), which involves sowing the seeds instead of transplanting saplings. Baldev Singh of Talwandi Bhangeria village in central Punjab district of Moga practises DSR on 20 acre, saving on labour and fuel used to power pumpsets when power supply is erratic. “I have got a machine that drills the seeds in the soil. The only issue with DSR is that you have to take extra care for one and a half months as weeds may flourish due to less water. I get around a quintal more rice per acre than other farmers,” he says.

But DSR does not work everywhere. “It needs good loamy soil. Also, farmers are wary of this technique as they are more in groove with the conventional practice. Infestation of weeds requiring regular monitoring is another reason that DSR got restricted to few pockets,” says Dr P. S. Rangi,  consultant with the Punjab Farmers’ Commission.

Same was the experience of Palwinder Singh who tried DSR on his fields at Suhari village in Gurdaspur district of northern Punjab. “I found the crop to be weak as the roots did not go very deep. It mainly works with heavy soil,” he says. Palwinder now practises system of rice (or root) intensification (SRI), which has many takers across the world.

The system of roots

SRI involves plantation of saplings 10-12 days old instead of three weeks in a grid pattern with space of eight inch on all sides. The idea is to get better nourishment for the roots which can support a strong plant. The soil moisture is maintained through irrigation every four to five days instead of keeping the fields flooded all the time.

“The weeds are removed every 10 days in the first month. The yield we get is three quintals per acre--more than normal despite having lesser saplings due to wide spacing,” says Palwinder Singh. Farmers in Bihar have set world records using SRI but Punjab is yet to make a significant headway. One issue is related to labour as more care is needed for transplantation of younger, thinner saplings. “It takes more time. We would spend Rs 3500 on labour per acre as compared to Rs 2000 per acre in conventional transplantation method, but we save on water, fertilisers and pesticides which are not required with SRI,” Palwinder says. 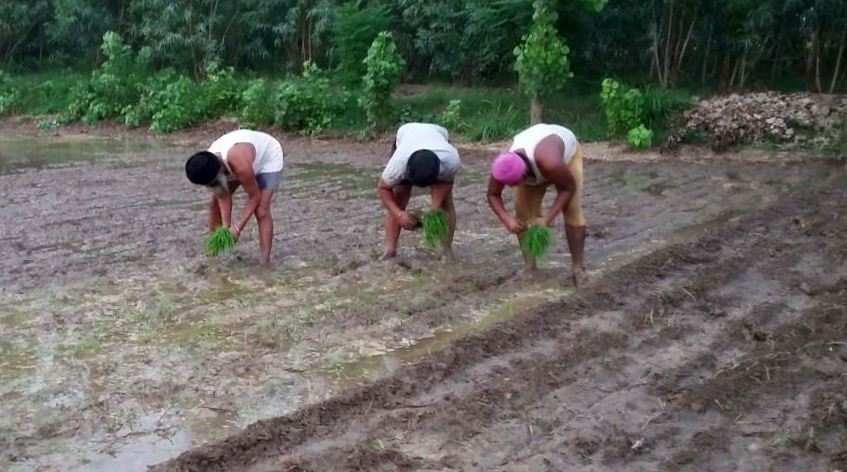 Rajesh Saini, who has also tried SRI, feels the need for a machine which can help with plantation. “Farmers in Punjab love machines not only because it saves time but also due to shortage of labour here. Preparation of organic manure, which is essential to get good results in SRI, also demands more effort,” he says.

May be that’s why SRI is mostly taken up on small farm lands. “Only small farmers can spend that much time on SRI. On big farms, everything is done quickly with machines. They don't have the patience for planting and caring for such small saplings,” Palwinder says. Small farmers make up only around 34 percent of the total farmers in Punjab.

Whatever be the water situation, it doesn’t look like paddy’s popularity as a crop is going to diminish anytime soon. There is economics to back it.

The economics of it

If better water availability pushed paddy, assured procurement made it stay. The green revolution, introduced in India in 1960s, came with high-yielding varieties of wheat and paddy meant to make the country self-sustaining in food production. Assured procurement of these two crops by government agencies for distribution to other states fetched better prices for farmers. Over time, paddy dovetailed well with wheat, a major winter crop of Punjab. Consequently, machinery was also specifically designed for wheat-paddy cycle, which further pushed the combination.

“Today, Punjab’s farmers have specialised in paddy cultivation which makes it difficult for them to shift. And why should they, when it’s fetching a good price?” asks Dr H. S. Shergill of the Institute of Development and Communication. Dr Shergill has done a study on paddy cultivation in the state claiming that there is no suitable alternative to paddy in the kharif season. In 2010-11, net return per hectare from paddy was Rs 19,826 while Bt Cotton fetched Rs 16,700 and sugarcane gave Rs 13,331. Maize was the worst at Rs 7136 per hectare. “Paddy also has the lowest yield instability among all these crops. Why would farmers move away from paddy and reduce their income? In fact, more area is bound to shift from cotton and maize to paddy,” Dr Shergill says.

"Punjab’s farmers have specialised in paddy cultivation which makes it difficult for them to shift. And why should they, when it’s fetching a good price? Paddy also has the lowest yield instability among all these crops."

His prediction is based on the fact that southern Punjab, known for cotton production, is increasingly facing problem of water logging, which is more suitable for paddy. In addition, the massive assault of whitefly insect on cotton last year has made farmers wary. This year, the area under cotton reduced by 40 percent from last year. “Labour shortage also sits well with paddy as its harvesting is completely mechanised. That too, at a low cost because the same machine is used to harvest the wheat crop as well,” says Dr Shergill.

Dr P. S. Rangi,  consultant with the Punjab Farmers’ Commission pinpoints the vicious circle. “Even if farmers go for crops like maize, they are not going to get the right price. Around 85 percent of the maize is sold below the minimum support price because there’s no procurement agency. Farmers also want to save water because they are spending money to deepen the borewells every three years, but what’s the alternative to paddy?” he asks. Various attempts of the state government to make farmers diversify from wheat-paddy cycle have failed, mainly due to lack of marketing for other crops.

Basmati rice, which emerged as a good alternative, has also lost steam. The long, aromatic variety requires less water, can be sown late and usually fetches high returns through export. But international demand has crashed while sowing area has increased resulting in huge carryover stocks. The area under Basmati last year dropped by 13 percent over 2014-15.

Dr Shergill believes that instead of blaming paddy for groundwater depletion, state government should stop supplying free power for pumpsets. “Free power means farmers don’t monitor the quantity of water going in each plot. Also, they tend to plant paddy even in sandy soils which require much more water than loamy soil,” he says.

However, the fact that Punjab government released 1.5 lakh more tubewell connections recently shows that paddy will gain more ground, thanks to political compulsions.