The past is not a foreign country...we still do the same things for water here

Amrtha Kasturi Rangan
26 Oct, 2014 . 4 mins read
Communities in semi-arid, desert-like Kutch, Gujarat, have managed to create their own water security plans with a little help from local organisations. Even the State is taking notice now!

Raujibhai came to Dholavira with the excavation team of the Archeological Society of India when he was 19 years old. 25 years later, he's still there as a guide and like all guides, he brings to life the day to day lives of the people who lived here 4000 years ago through his couplets and his dramatisation.

“Dholavira, is one of the 5 largest sites from the Indus Valley Civilization. It is now the most prominent site found in India and was once considered the grandest city of its time”, explains Raujibhai.

What stands out in Dholavira, is the attention to detail when it came to collecting and storing water. More than 16 reservoirs are said to exist on this 100 hectare site, of which 5 have been excavated. While these reservoirs harvested rainwater, an elaborate system of drainage channels was planned to ensure that all the runoff collected in these tanks. “See this reservoir,” Raujibhai says, “it has a well inside it so that even if the tank dries up, the well will supply water”. There is also a standalone well and a seasonal stream, which was dammed at multiple points to harvest water.

Their water mantra was simple: collect and store water locally and conserve it to provide fresh water. This continues to be relevant even today for the 1.7 lakh people who live in Rapar, the taluka adjacent to where Dholavira is located.

This has been proven by Samerth, an organisation that has worked with communities in 20 Gram Panchayats in Rapar to create structures that can store 64 million cubic feet of water. What are the elements that are common? How is Rapar's water security now?

Gazalaben, who started Samerth, begins by talking about the earthquakes in Kutch, with the one in 2001 causing extreme destruction and loss. “This is when Samerth began working in the region,” she says. As a part of the relief work, Samerth identified appropriate designs and constructed houses and wells in some of the hamlets. “The well was incidental, added because water availability was an issue and people didn’t have their own sources of water here”, she says.

A visit to a family that re-constructed its house and a well as a part of the relief work, 13 years later, finds the home abuzz with activity with about a dozen children of all ages. The elder of the house recounts how he used to migrate in search of labour when there was no water for agriculture. 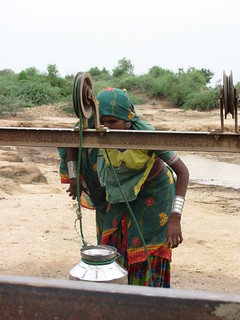 “Now, none of us migrate”, says his son. The well allows us to grow livestock and irrigate our crops”, the elder says. They even make and sell enough ghee to sustain their families. “If not for the earthquake, we would not have got the well, we would not be together now, instead all my children would have migrated in search of livelihood”, he says. “The well cost around Rs. 12000 –13000” says Gazalaben, “see the transformation in their lives,” she beams.

Communities from 20 Gram Panchayats now work on creating water security for themselves with support from Samerth. People from the community and some of Samerth’s staff have been trained in understanding the science of rocks and water. They now know where water structures like talaabs, wells and check dams should be sited. “The training done through Arid Communities and Technologies (ACT), an organisation that specialises in hydrogeology, has revolutionised the way our communities plan and manage water”, says Ashishbhai, a core member of the Samerth Team.

Based on this understanding, they create water security plans, which are submitted 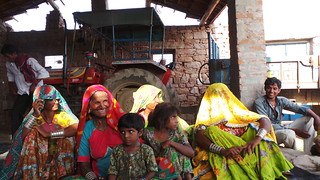 in the Gram Sabha. “The biggest difference is that traditionally vulnerable communities like the Kolis that never participated in Gram Sabhas earlier now come to there with their own plans for water security”, says Gazalaben.

The Gram Sabha endorses these plans and leverages multiple schemes to implement them. “Around Rs. 2 crore has been leveraged giving employment to more than 15000 people”, says Ashisbhai, the pride on his face palpable. “While earlier the Kolis used to migrate to work in extremely harsh conditions in salt pans or coal making; they now are able to stay back in their villages because of assured water availability”, chips in Gazalaben.

The effect of this work has become evident to the State. The Deputy Taluka Development Officer and the Taluka Development Officer promise to do whatever it takes to help widen the reach of this effort. The MLA of Rapar holds up a copy of the water security plan for Bela, a village in Rapar and says “this data driven, local water security planning is the need of the hour“. “Promote local, traditional water sources in your village,” he exhorts the crowd of around 200 odd people gathered to understand more about the work in the 20 GPs. “The state will put whatever money it takes to get it operationalised”, he promises.

Better days may indeed be around the corner for Rapar Taluka!