Maharashtra's plan to seed clouds may sprout nothing

History tells of various methods by which people called upon the rains -- music, dance and religious rituals. The government of Maharashtra, however, plans to try out cloud seeding. The state government has already given an in-principle nod to a proposal to set aside Rs 10 crore for the project which will begin in August if the current monsoon deficit continues.

Cloud seeding is done by spraying tiny particles of silver iodide or dry ice onto a cloud from an aircraft. These particles attract the water drops that are already present in the cloud and form bigger drops, which fall as rain. However, this isn't as simple as it sounds which is why evidence about the efficacy of this technology is still inconclusive.

When were clouds first seeded?

American meteorologist Vincent Schaefer stumbled upon it in 1946 while tinkering with a deep freeze and dry ice. The United States invested heavily in this technology until the mid 1990s and even claimed to have extended the monsoon season during the Vietnam war to gain an upper hand. Soon enough, other countries caught up with the US and today, China is believed to be using this technology most extensively. It even claims to have checked rainfall incidents during the 2008 Beijing Olympics by making clouds rain beforehand. However, all these assertions remain unsubstantiated.

In India, the Tata company first experimented with rainmaking over the Western Ghats as early as 1951. Two years later, the Committee on the Atmospheric Research of the Council for Scientific and Industrial Research (CSIR) recommended setting up a Rain and Cloud Physics Research (RCPR) Unit which later became a part of the Indian Institute of Tropical Meteorology. Since 1957, RCPR has conducted several experiments over different regions of the country where some areas have shown an increase in rainfall in by 20 to 24 percent.

Other states have tried their hand at this too. The Centre for Earth, Atmosphere & Weather Modification Technologies at Jawaharlal Nehru Technological University, Hyderabad, tried cloud-seeding in 12 districts and claims that increased rainfall helped save crops. Karnataka also tried it in 2003 resulting in rain 100 km away. Today, many indigenous and multinational companies see a big market for cloud seeding in India thanks to the growing water scarcity, overdependence on the monsoon and increasing erratic weather conditions.

While it is now accepted that clou 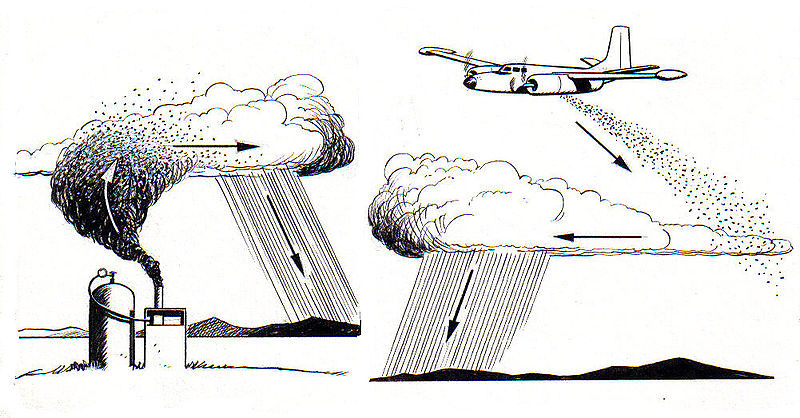 d seeding does lead to rain, it's efficiency vis-a-vis cost is debatable. In an interview with the Economic Times last year, chief project scientist at IITM Thara Prabhakaran said that cloud seeding has not proven to be an effective tool and needs further research. In 2003, the US National Research Council had come up with a similar argument: "Although human activities can clearly affect weather, there is still no convincing scientific proof of the efficacy of intentional weather-modification efforts", it said.

The sentiment is shared by Anand Sharma, Director of the Meteorological Centre, Dehradun. “Many countries have experimented with cloud seeding and many have abandoned it. The rainfall can’t be quantified to have occurred due to cloud seeding and not due to normal weather occurrences. Also, the method is too costly to be tried on a large scale", he says.

An analysis of over 50 years of data on cloud seeding in Israel showed that changing weather patterns and not cloud seeding led to increased rainfall. Last year, US researchers worked to put all doubts to rest but the results remained as inconclusive as ever.

Parineeta Dandekar, of South Asia Network on Dams, River and People (SANDRP), feels that the announcement to seed clouds is just a gimmick by the state government to keep people in good spirits. “Maharashtra has been experiencing drought every other year since 2012. After a few good days last month, the monsoon has again weakened putting at risk the standing crops in rainfed areas. The promise of artificial rain gives people hope in such desperate times", she says.

“The socio-political scenario in the state favours water-intensive sugarcane as several politicians have a stake in the sugar mills. Grown on 9.4 percent of gross cultivated area, sugarcane takes over 71 percent of the irrigated water", says Dandekar. In contrast, pulses occupy a mere 16.8 percent of the gross cropped area but get only 3.4 percent of the irrigation water. If 50 percent of the water being used to cultivate sugarcane in the Marathwada region was diverted towards pulses, it would have provided livelihood security to over 21 lakh farmers as against 1.1 lakh sugarcane farmers who are being supported now. Besides the crop, sugarcane factories also use lot of water. A minimum of 1500 litres of water is required to crush one tonne of cane.

Maharashtra first experimented with artificial rain by “manufacturing showers” in drought-affected areas at a cost of Rs 5.5 crore in 2003. Since January 2014 more than 400 farmers have committed suicide in the Marathwada region, which is experiencing over 40 percent rainfall deficit this monsoon season.

Embezzlement of funds meant to expand irrigation networks is also costing the state heavily. With over 1800 projects, Maharashtra has the largest concentration of irrigation projects in India but the 2012 Economic Survey showed that the state's irrigation potential rose by only 0.1 percent in the previous decade despite investments of Rs 35,000 crore. In fact, 71 per cent of irrigated land in the state is not irrigated by large dams or canals, but by borewells which are also frequently drying up.

Cloud seeding is a quick solution that doesn't pay. It is curious why a government that invests in long term solutions such as the Maharashtra Groundwater (Development and Management) Act 2009, which aims to control overexploitation of groundwater resources, focus on source & resource management as well as engage community participation, would invest money in this.