Drought and the desert: They don't go hand in hand here

Beris serve both people and their livestock.

Women in bright, colourful clothes carrying pots on their heads -- this is how popular media often depicts the women of rural Rajasthan. This is what I expected to see in the Bakhasar region of Barmer district, which borders the famous salt desert, the Rann of Kutch. The groundwater is often saline and rainfall does not exceed 250 mm. Last year the monsoon was erratic yielding even lesser water. Water sources were not replenished and hence dried up faster.

So why isn't the lead image of this piece one of women walking miles to get water? Because that's not what I saw. 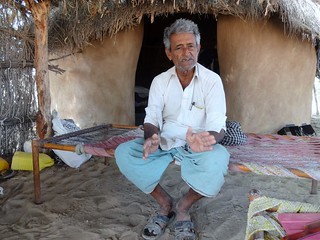 “Women of our village used to walk 4 km to fetch water from neighbouring Giddah village. People would also migrate to areas near the canal or the Looni river with their livestock when water sources dried up. Many migrated to Gujarat in search of greener pastures as well. But that was five years ago”.

Today, the village has around 10 ‘beris’ which yield water all year round thanks to which the residents have even increased their livestock head three times.

“We have also graduated from goats which typically use less water and fodder to more resource-demanding sheep and cows. There is a shortage of fodder only when the monsoon fails for two continuous years”, he adds. This has been made possible thanks to the collaboration between traditional knowledge and modern resources.

Western Rajasthan is punctuated by ponds, many of which are architectural geniuses managed with religious reverence. Unlike other parts of the country, wells are not the preferred water source in the desert. It isn't difficult to understand why. The groundwater is not only often brackish but also digging into the sand is an arduous task; the loose soil can cave in any time. However, in a drought year like the current one, ponds do not sustain for long. The fact that thousands of villages not only survived but thrived with various cultural and social nuances indicates that people had to work with nature to tap fresh water from wherever possible.

'Beris' is the name given to this collaborative effort and they bear sweet water.

Colloquially called ‘rejwani’, this water is the local precipitation trapped in layers of soil much above the deeper, brackish aquifers that wells usually touch. Even in years of scanty rainfall, this reserve gets replenished and remains safe from the intense heat. A ‘beri’ can be mistaken for a well from the outside but it does not fetch water from an aquifer but from the ‘rejwani’ water trapped much above.

In Jaisalmer, a layer of bentonite running 20 to 50 feet beneath the surface holds ‘rejwani’ water while in neighbouring Barmer district, it’s a mix of sand, gravel and rock which does the same job. “Normally, it’s the good growth of vegetation, especially neem, khejri and rohira trees, which gives away the location best suited to get sweet water from”, informs Rajaram Ghedu, a resident of Geedah village working with the people on water harvesting methods.

However, as indicated earlier, it’s still not easy to access this water due to the loose soil. The ingenuity of man to humour nature comes to the fore again. From a net or rope of shrubs to specially carved stones, people used various ways to leash the unreliable soil.

From gypsum to cement

At Rangwali village, a beri going 60 feet deep fetches sweet water. This was built at a time when cement wasn't in use and locally-mined rocks were carved to fit into each other to reinforce the wall. As the expert digger made his way down, he would lift the soil out and reinforce the walls with gypsum, which was traditionally sourced from Sindh and western Punjab (both now in Pakistan). “Gypsum hardens within 12 hours. A 1 cm thick plaster would be used on the walls”, informs Rajaram.

On finding water, the digger would start reinforcing the walls again with stones carved to fit into each other. Each stone not only supports the stones around it but also gets a backing in reciprocation. Even if one rock falls, the wall will stay due to this group work.

Such stone-walled beris are very durable as man 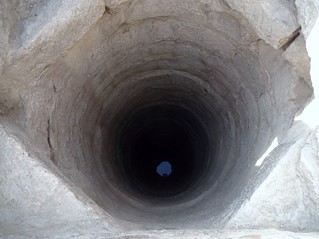 y of them are still functioning. With time, the expertise to make a stone-walled beri diminished. Low quality 'kutcha' structures took their place.

The lower walls of these beris, till the water level, would be reinforced with wooden planks and branches of trees besides a net of shrubs. “These beris were not known to last for long. They would cave in after a couple of years. Digging was a difficult job and required lot of effort and resources. This is why people preferred migration during drought years”, informs Karim Khan.

The arrival of cement changed things for the better as reinforcement became easier and safer. Now the ground is dug to a depth of 15 feet at once. Two concentric iron sheets, each three feet tall, are erected over the mouth of the dug portion and cement is poured into the space between them. As the cement dries up, the sheets are removed yielding a 3 feet round wall. This wall slides into the cavity when the soil is removed underneath. Every day, a specialist digger goes down the centre of the beri through a rope tied to his assistant’s waist outside and continues digging.

On the ground, other workers make new walls to sit on top of the previous one thus giving shape to a hollow tower of cement in the beri. The benefit of making these fragments is that the strength of the structure remains equally distributed. When the tower stops moving down due to some obstruction or weight of the structure, the skilled digger starts making another tower from the point of the obstacle. This time, the walls made are only 1 feet tall. 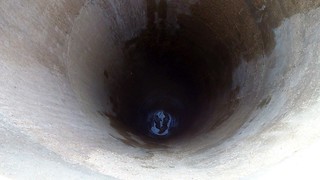 “In the summers, two walls can be made in a day but in winters only one is made as the cement does not dry up easily in low temperature. Many a times the tower gets misaligned due to sandy soil and it takes 5-10 days to bring it back in line,” informs Jamaluddin, the oldest expert on 'beris' in the area.

To increase the efficiency of the ‘beri’, 4-5 narrow plastic pipes each around 10 feet long are inserted into the lower walls. These pipes then ensure a good supply of water minus the sand.

This new technique may have reduced the risk of walls caving in, but the working conditions are still tough. The deeper the hole, the more the heat making it difficult to work inside. Diggers have to come out every half an hour. A small beri takes 10-15 days, but deeper ones may take up to 2-3 months.

A rare tragedy may occur due to human error. “A digger died in our area because he worked in haste. He was making another tower from the inside and instead of doing one foot every day, he did 3 feet. By the third day, the 10 feet new wall could not sustain the weight of 60-70 feet from above. Everything came crashing down. A JCB machine was used to get his body out”, remembers Rajaram.

Water holds supreme importance in Rajasthan, being a desert state and so do those who work with water. People, who can point out a good catchment area, study vegetation and groundwater or build a fine pond, bawdi (step well), hold privileged positions irrespective of their caste. Traditionally, they were not only honoured on the completion of the work but also presented with gifts on auspicious occasions throughout the year. The same was the case with those who worked on beris. However, with time, expertise declined mainly due to the risk and resources involved.

Though the arrival of new cement-based techniques reduced the risk, the lack of expertise had to be dealt with. “There was no expert in the 50 surrounding villages. My father learned the technique from an old man living in a far away village and I later learned it from him”, says Jamaludin.

With time, efforts of people like Rajaram to revive this traditional practice paid off. “People realised that tapping r 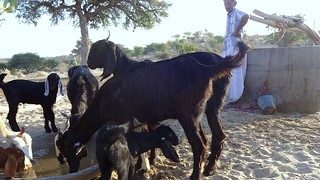 ejwani water through 'beris' is the long term solution to distress migration so they started pooling in money for community structures. Today, there are around eight men in the region trained to make these 'beris'”, Rajaram says. In all, a total of 289 'beris', of depths varying from 20-150 feet have been built. Each 'beri' supports 8-10 families and 150-250 livestock; a total of about 2900 families and 50,000 livestock.

Access to their own community assets and sources of drinking water has also brought about an increase in self-esteem of the villagers who don’t have to depend on government machinery or market sources for water. Post 2005, various panchayats also constructed around 300 'beris'. Since villagers had already acquired the essential know how, they showed a similar eagerness in government works thus ensuring accountability and transparency.

With more work, the appreciation for the expertise has also increased in monetary terms. “At my father’s time, though there was lot of respect in his work, the payment per wall was just Rs 10. Now, a skilled digger can make Rs 500-600 a wall. So, two walls fetch you Rs 1000 a day which is good money here”, Jamaludin says. From an area of scarcity, Bakhasar has become a hub of professionals and water surplus villages. “Migration during summer has reduced which has also led to more children joining school who earlier had to move with their families,” informs Rajaram.

These experts get regular requests to repair and make new 'beris' in far flung Kutch and Jaisalmer areas too. “Though the geographical difficulties are greater in these areas, our men are so well trained that they can negotiate with any obstacle,” says a beaming Jamaludin.