Seetha
29 Dec, 2012 . 7 mins read
A two day course on Managed Aquifer Recharge (MAR) was conducted as part of the Saph Pani project, funded by the European Commission, at the Anna University in Chennai between the 11th and 12th of December. The event saw the coming together of experts in the field from across the world – Saph Pani partners from Europe, Australia as well as those from within India. The two day event witnessed a series of interesting presentations and deliberations that ranged from sustainability of MAR structures to impact assessment and not to forget, the Indian experience.

The Saph Pani project aims to improve water resource and supply in water stressed areas in the country, with expert help from scholars in India and abroad.

The CSIRO (Australia) FAQ on Managed Aquifer Recharge defines MAR as “the process of adding a water source such as recycled water to aquifers under controlled conditions for withdrawal at a later date, or used as a barrier to prevent saltwater or other contaminants from entering the aquifer.” Water can be recharged by a number of methods including infiltration via basins or galleries or by the use of injection wells.

Managed Aquifer Recharge is the process of deliberately increasing the groundwater in a region by assisting improved recharge with the aim of using the water at a later stage, thereby touching upon the crucial issues of water availability and sustainability.

A detailed study of the region is necessary to understand the geomorphic as well as the geological setting of the area. The need to undertake MAR as an option should be thoroughly assessed before embarking upon the project. Water availability and aquifer suitability are major concerns that need to be addressed before taking up any MAR project.

The inaugural session gave a sneak peek into the themes and topics of relevance which were to be discussed over the next couple of days. Dr. Gesche Gruetzmacher from the Kompetenzzentrum Wasser Berlin, Germany, presented a detailed introduction to MAR giving an overview of the various MAR practices in vogue across the globe. The hydrogeological settings, the various design elements and source water characteristics of MAR successes in Berlin, Orange County (USA) and Salisbury, Australia were presented. All aspects from the need for such structures to feasibility and constraints were discussed briefly.

Dr. R. Sakthivadivel from the Centre for Water Resources, Anna University gave an excellent presentation on the artificial recharge practices – both historical and contemporary - followed in India.These structures which aid in groundwater recharge vary from place to place depending upon the need, geological and geographic settings. Some examples include the Zings in Ladakh, talaabs and nadis of Rajasthan, Cheruvus in the Deccan Plateau and the Surangams of Kerala.

He stressed on the fact that groundwater regulation is practically non-existent in India and this was one of the major reasons behind unequal exploitation of groundwater resources in the country. He also mentioned that principles of MAR should be integrated with watershed development activities and communities’ capacities should be built in a manner that will facilitate them to play a lead role in such undertakings. 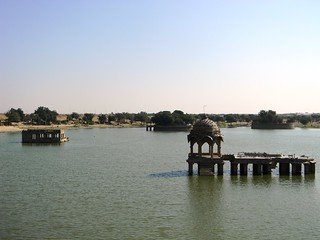 Gadisar Talaab, Jaisalmer, Rajasthan - Talaabs are one of the more commonly seen rainwater harvesting structures in India, catering to the irrigational and domestic needs of communities living in the vicinity

Dr. N. C. Ghosh from the National Institute of Hydrology, Roorkee gave an overview of the MAR practices in India including the details of some important programs implemented by the Government of India that involved MAR. V. C. Goyal from the NIH, Roorkee, outlined the steps involved in locating suitable sites for implementing artificial recharge.

Markus Strakl from the Centre for Environmental Management and Decision Support, Vienna, spoke about the potential of water harvesting structures for groundwater recharge in India from a social stand point. He presented his argument as a SWOT analysis and noted that one of the main weaknesses of MAR implementation in India lies in benefit sharing – benefits are not found to be equitable distributed among various members of the community. He noted that immense potential lay in the traditional water harvesting knowledge communities possess and when modern components are introduced, the results on the field would speak volumes for itself.

Professor L.Elango from the Geology Department, Anna University, Chennai, gave a detailed presentation about the mitigation of sea water intrusion with the help of MAR structures. He presented the findings of studies conducted in parts of the Arani- Korattalaiyar river basin located to the north of Chennai. Mr. Thirunavukkarasu from SPT Consultancy Services, Chennai, gave an overview about the role of temple tanks in aquifer recharge. As part of the Saph Pani project, some of Chennai’s temple tanks were selected to study the impact of infiltration and how it contributed to local groundwater recharge.

D. Gnanasundar and M. Senthilkumar from the Central Ground Water Board, South Eastern Coastal Region, asserted that a successful MAR implementation is capable of ensuring the sustainability of groundwater abstraction structures in hard rock areas.

Guidelines, risk assesment, use of reclaimed water and pre-treatment and post-treatment for MAR systems

Saroj K. Sharma from the UNESCO Institute for Water Education detailed the various pre and post treatment methods which are in use to satisfy the quality parameters of the water used for recharge. Water quality concerns, the need as well as the commonly used pre and post treatment methods for MAR systems were discussed in detail. Mr. Sharma pointed out the fact that it is best to incorporate pre-treatment options at the design stage and focus more on getting the pre treatment part right so as to reduce the dependence on post-treatment procedures.

Thomas Wintgens gave an overview of Managed Aquifer Recharge using reclaimed water. Wintgens took us through water reclamation schemes in place at various locations across the globe and described the end-uses that are relevant to specific areas in which the processes have been put in place. He explained how secondary wastewater from Tel-Aviv in Israel is used to recharge the aquifer using the soil aquifer treatment (SAT) - one of the methods used to remove pathogens from the source water by using soil as the treatment medium before it reaches the aquifer.

Peter Dillon from CSIRO, Australia went into the water quality guidelines for MAR implementation in India. He discussed about the suitability of Australian MAR Guidelines for Indian conditions and mentioned that findings suggested that adaptations need to be put in place for it to be of any use in the Indian context. Quantitative analyses pose a difficulty, given the dearth of information when it comes to monitoring and recording the various water quality parameters in cities and towns across India.

Quality of the water that is allowed to percolate is given high weightage in order to prevent aquifer pollution over time.

Declan Page from CSIRO, Australia spoke on MAR risk assessment and water quality considerations. He gave an interesting breakdown on how to determine the risks involved before deciding on going ahead with a project under consideration.

Hydraulics of infiltration ponds and integrated modelling  for impact assessment

Professor Michael Schneider from the Freie University in Berlin spoke about the hydraulics of infiltration ponds and the determination of relevant parameters. He discussed about the various types of recharge facilities – both surface and subsurface installations - and presented the various methods used to determine hydraulic conductivity and infiltration capacity. The course covered a gamut of topics relating to the implementation of MAR - presenting studies and researches both from India as well as abroad. The audience had to opportunity to listen to, learn from and discuss with the doyens in the field. 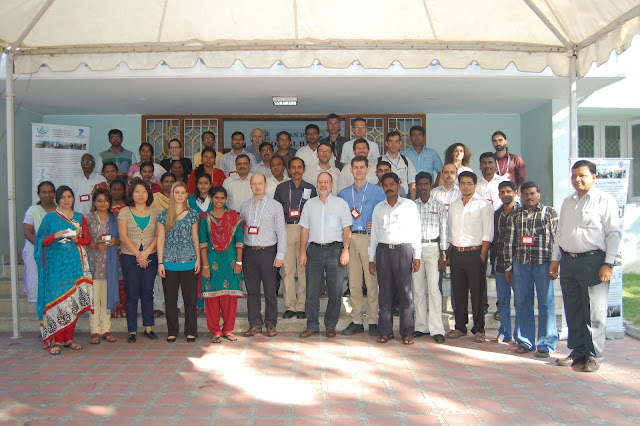 Overall, the two day course could be credited with being one of the best opportunities to get acquainted with the fundamental aspects - social, economic, hydrogeological and technical - of Managed Aquifer Recharge.