Divya N
20 Oct, 2014 . 3 min read
Basavaraj's house in drought-prone Chitradurga district in Karnataka is mostly self-sufficient for water. Was it serendipity, luck or something more?

Chitradurga district in southern Karnataka is infamous for drought. People here constantly suffer from water shortage and in the last few years, the problem has escalated due to poor rainfall.

"The continuous drilling of bore wells in and around Chitradurga doesn't help either", says Devaraja Reddy, a hydrogeologist based here. The situation has worsened with more and more people drilling bore wells because the groundwater has continued to deplete thereby resulting in the depletion of surface water as well.

"In 2013, Rs.1.5-2 crore was spent everyday to drill borewells but it was of no use since the success rate was only 2%", says Reddy. Failure in obtaining groundwater has led people to buy water from tankers. However, Chitradurga is greatly affected by flourosis with a TDS (Total Dissolved Solids) of 80%, which also means more scaling in pipes that ultimately leads to blockage in a few years.

Reddy strongly advocates rainwater harvesting and borewell recharge since these practices greatly decrease TDS while also keeping pH in check. It also leads to overall improvement in water quality and to prove his point, he asked me to visit what according to him was a model house in Chitradurga.

In Kanakanagar, a township in Chitradurga district, is Basavaraj's house. At first glance, it seems like any other independent two-storeyed house with a large garden but there is one big difference. It is self- sufficient with respect to water. When I entered the house, the floor of the circular living room felt cool under my feet. Basavaraj smiled knowingly when I mentioned this to him and asked me to follow him to one end of the living room. There, he opened a flap on the floor to reveal a water tank underneath! This 50,000 litre capacity water tank comfortably fulfills the water needs of his family of four.

The house was built in 2004, and along with the help of Devaraja Reddy, a rainwater harvesting and borewell recharge system was constructed. An initial investment of Rs. 50,000 has more than paid for itself. The water used in the house is a mixture of rainwater and water from the borewell. The rooftop rainwater passes through two filters (a sand bed filter and a membrane filter), which have been constructed on one side of the house in the garden. The garden also has a bore well that has a recharge pit that takes in the rainwater runoff as well as excess water from watering the garden.

The water that collects in the underground water tank is used for all domestic purposes - drinking, cooking, bathrooms, and garden. "The quantity of available water in our tank is more than enough for our family's needs. In the last 10 years, there has been no scaling in the pipes, or any defect of any kind in the whole system", says a very content Basavaraj. Reddy attributes this to the good quality of rainwater. 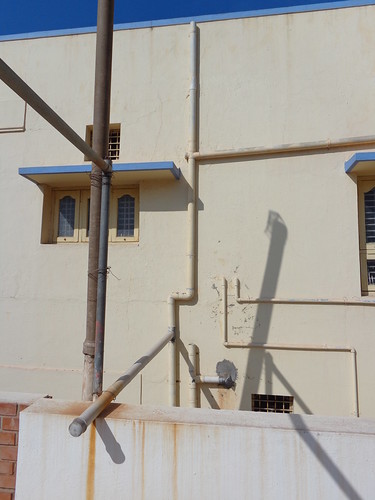 Basavaraj harvests not only the rainwater from his rooftop but also his neighbour's! "During the initial stages of construction, I approached my neighbour and asked him if he wanted the rainwater that fell on his roof, and he said no, so I started collecting the water from his rooftop via a pipe connecting our roofs". Basavaraj’s terrace measures 28 feet X 37 feet and the neighbouring terrace is approximately 30 feet X 40 feet. He says that he never has a water scarcity issue due to rainwater harvesting (from two rooftops) and borewell recharge.

Basavaraj gives all credit to his wife Sulochana who was instrumental in kick-starting the process. She is very passionate about water conservation and gardening and their lush garden completely is maintained by her.

Chitradurga's model house has proved that the oft-repeated principles of rainwater harvesting and borewell recharge can ease the water crisis faced by many. It remains to be seen if more people in the area will adopt these methods and benefit.