Hanumanthappa Ramanagar from Kushtagi taluka of Karnataka’s Koppal district has 15 acres of arid land with two deep wells on two sides of the land. One is a “very old” dug well and the other, a tubewell, is just 10 years old. Both were on the verge of going defunct two years ago. “There were many areas of land around us which were facing a similar fate.

The govt. has started reclaiming encroached lake beds in the IT city but unless citizens interact across class divides, these urban water bodies will continue to spew foam, says Leo F. Saldanha.
Manu Moudgil
Posted on 25 Oct, 2015 12:15 PM

Lakes spewing foam and catching fire in Bangalore made big news for several weeks but this is just an indication of the times to come as we fill up water bodies with effluents or turn them into sewage dumps in most cities across India. India Water Portal talks to Leo F. Saldanha of Bangalore-based Environment Support Group on how to manage these precious resources.

“Best practices in water management are too scattered, and results are not clearly visible. A model village would be ideal to spread awareness”, says Devaraja Reddy, a hydrogeologist in Chitradurga.
Divya N
Posted on 03 Dec, 2014 09:27 PM

Chitradurga district in Karnataka receives the lowest rainfall in the state. According to the Drought Monitoring Board, most borewells are dry and where there is water, its quality is poor. According to Chitradurga-based Devaraja Reddy who is a hydrogeologist,150-200 borewells were drilled in 2013, with an unfortunate success rate of 2%.

Basavaraj's house in drought-prone Chitradurga district in Karnataka is mostly self-sufficient for water. Was it serendipity, luck or something more?
Divya N
Posted on 20 Oct, 2014 12:46 PM

Chitradurga district in southern Karnataka is infamous for drought. People here constantly suffer from water shortage and in the last few years, the problem has escalated due to poor rainfall.

Manipal University has a comprehensive environment management programme but its water conservation efforts could be better. Involving students could give it the extra punch it needs.
Chicu Lokgariwar
Posted on 08 Dec, 2013 10:11 PM

Manipal University has a well-thought out, multi-pronged approach towards reducing its environmental footprint. This includes a comprehensive waste management policy and a programme to reduce energy consumption.

Excessive sand quarrying to meet the demands of the construction industry is destroying local irrigation systems in Anantapur. Which will prevail - agriculture or construction?
Amita Bhaduri
Posted on 17 Jun, 2013 05:29 PM

The construction industry went through a boom in the 1990s due to more people demanding and affording houses. This put a lot of pressure on the Pennar area in Andhra Pradesh. Sandmining, which is the process of taking sand, became rampant at that time.

Video: "80% of waste we generate everyday can be recycled": Interview with Vani Murthy, a Bangalore-based citizen activist

In a candid interview with Lakshmi, Vani Murthy speaks on solid waste management practices that we follow at home. About 4500 tons of garbage is produced daily in Bangalore, that ultimately reaches the landfill sites, contaminating soil, water and the environment.
Of the waste that we throw away daily, at least 80% is recyclable. Unfortunately, this hidden resource is lost as part of trash thrown away. Segregation at source will not only effectively reduce the burden on the overflowing landfills, but also help in pollution control.
sabitakaushal
Posted on 06 Feb, 2013 01:19 PM

Source of video: Chai with Lakshmi

Concerned by the growing health issues, Mallesh, an IT professional started Purna Organics in Bangalore. This start up organisation offers the following services: creating awareness about organic farming, helping interested individuals and families in setting gardens in their homes and also provide routine maintenance services. The video shows how families can practise high density micro organic farming in small tubs, with adequate watering and protection from pests.
Sumathi Sivam
Posted on 05 Feb, 2013 04:46 PM

Source of Video: Chai with Lakshmi

Precious Kaveri water down the drain; wasted to wash vehicles: Letter to the Chairman, Bangalore Water Supply and Sewerage Board

I tried sending a suggestion to Bangalore Water Supply and Sewerage Board (BWSSB) to tackle the urgent crisis in Karnataka this hot summer but didn't get any reply. Water crisis is a serious issue. When people do not have water to irrigate their lands, to drink for themselves, it pains me in the heart to see people wasting water profusely to wash their vehicles which goes down the drain. Manjunath M P presents the letter he sent to the Chairman, BWSSB.
Manjunath M P
Posted on 23 Apr, 2012 12:47 PM

Maps, lakes and citizens: The use of surveys in lake conservation - An article in the Seminar magazine

Settlements in the area that is now Bangalore have a recorded history that dates back to the 5th century CE. Water for these settlements was made available through multiple series of tanks, which numbered 19,800 around the year 1830.
Harini Nagendra
Posted on 19 Mar, 2012 11:44 AM

This lake system is now decaying with lakes either taken over for urban uses, or choking due to neglect. ATREE and the Bruhat Bengaluru Mahanagara Palike (BBMP) have been engaged in attempting to understand how to restore these lakes for urban use, while maintaining their ecological importance. This article in Seminar describes this attempt. 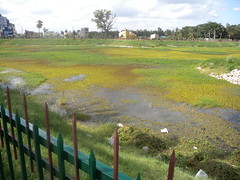