Water scarcity in the 'village of wells'

Abhiram Sahasrabudhe
Karishma Bhuyan
23 Mar, 2014 . 4 min read
What is the cause of water scarcity in Kattanbhavi, a village in Belgaum, Karnataka? Is it distance from source, lack of money or something beyond that?

What determines how we use water? Is it proximity to a source or could it be economic factors? A study in Kattanbhavi, a picturesque village in Belgaum, Karnataka, which also borders Maharashtra, gives clear insights into how and why available water sources are used in a particular manner.

Kattanbhavi (kattan-built up, bhavi-well), has an approximate population of 1350 (70%- Marathas and 30%- Naiks) and the most dominant economic activity is agriculture. The village, located atop a hillock, is surrounded by fields with red soil on the slopes and black soils on the flats. The annual rainfall is around 900 mm and the climate is dry during non-monsoon months. The key crops are rice, potato, jowar, groundnuts and vegetables and most of these are rainfed.

Of the 200+ households in Kattanbhavi, a sample of 51 households were surveyed to study the availability and usage of water. Kattanbhavi has been a water scarce area despite availbility of multiple sources of water. Water sources are available but water is not abundant since sources are far away. As noted in the map below, the village's water sources are three wells, a few borewells and a pond. 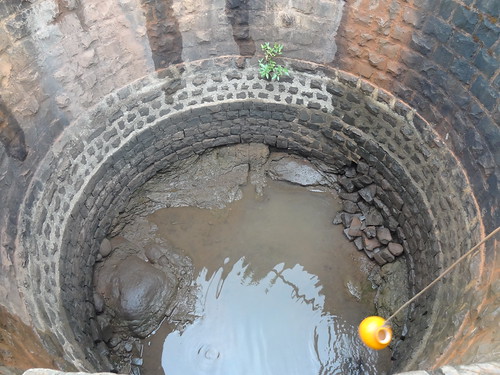 Earlier people used to climb down the well to collect water. However, this practice led to the water being contaminated. The women of the village lead by Bharati Bhandurge, a social worker, banned this practiced by imposing a fine on people who still continued the practice.

Apart from this drinking well, a perennial spring is also used for drinking purposes by a few families. The spring joins the nearby lake , which is used for washing clothes. One of the issues highlighted by the farmers was that during the summer months the water level in the well sinks very low, due to which people have to wait for hours to collect water until the well recharges. 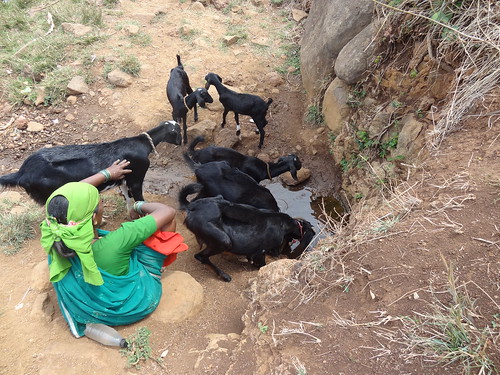 There are two other wells in the village, a well dug near the drinking water well (a dug well), which is unusable since water was not found at all. In 2000, this well was built with the help of funds raised by Jan Jagran, a local organisation. Another well, called Khalchi vihir (खालचीविहीर) (lower well) is used as a source for the piped water supply scheme in the village. In 2010, under the Swajaldhara scheme a 50,000 litre elevated storage reservoir was built which serves more than 180 stand posts located in front of the houses. Water is supplied every two days for a duration of 15min.

An analysis of the data obtained from the household survey revealed that the amount of water supplied in those same 15 minutes varied from 30 to 320 liters. The reason for this according to locals is improper piping design. 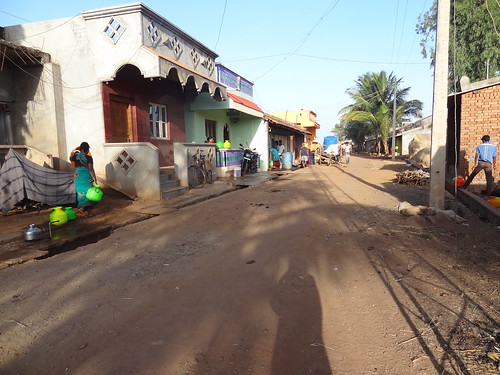 The water supplied by the piped water supply scheme in Kattanbhavi is inadequate for household purposes; hence people draw water from the bore wells present in the nearby farmlands. Even though the borewells are privately owned, the owners are willing to share the water when in abundance. Still, as per the sample, the amount of water drawn per capita varies greatly between the two different communities of Kattanbhavi, namely the Marathas and the Naiks.

The borewells are located at a distance of 1.2 km and 1.8 km from the habitation and the Naiks, who are below the poverty line (BPL) and who do not have bullock carts or automated vehicles to bring the water, as opposed to most of the Marathas. Such a barrier has resulted in a wide gap between the total water drawn between the two communities. The Marathas draw 69 LPCD (APL Maratha) and 71 LPCD (BPL Maratha), but the Naik households draw only 45 LPCD. From these numbers, the economic status of the household is not the marker of difference, but caste also plays an opportunistic role in access to water.

The gap in the water drawn by these communities is a direct manifestation of the economic status of the community, which enables or prevents their accessibility to the particular water source. The economic status is further tied to the caste system prevailing in the area. Also, the perceived water scarcity is not just a result of water unavailability in the area but is also linked to the lack of accessibility to the available water source.

The report on which this article is based can be downloaded below. Karishma and Abhiram study at the Center for Technology Alternatives in Rural Areas Department, Indian Institute of Technology, Bombay.