ARTICLES
No toilet, no job
Panchayat presidents of Namakkal district get people to build toilets at home by banning them from work until they do so.

Thipramahadevi Pudhur is a village in Erumapatti Block, Namakkal District with 115 households. In July this year, this village was declared as ‘open-defecation free’ (ODF), something that was aided by Leaf Society, an organization based in Namakkal and their effective strategy of awareness generation, and leveraging of government loans to communities via convergence.

The process – Bombard with information

The work that goes into achieving the ODF status is multi pronged. It starts with village sensitization campaigns through the use of multimedia. Joyful Learning Centers, where children learn about hygiene practices through games, rewards and reinforcement, have been set up. “These children go home to their mothers who are also given the same information. The idea is to bombard the family with information, continuously”, says Sathyanesan, Director of Leaf Society.

The video below was used at the village sensitization programmes in Namakkal.

“Door to door campaigning is an important part of our approach. We spend a maximum of 20 minutes in each house explaining what happens when some families in the villages have toilets and others don’t, with respect to the spread of fecal matter. This helps them understand the need for all families to have toilets”, Sathyanesan says.

The Society leverages Rs. 10,000 through government funds, which is just a token of encouragement. Most people add more money in order to customise the toilet according to their preferences. Once the construction is complete, other options of water connection, water tank, material for kitchen gardening, etc are provided. All toilets that have been built are in use and it has taken three years to achieve this. 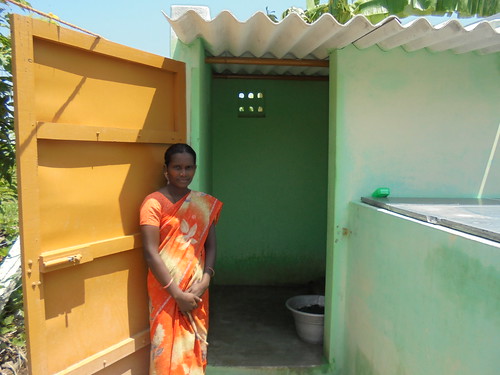 The enthusiastic Panchayat Presidents of Namakkal

Senkodan, the President of Thipramahadevi Panchayat talks about how a complete change in mindset was brought about in Pudhur. “We believe that children are the best agents of change. Once they are convinced, the children would then go ask their parents to build toilets. I also told the men and women of the village they cannot go to work if they don’t have a toilet”, he says.

The Panchayat presidents also work with the community on a personal level. “I first convinced my supporters in the village. Then, the families nearby slowly started to consider the proposal”, he says. Another village called Palayur in Thipramahadevi Panchyat is now 75% open defecation free.

Sangeetha, the Water and Sanitation Promoter (WSP) who is involved in the door to door campaigns in Thipramahadevi Pudhur says women did not feel safe when they had to relieve themselves outdoors. She says “We always stepped out with the fear of being watched, or attacked by dogs and snakes. But now, because of Leaf Society and our hard-working and active Panchayat president, nobody goes into the field to relieve themselves any more and children are happy. There is no fear”.

The journey to achieving the ODF status is definitely not an easy one. The president of Valayapatti Panchayat, Anandakumar says it has been a very long and difficult road to convince people about the importance of toilets. “My panchayat has a population of about 20,000, of which 1000 households do not have toilets. When we approached the government for loans, we were told that for such a large population, it would not be possible. It was a difficult process to convince them to approve the scheme”.

Once approved, awareness campaigns and meetings were held In the community but the response from the people was very poor. Rejection from the community was to such an extent that when the President made it clear that people could not work unless they constructed a toilet at home, they went to the District Collector. A petition was filed against him at the Collectorate. At first a few of them went to the collector in an auto, then more joined them in a Tempo. After a few weeks, Lorries full of people went to see the collector to complain against him. But the collector was strict in that he wanted them to construct toilets and then start going to work.

After a lot of effort, 750 toilets have been built so far in Valayapatti. But that wasn’t the end, getting them to use the toilets was a bigger challenge. Door to door campaigning and working with children has been effective in this panchayat as well. All schools in this Panchayat have toilets. “I am determined to complete the construction of 1000 toilets this year and win the ODF award next year”, he says with a smile.

People who are convinced enough to construct a toilet in their home don’t want to do a haphazard job. “They want neat toilets built for which they don’t mind contributing extra money for it. In my Panchayat, some people are willing to spend anywhere between Rs.60,000 to Rs. 1 Lakh for a toilet”, says Shanthipalanivelan, whose wife is the president of Konangipatti Panchayat.

After seeing the success of Thipramahadevi Panchayat, Presidents nearby are more and mroe eager to have their Panchayats declared as ODF.

Get the latest news on water, straight to your inbox
Subscribe Now
Topic
Sanitation and Hygiene
Toilets and Urinals
Rural Sanitation
Sub categories
News and ArticlesPeople and OrganisationsSuccess Stories and Case Studies
Regions
Political
Tamil Nadu
Namakkal District
Namakkal
Continue reading
Sign up for our newsletter
A newsletter from India Water Portal for the latest updates around water and related issues in India.
About
Contact
Terms of use
Privacy Policy
Subscribe