ARTICLES
NASA satellite tracks changes in Earth's freshwater distribution
Recent space observations of freshwater storage by the Gravity Recovery and Climate Experiment (Grace) are providing a new picture of how Earth's most precious natural resource is distributed globally and how it is changing. 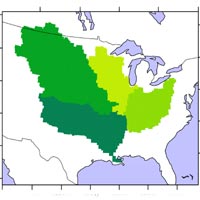 (Image taken from the NASA page mentioned below) Several African basins, such as the Congo, Zambezi and Nile, show significant drying over the past five years. In the United States, the Mississippi and Colorado River basins show water storage increases during that time. Such information is vital for managing water resources in vulnerable parts of Africa and Southeast Asia, since increasing populations and standards of living place demands on water resources that are often unsustainable. The data can be used to make more informed regional water-management decisions.