Doing', rather than 'talking' water

Sabita Kaushal
16 Dec, 2014 . 3 mins read
Students at Nehru Memorial Museum & Library were engaged in an interactive session on different aspects of water including learning how much (or little!) water there is for our consumption.

Every school going child knows that the earth is called the Blue Planet, because nearly 70% of its surface is covered with water. All pictures of the earth show a blue green earth, dotted by land masses. So how would we explain the idea of water scarcity to them?

It was with this background that we approached a room filled with boisterous children at Nehru Memorial Museum & Library (NMML). To keep the kids engaged right from the get go, we decided to explore water from different angles, and rather than giving a talk, we decided to keep the forum open and interactive.

We started off with a short video on water, which showed dolphins that frolicked happily, flamingos that effortlessly coloured the water pink, and children who jumped, ducked and screamed in ice cold spring waters. It was a water palette that showcased how life, water and the earth are all inter connected.

Experiment with water bottles: How much water is available for human consumption?

To show them how much water is truly available to us for drinking, we took two 2 litre bottles, and filled one of them with blue coloured water. The children were asked to imagine that we had somehow collected and squeezed into this bottle all the earth’s available water. Amidst the derisive laughter received, they were then asked to guess as to how much water out of this bottle they thought was available for our consumption. The answers ranged from ½ of the bottle to nearly the whole bottle.

And that set the stage for our session. 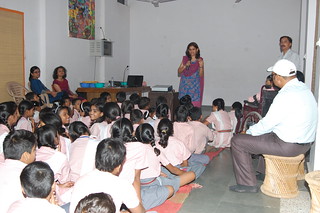 water’. This represented the 97% of water found in the seas and oceans. The remaining 50 ml, we marked as ‘fresh water’. Out of this we poured out 35 ml and marked it as ‘ice caps’. Of the last 15 ml left, we carefully measured 14.5 ml into a glass and marked it as ‘water in soil, air & underground’. The water left in the bottle -- barely 2 drops -- we poured into a spoon. This was the actual water available for all the human beings to use.

The sight of the 2 drops in a spoon stopped the giggles and they began to pay some serious attention.

With a simple picture presentation, we did an oral rendition of Anupam Mishra’s beautiful story ‘Dai ke Talaab’, which has a gripping plot with a rich king, his honest advisor, an intelligent boy and of course a ‘dai ma’ who uses her hard earned money to build lakes for the whole village. Even today in Darbhanga, where the story unfolds, there are many old, man- made lakes, which give credence to this story.

How did our forefathers fulfil their water demands? How did they deal with scarcity and why are we unable to do so now? A short video film ‘Paani Re Paani’ by Sai Paranjpye, opened up new ideas and thoughts on water issues.

By the end of the movie, the children needed to talk and talk some more! They could no longer sit still, so we had a short quiz where the questions were based on what they had heard and seen. The hands that shot up to answer were many and soon we faced a volley of answers, followed by discussions. 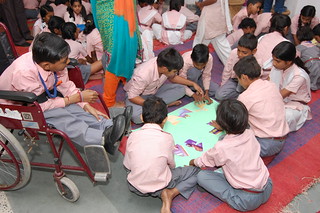 We ended the session with a jigsaw puzzle, which was made from a water theme- based poster, cut into a number of chunks. The teams had to assemble and paste the pieces on a chart and pin the chart onto the board outside. Needless to say the enthusiasm was infectious! The children doubled over their sheets to get their collage right and ran to win their place under the sun!

The interaction and two way dialogues that we had left us and the children tired, but definitely a little more water- aware!

View more pictures of the interaction at NMML.

Post By: sabitakaushal
Topic
Climate and WeatherRainfall and other forms of PrecipitationDrinking and other Domestic UsesEcology and EnvironmentGroundwaterSurface Water
Sub Categories
Events
News and Articles
Regions
Political
Delhi