Floating gardens for the landless

Jagannath Chatterjee
17 Feb, 2016 . 4 mins read
Flood affected areas in coastal Odisha have adopted new ways of farming. Called floating gardens, these have the scope to reduce the food insecurities of the landless poor.

The coastal district of Puri in Odisha is infested with water hyacinth. In 1982, 10 million people and 3 million hectares of agricultural land was affected by floods causing the water hyacinth to increase to such an extent that it has affected the lives and livelihood of communities for almost three decades.

“The uncontrolled growth of water hyacinth has made our lives miserable. We did our best to clean up our ponds and water sources, but it kept growing. When we take it out and dump it, it rots. If we allow it to grow, it renders our water resources unusable and becomes a resting place for snakes and numerous insects”, says Jagabandhu Biswal, a resident of Dahana village of Madhuban Gram Panchayat. Not only this but the water hyacinth also clogs agricultural canals, affects farming systems and attracts birds which feed on the insects and also on the paddy grains.

The livelihoods of marginalised people in coastal Odisha are often constrained by 7-8 months of water stagnation due to floods. To solve the problem due to water hyacinth, the Regional Centre for Development Cooperation (RCDC) team consulted Ardhendu Sekhar Chatterjee, noted sustainable agriculture proponent, who suggested initiating the floating garden concept in the region. 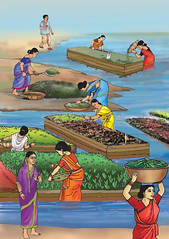 What is a floating garden?

Floating gardens--a concept which is not new to India thanks to Srinagar's Dal Lake--are farms made on water bodies. Bamboo beds with an average size of 20ft x 5ft x 1ft are constructed and floated on the water bodies. At the bottom of the bed surface, dried water hyacinth is intertwined to form a mesh. On this mesh, a 4-inch layer mixture of silt and chopped water hyacinth leaves is made. Above this is a 5-inch layer of a mixture of silt, vermicompost and farm yard manure. The top most layer is packed with a 3-inch mixture of dry leaves of leguminous plants, soil and silt.

Impacts of the floating garden system

Jharendra Maharana of Dahana village lost his lands due to floods. In order to support his wife Lakshmi, two sons aged 17 and 19 and his parents, he now works as a carpenter and earns around Rs. 7000 per month. Even this isn't enough and his expenses often overshoot his income. Lakshmi is an active woman in her mid-thirties and once took part in the Gram Prayas Committee (GPC) meetings constituted by RCDC. In the meeting, RCDC officials showed a documentary on the floating garden concept and discussed its advantages.

Lakshmi wanted to support her family, and so contacted the RCDC staff for technical assistance.“I was delighted to learn that I could produce food without having to worry about land”, she says. So she attended two do-it-yourself training sessions organised by RCDC in the village itself on designing and setting up a floating garden. The prospect of cultivating on a common water body was appealing especially when water hyacinth infestation covered the water bodies. 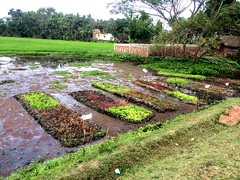 She started the first floating garden unit in May 2013 for which she received an initial support of Rs. 2000 from RCDC. Her first harvest included two types of greens, koshala and palanga (two kinds of local vegetables) and her family consumed it for around 45 days by resorting to staggered harvesting.

"After planting the above vegetables, we planted khada, saga and tomato, and other plants for local consumption. For two months we did not purchase any vegetables from outside. We also got an opportunity to sell the compost to other farmers after the second harvest", says Lakshmi.

The idea is to grow greens, spices, and leafy vegetables for daily consumption to fulfill the nutritional need of the family. For better nutrition management, plantation is preferred on a rotational basis. "Our expenses on vegetables have reduced substantially. Now we can also save some money for ourselves. Next time I will go in for more beds and cultivate vegetables that I can also sell," says Lakshmi in a jubilant mood.

Floating farms can help the landless poor to eke out a living during floods and also reduce food insecurity. The government must look into setting up schemes to support this initiative.