According to the Swachh Bharat Mission (SBM) website, access to toilets has improved in India and 28 out of 36 states and Union Territories are now open defecation free (ODF). While that’s good news, managing faecal sludge in ODF states in an eco-friendly way continues to be a big challenge.

In India, septic tanks are the go-to method for faecal sludge management. The toilet’s septic tank is filled with urine, faecal matter and water. When the tank is full, the waste is emptied either manually or using machines. However, this method has various limitations like faecal matter getting dumped close to the habitation which would affect the soil and the sources of water.

“A recent study by WaterAid India finds that despite the promotion of twin-pit toilets by the Ministry of Drinking Water and Sanitation, there seems to be a high preference for septic tank toilets by the beneficiaries. Out of 1,000 households which were surveyed in the study, 24 percent preferred septic tanks. But the problem is, what people call septic tanks are not according to the Bureau of Indian Standards. This will surely lead to contamination of soil and water in the long run,” says Anurag Gupta, coordinator of WaterAid, Chhattisgarh.

Gramalaya, a non-government organisation (NGO) working on water and sanitation in India since 1987 successfully demonstrated that with the use of eco-friendly toilets, the problem of faecal sludge could be addressed in an effective and sustainable way. Gramalaya field-tested several rural and urban sanitation models for individual households and schools.

Evapotranspiration toilet technology is an eco-friendly technology and a zero waste model. It is a natural, zero discharge system which digests, absorbs, and releases human excreta. It was developed and popularised over the last two to three decades by permaculture practitioners in different countries, especially the US and Brazil. But in India, this technology was tried successfully in Raebareli district in Uttar Pradesh by an independent researcher Marta Vanduzer-Snow.

The evapotranspiration toilet uses old tyres as the main component for the faecal digester tank. The toilet’s tank is lined with a non-porous material and then filled with layers that consist of broken bricks, tyres, stones, sand and soil. The tyres are arranged in a trench forming a tunnel. On top, broadleaf plants like banana and canna are planted to absorb water from the soil.

“The toilet technology is based on the principle that anaerobic digestion that converts a portion of the human excreta into biogas, exiting from the front and back-stand pipes. The digested waste from the digester travels up through capillary action. It contains nutrients that are absorbed by the plant roots. Evapotranspiration removes the liquid, either transpiring through the plants or evaporating at the surface from the soil,” says Anurag Gupta, coordinator of WaterAid, Chhattisgarh. 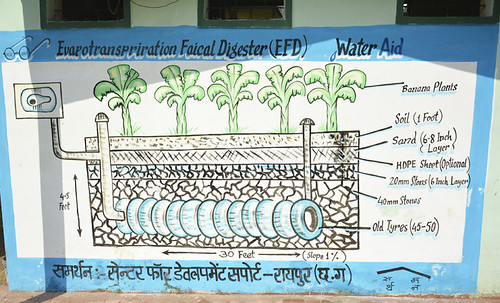 For field demonstration, in 2018, WaterAid first tested this technology in government girls’ school hostel at Sarona Panchayat in Kanker district. It houses 50 tribal students and has six toilets. The hostel has two septic tanks which need to be emptied three times in a year manually. The hostel also faces problems in disposing of the faecal matter, the cost of which is Rs 18000- Rs 20,000 a year.

With WaterAid's technical inputs, the Samarthan team disconnected the septic tanks of the hostel from the six toilets and directly connected the outlet of the toilet pipes to the two evapotranspiration digesters. It took two days to install the entire system with an approximate cost of Rs 25000. The best part of this technology is that the size of the evapotranspiration system could be modified according to the need of the users. The construction cost will then vary accordingly.

Within a month of its installation, the project team received a positive response from the school authorities.

“We are very happy with this toilet system. For better performance, we have planted some more canna and banana plants on the digester tank which has made our surroundings greener. The toilet use of the students has significantly improved because now our toilets don't stink and no one defecates in the open,” says Samaru Kodopi, school principal, Sarona girls school.

After the successful implementation of the project, the Samarthan and WaterAid wanted to test this system in another location. In the same year, they took another initiative and selected the defunct community toilet at Shankarnagar slum in Kumhari, a small town in Durg district.

The municipal council of Kumhari had built a community toilet in Shankarnagar which, due to lack of maintenance, had become dysfunctional. The filthy smell from the septic tank became a serious problem for the residents. With no other alternative, the residents started defecating in the open.

Due to the lack of space in the built-up area of the community toilet complex, WaterAid decided to use the existing septic tank. They suggested to Samarthan that they connect the outlet of the septic tank of the community toilet to the evapotranspiration digester. The overflow of the sludge from the septic tank was diverted to the digester. The idea worked and the toilet usage by the residents of Shankarnagar improved.

“The newly installed system is advanced, well maintained, does not smell and looks nice. Most of the residents who don't have a household toilet have started using the community toilet facility on a regular basis now,” says Santoshi Sona, a resident of Shankarnagar.

“Due to its high success rate, the Ministry of Drinking Water and Sanitation has added this technology to the list of appropriate toilet technology design. Implementing this type of toilet model could be very effective in places where sewage network systems do not exist,”  says Manish Jha, programme coordinator, Samarthan.

Bio-toilet is a next-generation environment-friendly toilet which converts human faeces into gas and water with the help of anaerobic bacterial Inoculum, a bacterial culture medium. This system is completely maintenance-free and does not require any sewerage system. These bio-toilets can be installed anywhere and doesn't need a big septic tank or a sewage facility.

The toilet has a multi-chambered bio-tank for the storage of human waste. As the waste flows down through different chambers that contain the multi-strain bio-media, the waste converts fully into non-toxic neutral water and methane gas. 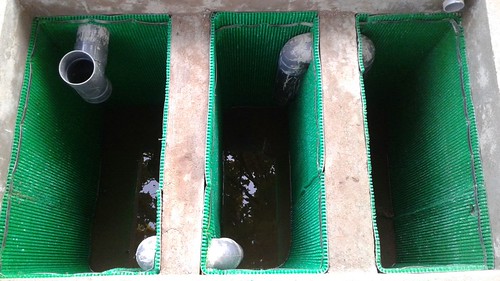 Madhulal Chakradhari, a man in his late 40s is one such beneficiary out of the six who built this toilet in his house at Modimathwara village of Pandripani Panchayat in Kanker district. A mason himself, he knew well that the septic tank model has not worked well in his area. So, when he received Rs 12000 from the government for toilet construction under SBM, he invested another Rs 10,000 for installing a bio-digester in his toilet.

Later, Raigarh district administration adopted the bio-toilet model in the hard rock terrain area. Under the SBM, more than 200 household bio-toilets were constructed in Raigarh. The additional cost for construction of bio-toilets apart from SBM toilet fund per household had been provisioned from District Mineral Foundation (DMF), an NGO working for the interest and benefit of persons and areas affected by mining-related operations. The disadvantages of this model include high logistics cost involved in the transportation of bacteria, higher cost than a leach-pit toilet and other logistical issues.

EcoSan is a dry composting toilet with a separate opening for collection of urine. It can provide sanitation in an eco-friendly way in difficult terrains and in areas with high water tables. The entire structure of the toilet is constructed on a raised platform.

The district administrations of Korba and Kanker districts facilitated the construction of 140 EcoSan toilets in 14 panchayats under the SBM with technical help from WaterAid and Samarthan. In Kanker, the district administration had provided additional incentive from the District Mineral Foundation (DMF) to cover the extra cost incurred on construction on Ecosan toilets. 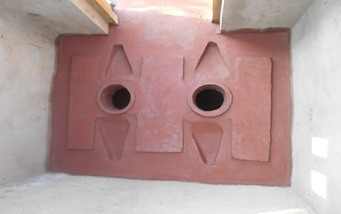 “We used poly-fibre squatting pans for EcoSan toilets. Since these were not available in Chhattisgarh and had to be purchased from another state, the cost per toilet increased to around Rs 16,000. This cost was not viable and made it difficult to get support from the government's Nirmal Bharat Abhiyan programme (formerly the Total Sanitation Campaign), which can provide up to Rs 10,000 for the construction of household toilets. To ensure the sustainability of the project, the unit cost of the toilet has to be reduced. Thus, WaterAid, instead of procuring traditional poly-fibre pans, trained masons to construct the floor of the toilets as EcoSan pans. This has considerably reduced the cost of the toilet to just Rs 12,000 per unit,” says Rajendra Soni, SBM cluster Coordinator, Kanker.

Chicu and her green toilet video will provide an overview of the ecosan toilet.