Manu Moudgil
11 Jan, 2016 . 5 mins read
The Kondh tribes believe that the more one visits the farm, the better the crops will be because the bond between man, land and plant strengthens. Mixed cropping furthers this thought.

Aadi Kumbruka with various types of legumes, millets, oilseeds and corns grown on his farm.

Bamboo trees bloomed with long wispy spikes weighing heavy on the stalks. While it might've made for a pretty picture, Loknath Nauri knew it would be a tough year. “More the density of the flowers, the more severe the drought we face,” he says. This was in March 2015 in the forests of southern Odisha.

Around the same time, he saw something else that confirmed his feeling. This time, it was the Black-hooded Oriole, a small bird known as ‘Bhartia’ in the local dialect. The mouth of its nest was facing west. “We get monsoon rains from the west to the east. The nest normally faces the east to avoid the shower, but this year, it was the reverse which meant that there wouldn’t be much rain", Nauri says. Such cues about future events imbue the lives of the Kondh tribes of Odisha.

Nauri's farm at Korandiguda village in Rayagada district is looked over by the Niyamgiri hills, the place where the Kondhs sent packing the bauxite mining project of multinational Vedanta Resources in 2013. He also belongs to the Kondh tribe but unlike those in Niyamgiri who indulge in 'slash and burn' or shifting cultivation, his forefathers learnt to work on permanent fields in the plains. They regularly used manure, ploughed, irrigated, removed weeds and mulched. Even today, they continue to grow crops on small untilled pockets of the lower hills called dongar.

But what keeps the tribals connected to their roots is the diversity their fields possess despite inroads made by commercial and chemical agriculture in the last 15 years.

Nauri grows 72 varieties of crop on his two acre farm mainly to reap the health and nutrient benefits of mixed cropping but in the last five years, he has also realised that the farm has greater resilience to the changing skies. “The benefit of mixed cropping is that even in extreme weather events, we get something out of the field. Some crops work well in drought, others in flood. Compare this with mono cropping which won’t even yield enough to eat in severe drought", he explains.

At the COP21 Climate Change Conference held in Paris in December 2015, indigenous people from across the world like Nauri tried unsuccessfully to get recognition for the traditional knowledge they possess on how to deal with the looming climate crisis. In Odisha too, the tribals are fighting a battle against market forces.

In 1994-95, cotton farmers from Andhra Pradesh came to Rayagada and introduced hybrid cotton, luring tribals to the cash crop. In 1995, a high-yielding paddy variety was introduced. Along came fertilizers and pesticides which were given free for a year. Soon, people were lured by the promise of bumper yields and a luxurious future. 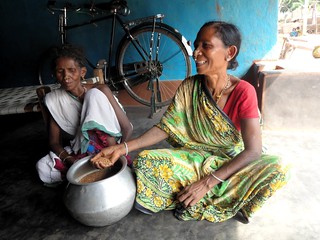 Domburu Toika was caught in the same whirlpool. A middle-aged man with a pencil moustache and a medium physique, he can rattle off the names of various paddy varieties and their life cycles without a slip. Until a few years ago he was growing hybrid paddy using costly seeds and chemical fertilizers. “Company agents had lured us with promises of a bumper production and a rich future if we used their products. And they did work initially but we are dependent on rain for irrigation and hybrid seeds need a good amount of water to flourish. Five years ago, the entire crop failed due to drought. I had to take a loan of Rs 60,000", he recalls.

To repay the debt, Toika had to lease out his farm. Thanks to the dongar land, he was able to sustain his family as it yielded a variety of millets, oilseeds and spices, some of which were bartered for rice. Now he relies on traditional seeds which can be farm-saved while costing nothing. “This year, we again got less rain. The hybrid variety was sown in the land near a pond to ensure good moisture but it has not matured yet and I am not expecting more than one quintal per acre. On the other hand, the traditional rice variety has already given me 12 quintals per acre with a single irrigation. Next year, I am planning to further increase the area under traditional variety", Toika says.

The cost of farming has also come down as there is no expenditure on chemicals, seeds, labour or machines. “Farm-saved seeds, composting, mulching and bio-fertilizers made with natural ingredients are used to nurture the crops. So, any money earned is a profit", Toika says.

Wisdom and its fruits

At Kondhavguda village, around 20 houses belonging to one extended family sit on a flat plot in an otherwise undulating land. Most people are out in the forest to pick wild food or firewood, tending to farms, washing at streams or carving out bricks from the soil of a muddy ditch despite a threateningly overcast sky. Many of the men have slim but chiseled physiques, reminders of the hard work they do, shaming occasional urban visitors like me with paunches.

Here every field hosts around 30 varieties of crops in a single year. The farm I'm visiting grows more than 60. Aadi Kumbruka, looking much younger than his 30 years, harvests 85 varieties of crops many of which he sells through his small grocery shop. A concern for the fast depleting food diversity made him a farm scientist in his own right.

In 2010 Living Farms, a group working on sustainab 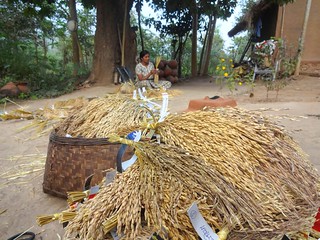 le agriculture and ecological issues in the area, organised a seed exchange event with scientist and conservator Dr Debal Deb. Aadi, who was till then only relying on friends and relatives to gather knowledge about various crop varieties, was naturally inclined. Today, he gives lessons to other farmers on mixed cropping and also earns Rs 200 a day from his farm.

“Nothing goes waste. Even a failed crop acts as mulch and manure for the others. Pulses fix nitrogen while millets fix phosphorus. Tall plants like maize support the vines which in turn don't let it fall on windy days", Aadi infers.

Multiple crops also help deal with pests and diseases, which are increasing with the changing weather. “On the boundary, we sow mustard, jatropha and other oil seeds which repel or impede the progress of insects towards the inner field which has millets, paddy and other grains interspersed with seasonal vegetables. A sprinkling of bio-pesticides made of cow urine, ash and vegetable skins also helps,” Aadi says.

Tribals believe that more you visit the farm, better the crops because the bond between man, land and plant strengthens. Mixed cropping furthers this thought as there’s always something to be harvested, and something to be sown.

No wonder it spells harmony for everyone.