Manu Moudgil
10 Dec, 2014 . 6 mins read
Only a few of Bikaner's over 100 ponds are well-maintained today, some thanks to the efforts of citizens, and another due to rooftop rainwater being channeled. Could the remaining get as lucky?

Water connects food and religion. Religious ceremonies often involve taking a dip in a water body, and any food or meal is incomplete without water. The same two things - food and religion - stand out in Bikaner. While hot kachoris and samosas line street stalls, Mata Karni Devi and Baba Ramdev (not the yoga guru) shower their blessings from billboards and wall paintings. Ironically though, Bikaner is not rich in water since it is on the western side of Rajasthan. As unlikely a candidate as it is to be a religious and food hub, it only became so because of its ponds.

Most of this was possible thanks to water harvesting conceived by the locals through numerous ponds, lakes and small tanks. Dr. Brajrattan Joshi, who has documented the status of these water bodies in his book ‘Jal Aur Samaaj’, says the city once had more than 100 ponds. “Most of these ponds were built and managed by the society. The king or local administration had little role to play. Besides those meeting consumption needs, ponds were even built on occasions of births and deaths in form of penance and prayer or just as status symbols,” he says.

However, the story today is very different as the city’s pride is in a state of despair. Encroachments on catchment areas have reduced the water inflow while lack of desiltation and upkeep has turned them into garbage dumps. 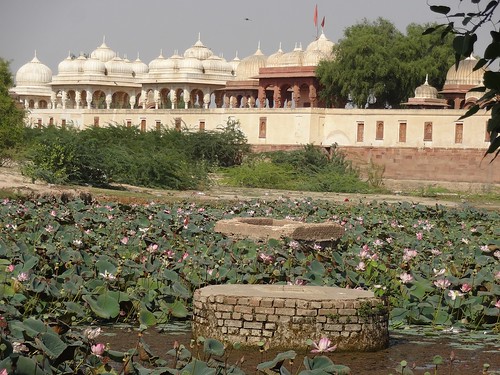 "It was in 1961 when Bikaner started getting tapped water supply from wells and canal. Gradually, it covered the whole town and led to the neglect of the very ponds which had been serving the community for centuries", says Dr Joshi.

On the outskirts of the city, the sky is covered with hundreds of chhatris (cenotaphs) erected as memoriams to the members of the royal family. This cremation ground and memorial is surrounded on three sides by the Kalyansagar pond. The pond boasted seven wells which gave sweet water. Today, only two of these wells are evident while the pond has turned into a marshy land hosting a herd of lotus plants.

Dr Joshi’s book, which chronicles the history of the city’s ponds, helped create awareness about their importance leading to several efforts being made to revive them. However, most of them remained superficial. For instance, the Acharya community of the city which built and managed the Dharnidhar pond, sought his advice on how to revive it but did not follow it. “Instead they have filled up the whole pond and are now coming up with a new concrete structure a few meters away complete with fancy lights and fountains to attract tourists. It will be more of an artificial spot than a pond in tune with its surroundings,” he says.

Harsholaav, built and managed till date by the Harsh community, is one pond which has still preserved its original outlook and catchment area. There is a segregated bathing area for women with special lattice work. This disallows outsiders to peer through while women can watch the outside proceedings while taking a bath. The pond also has a jumping stand which helped train many a swimmer. 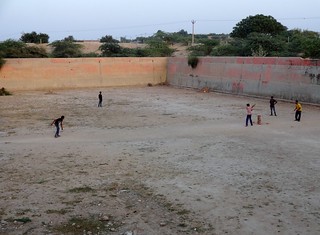 In 2010, the administration allocated Rs 70 lakh each to Sansolaav, Shivbari and Harsholaav ponds but it seems that the money has literally gone down the drain. At Shivbari pond, the bed remains dry even after a good monsoon and children use it as a cricket pitch. “The pond was desilted with the government grant in order to increase the holding capacity but excavations done did not consider the geological composition and ended up destroying the water-holding layer of the soil. Now the pond is like a sieve from which the water drains out to unknown depths,” Dr Joshi says. Though some corrective measures like putting polythene layers under the ground were taken, they were not successful.

Citizens save the day

Though the current narrative on Bikaner’s ponds is dismal thanks to the neglect by the government and society, there have been some spirited citizens trying to make a difference.

Sansolaav is believed to be the oldest of the city’s ponds. Built in the 16th century, it is an ideal picnic spot what with memorial chhatris (cenotaphs) overlooking the ghats. However, the pond’s catchment area running into hundreds of hectares has largely been encroached upon with around 200 houses and offices constructed on it. This is why not much water flows into the pond, which is now also a cesspool thanks to garbage from the surrounding areas. “Earlier, the same people used to fetch water from this pond for their daily needs and it was an important spot for religious rituals,” says Dr Joshi.

It was Nathu Maharaj, a local priest, who waged a lone battle against the encroachments through hunger strikes and dharnas forcing the administration to act. Thanks to his efforts, no new structure has come up on the catchment area in recent times. He also ensured good upkeep of the pond till his demise in 2012.

Madangopal Vyas, a retired teacher who comes to Sansolaav with a group of senior citizens every day, does his bit to keep the area clean. He and his friends have also planted a number of trees in the pond’s catchment area over the years but there’s little hope in his words. “As the older generation passes away, knowledge about the value of natural resources like this pond will wither away. Water today comes in bottles you can buy. If we continue to neglect our ponds, one day water will be as costly as ghee,” he prophesies.

That modern interventions can also be beneficial is evident from the restoration of Krishnani Vyason ki Talai, a tank surrounded by tall houses which encroached upon the original catchment area over the years. This tank was in a similar state as the other water bodies of the city but thanks to the ‘Amritam Jalam’ campaign of a regional newspaper ‘Rajasthan Patrika’, it has got a fresh lease of life.

After extensive discussions with experts and locals on how to restore the inflow to the tank, an innovative solution was devised. All the house owners of the locality were asked to keep their rooftops clean before the monsoon and pipes leading to the tank were laid from each roof. The money needed for this work was also generated from the community and today the water body fills to the brim during monsoons.

Though this may be a one-off instance, it is a good community model to replicate in the present context of increasing population and decreasing land in the cities.

This write up was done with guidance of Dr Brajrattan Joshi, author of the book 'Jal Aur Samaaj' on Bikaner's ponds.