Anupam Mishra: The Gandhian I know

Manu Moudgil
23 Dec, 2016 . 5 mins read
Anupam ji’s work can’t be measured in words, least of all by me. Here are some of my memories of him over a few years.

“I remember I need to work on that article of yours. Will do that when I get better,” Anupam ji said taking my hands in his. He had gone weak, was in a lot of pain but still took out the time to attend the inaugural day of India Rivers’ Week (IRW) last month. That he remembered a promise he had made five months back amidst all that he was going through surprised me. But then I reminded myself: “This is Anupam ji. Nothing can put him down.”

It was around six years back that a friend I lived with lent me Anupam ji’s famous work, Aaj Bhi Khare Hain Talab. I had already heard about him from another close friend several times. After reading just two pages, I decided I am never returning this book, a sacrilegious act among book lovers. As can be confirmed by anyone who has read this book, it offers several new insights into ways to perceive the world besides it being a go-to book on water conservation.

I shed tears of joy and felt inspired by the in-depth writing on water heritage built on the goodness of people. “Ache ache kaam karte jaana (move on doing the good work)”, is a phrase from the book that resonates with many of his readers.

I was also charmed by the way he had put his thoughts to paper. “Can Hindi be written like this,” I had wondered thinking about all those insipid syllabus books, fiction and newspaper articles I had read till then. Of course, I went ahead and read more well-written Hindi books through recommendations, but the prose of Anupam ji is still the yardstick I measure any non-fiction with. Brajrattan Joshi, a Hindi professor at Bikaner, reaffirmed my belief later when he told me he has got Anupam ji’s books as part of the curriculum for college students on writing style. 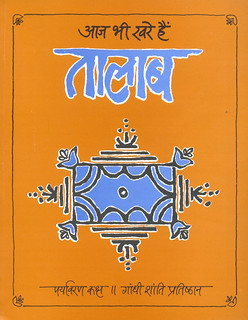 After a couple of rereadings of Aaj bhi..., I was yearning to meet him. A call was made to his office at the Gandhi Peace Foundation (GPF). “Anupam,” he used to say after picking the phone instead of a usual “Hello”, establishing an instant connection. I dropped names of our common friends hoping to secure an appointment knowing little that such formalities were not needed. “I am busy today, would have kept some time if I had known you wished to come. Please do visit tomorrow and we will have lunch together. It is simple food but you will enjoy,” he said. It was all unexpected.

Going by his fame, I had imagined somebody with people running around him, at least a couple of computers on display and cell phones caroling frequently. But here was a man working without a cellphone or a computer, surrounded by letters people wrote to him. A couple of wooden almirahs adorned with old postcards and images of famous personalities from Gandhi ji to Sunita Narain, stood in his room. As we relished the food at the GPF canteen, he enquired about my interests and thoughts while sharing his insights.

He came out to drop me at the adjacent bus stop and amazed me with his compassion: “Just because you know me and our friends who work on water, doesn’t mean you have to do the same. Do what you feel like.” “How did he read my mind?,” I wondered. I had no intention at that time of writing on environment and wanted to focus on governance and the right to information. I was also getting sick of environmentalists telling me how important their work was and what I was doing was a waste of time. Though I ended up being an environment journalist, it took a gradual process of self-exploration, the importance of which Anupam ji knew. “Come again sometime. We will have another picnic,” he said while I was leaving.

Over the years, we met infrequently at his office or at events. His writings, talks, television interviews were another way of staying in touch. An endearing write up by his close friend Prabhash Joshi informs us of his younger years and what inspired him. Gandhi Marg, the bi-monthly periodical Anupam ji brought out, was another extension of his personality. It does exceptionally well to make Gandhian philosophy relevant for today’s world. I try to read one write-up from this magazine every morning as the pieces, selected and edited by him, give me the same feeling of oneness with the world as a session of meditation would.

Despite all the goodness he saw in people, Anupam ji was not the one who minced words while criticising something, as could be seen from his public addresses and articles. I also got a good dressing down three years ago when he got to know I was part of a research project studying the public perception of programmes of Doordarshan’s regional channels. Government welfare schemes were also a component of the study and Anupam ji, being a true Gandhian, believed that such support impacts the self-sufficiency of people. “The research subject is good but see to it that it does not end up supporting the government schemes,” he advised.

Five months back Anupam ji had called, after sourcing my number from a friend. He had read my write up on paddy farming in Punjab and was elated. “I have never read such a comprehensive piece on this issue. I would translate it myself, lying in bed while this disease passes by, and publish it in Gandhi Marg,” he had said. It was a big deal for me, as would have been for anyone else. No past appreciation or awards had such a deep resonance. I could not help boasting it to friends. His treatment for prostate cancer was almost over and we all were expecting him to continue to mentor us.

But by November this year, it became apparent that cancer had spread to other parts of the body. Everybody was feeling dismal but not Anupam ji. Despite all that pain, he displayed his trademark wisdom and wit while addressing IRW.

Anupam ji has moved on and as this write up says, it will be hard to replace him. Aaj Bhi Khare Hain Talab remains a book I read whenever upset with the way things are in the world. It never fails to turn me into an optimist. May be it’s time to read it once again.