Sanitation is a familiar term but is often misunderstood to mean the building and using of toilets but this isn’t true. It covers a whole range of thought and action both pre and post latrine use, which includes cleanliness, personal hygiene and the safe disposal of the urine and faeces. Getting this message across in rural areas where open defecation and overall lack of hygiene is widespread is really important to tackling this problem. 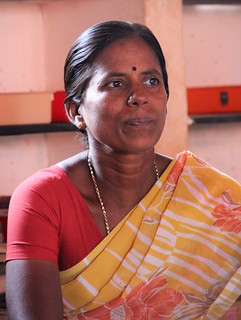 Meet Backiam, a Water and Sanitation Promoter in Pallandanpatti Panchayat in Viralimalai block of Pudukottai district that is made up of 5-6 villages. Trained on various aspects of sanitation and personal hygiene, her job is to pass on this training to the village children. She is also the go-to person if the villagers have any doubts on anything related to sanitation. She advices them on how to construct a toilet or get individual water pipe connections for their homes and so on.

Two things qualify her for this role – one, she has to be a resident of one of the villages in the Panchayat and two, she has to be very enthusiastic as she is the key to building a foundation for a strong and motivated field force. The WSP’s role is a big experiment on volunteerism. It rides on the belief that there is a spirit of ownership among villagers that can be tapped into by someone within their own community. For hardly Rs. 1000 per month, the WSPs walk and talk non-stop! 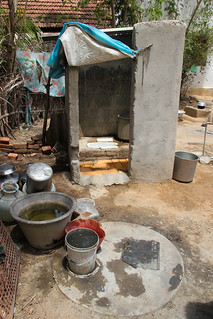 The WSP is a popular figure in the villages. She talks to every family in the village, both individually as well as in groups on a regular basis about the benefits of having a toilet at home. She cycles, walks and takes the bus to villages near and far. People have come to trust her and make informed choices about having toilets in their houses.

Once a week, she visits the local Panchayat-run primary schools and spends an hour or two with the children. She acquaints them with concepts of personal hygiene and sanitation through interactive games and action songs.

To get the children’s attention, she uses a host of educational material. Flip charts detailing how infections spread from a person relieving himself out in the open to someone who is initially infection-free are popular. Sanitation memory games and toilet snakes and ladders are also a part of this game-based approach to teaching children.

Over time, the children are acquainted with the concepts of toilet and hygiene and no longer look at them as alien elements in a village home.The time and effort put into this has already borne fruit. Many children wash their hands after using the toilet or before eating without fail now. Some have also managed to convince their parents into building separate toilets in their houses.

Here you see a group of children from Palandampattiin Viralimalai block of Pudukottai district reciting a poem on why one should use a toilet.

The women of the house are more sensitive to the difficulties of open defecation as they bear the brunt more than men. Mothers want their children to relieve themselves with dignity and this is one of the main motivating factors behind the improved toilet penetration in these villages. 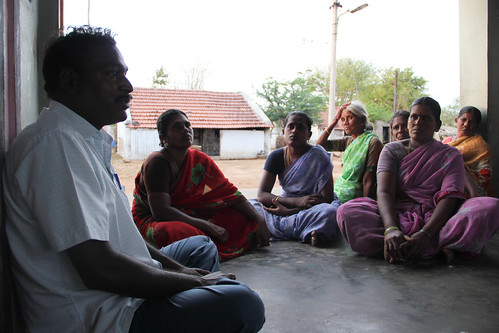 The child-mother communion seems to be working wonders in the villages in which these organizations – Gramalaya, Annai Trust, Indo Trust and Leaf Society – have been working in. Gnanasekaran from Annai Trust in Pudukottai says that the organizations themselves were surprised by the motivation and initiative these ladies have shown. He calls them the ‘hidden resources of the villages’, and rightly so. Even after the organizations involved in these water and sanitation projects leave the villages, they still have an individual who can take the movement forward.

Open defecation is dying a slow death in these villages. The process has been initiated – one child at a time – one toilet at a time. Thank you WSPs.

Get the latest news on water, straight to your inbox
Subscribe Now
Topic
Sanitation and Hygiene
Toilets and Urinals
Society, Culture, Religion and History
Lifestyle
Sustainability
Demand and Consumption
Sub categories
News and ArticlesPhotos, Illustrations and other Images
Regions
Political
Tamil Nadu
Perambalur District
Perambalur
Pudukkottai District
Pudukkottai
Tiruchirappalli District
Tiruchirappalli
Continue reading
Sign up for our newsletter
A newsletter from India Water Portal for the latest updates around water and related issues in India.
About
Contact
Terms of use
Privacy Policy
Subscribe