Water woes of a different kind

'Rabba Rabba Meeh Barsa, Saadi Kothi Daane Paa' (Make it rain God, so our homes remain filled with grains)”, is a popular song taught to children in Punjab. Not all of Punjab. In Southwest Punjab, farmers are praying for the monsoon to fail!

A farmer with 40 acres of land in Punjab is considered rich as it fetches him around Rs 40 lakh every year. But not in the Southwest region. At Shajrana village in Fazillka district, ducks quack away in fields where wheat should have been sown by now.

Farmer Radhekishan's family has to repay a loan of Rs 50 lakh. The last time he harvested a crop was in the severe drought year of 2009. He deems himself lucky that 3 acres of his 40 that lie submerged in water, have been chosen by Guru Angad Dev Veterinary and Animal Sciences University (GADVASU) to establish a pilot fish farm. Today, he works as a daily wager on his own land.

Shajrana was a prosperous village harvesting cotton, wheat and millets until the flood of 1976, when the water laid waste to around 1000 acres. Now, it is just a scattered habitation as many families have moved to the upper side of the village where they can still continue with farming. People also blame seepage from the Gang canal, which runs near the village, for the rise in groundwater levels. 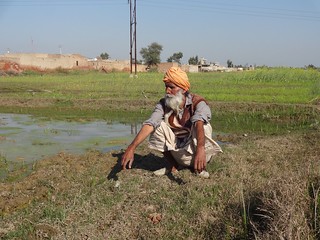 Canals: The solution becomes the problem

The Rajasthan feeder canal, the Gang Canal and the Sirhind feeder pass through this area taking waters from the Harike barrage in Sultanpur to areas of Punjab and Rajasthan. Gang Canal, one of the oldest irrigation systems, was completed in 1928. The Rajasthan feeder canal was constructed in the 1960s after the Indus Water Treaty between India and Pakistan awarded the waters of Ravi, Beas, and Sutlej to India. It was decided to irrigate the Thar desert with this surplus natural resource. The Sirhind feeder is an off shoot of the Ferozepur feeder canal constructed in 1954-55, which opened up irrigation possibilities for south west Punjab.

The introduction of tractors helped level the crests and troughs. Soon, farmers started shifting from cotton to water-intensive paddy cultivation during the kharif season and reaped higher monetary benefits. However, the construction of the canals brought along problems—seepage—which were not evident earlier.

According to estimates from Punjab's Irrigation Department, 25% of the 84,800 hectares of fertile land critically affected by water logging in Faridkot, Muktsar, Malout, Lambi, Abohar and Gidderbaha tracts of Punjab adjoins the Rajasthan and Sirhind feeder canals. Besides seepage, the availability of abundant water free of cost promoted flood irrigation which further added to the problem of waterlogging.

A study sponsored by the Indian Council of Agriculture Research (ICAR) found that the water table in Southwestern Punjab rose by 15-20% per annum after the introduction of canal irrigation.

The natural drainage of Punjab is from the Northeast to the Southwest. At Golewala village in Faridkot, which lies north east of Muktsar, waterlogging is now a thing of past. Mill Singh, who owns 18 acres in the village, recalls how most of the village was affected by groundwater until 1996. “The water remained for 30 years. We would only manage to grow enough for our own needs. Villagers depended on dairy farming. I had 50 cows and buffaloes at the time. Now I have just 3-4 since the fields have started yielding crops again. The water has moved further to Muktsar,” he says.

So, does this mean the water would move further Southwest from Muktsar and Fazillka?

According to M. L. Angurala, hydrogeologist at Chandigarh's regional office of the Central Ground Water Board, further movement is highly unlikely. The topography of this area is such that it is a bowl-shaped tract, which collects water coming from all the sides. “Scientific studies have also predicted a buried ridge running from Delhi to Lahore which crosses the southern end of this area. This ridge also blocks further movement of groundwater from the area. So, both nature and man-made canals have contributed to the problem of waterlogging,” he says.

The groundwater level, which was around 150 feet in 1950-60, has now risen to 5 feet. Relining of canals, construction of drains to take out excess water, aquatic farming and eucalyptus plantations are some of the solutions that were suggested and tried in the area. However, none of these has helped the farmers. 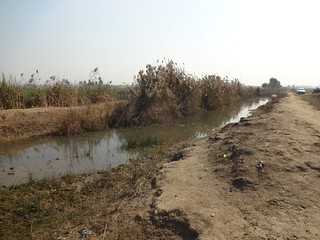 A network of drains has been built over the years to remove excess water but this step has only turned counter-productive. Influential farmers bribed officials to ensure that the drains didn't pass through their fields as that would have bifurcated their lands.

The maintenance of the drains has also been shoddy as was evident during the last monsoon when the villages saw unprecedented flooding. With the drains blocked, groundwater levels rose and the land lost its capacity to absorb and retain water. At Udekaran village, 3,000 acres of paddy crop was damaged and several families moved out of their houses. 70% of neighbouring Haraj village was under water.

The state government is now considering realigning these drains and even constructing new ones. Creating subsurface drainage systems is another concept that has worked for some areas. It involves the laying of drain pipes underground, which will take water to various wells using gravity. Motor pumps help lift this water from wells and throw them into already exising surface drains. This has worked well for areas with good and functional drains.

When experts from the Central Water Commission visited the area after monsoons, they recommended drastic steps like charging farmers for canal water usage, which will help check wastage. But the state government is not willing to accept that fearing the impact this would have on the vote bank. The Centre has recently approved a Rs. 2,246 crore project for the re-lining of feeder canals and the improvement of the drainage network in waterlogged areas. The state has to bear 25% of the project cost.

No fish to fry

The state government has also been advised to promote aquaculture instead of paddy in severely waterlogged areas. However, it's not such an easy option for farmers who are already in debt. Radhekishan, for example, is skeptical whether he would even be able to sustain it. “Even after the government subsidy, we have to invest Rs. 1.25 lakh per acre for fish farms besides annual maintenance costs. How can I take this further,” he asks. 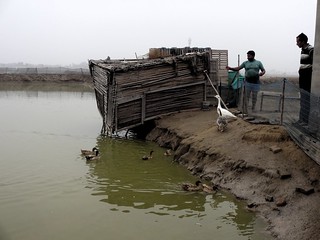 Dr Asha Dhawan, Dean, College of Fisheries at GADVASU, agrees that saline water is a big issue when it comes to fisheries. “We are experimenting with saline water varieties and hopefully will be able to offer a solution soon. Meanwhile, prawn varieties for saline water are available and highly successful,” she informs.

However, prawn farming is not as easy as is being suggested. Manjit Singh Sandhu, who tried prawn farming in Muktsar, says that they are difficult to net and that the pond has to be emptied of water to catch the full lot. “In addition, there’s no marketing infrastructure to sell prawns, it's feed is costly and seeds are not easily available,” he adds.

The cost further escalates when one looks at the bigger issue of water availability. Inland fish varieties breed in fresh water while the groundwater in this area is highly saline. The few fish ponds currently operational are transporting groundwater from areas near the canals, which is of good quality. Atmaram, who has constructed two ponds at his own cost in Shajrana, earns Rs 1 lakh annually. But he spent Rs 7 lakh to lay the 2.5 km pipeline for water supply.

“The Fisheries Department is asking us to expand the area under fish farming. They are giving a subsidy of Rs 1 lakh per acre but from where are we supposed to get good quality water to breed fish? The water has to be changed every 2-3 months or the fish would die,” he explains.

While sourcing of fresh water is an issue, disposal of used water is an even bigger headache. In a water-logged area, where can the water be released? Atma Ram and Radhe Kishan are lucky to have an old village pond adjacent to their lands where the used water is dumped but this means not everybody can afford to even make a fish pond out of their waterlogged fields without sufficient infrastructure and money.

Many options, no solution

Four months ago, farmers planted eucalyptus saplings distributed by authorities to draw out surplus groundwater. In addition, a new method of plantation, which involves the construction of an elevated ridge to prevent contaminated groundwater from reaching the roots, is also being practised. The Forest Department has been watering the saplings through tankers but it’s difficult to escape the elements. The method has worked well at some places but at many others the saplings did not survive the high salinity.

A multiple well point system has also been proposed for areas where the groundwater consists of a layer of fresh water from the canal floating over the saline water. At Golawala village, where Punjab Agriculture University did experiments on this model in mid 1980s, farmers deflate the claims. “This can only be done in areas adjacent to the canal and are not possible to replicate all over the affected region. Our village got rid of waterlogging not because of this method but because the water drained out naturally towards the Southwest,” says Mill Singh

Geography, not canals, is the problem

The region is not what it used to be pre-1950s. Two generations have grown up with canals criss crossing through the area. This is why they don't feel that there is anything wrong with constructing canals. Instead they blame the geography.

“Our area is low-lying, which is why we have excess water. The fields on the upper side get a good harvest and that has only been possible due to the canal network since groundwater is unusable. If there is seepage from the canals, the authorities should plug them,” says Gurmeet Singh of Ratta Khera village.

Drinking water supply from the canal has been a blessing since the groundwater here has always been brackish. So between the devil and the deep sea, the choice has already been made. And since it's the government that does the choosing, the people here are at the mercy—of nature and man.