When wetlands refuse to wilt away

Seetha Gopalakrishnan
19 Mar, 2017 . 6 mins read
The revival of Narayanapuram wetland is a fitting example that good things can come out of government’s willingness to associate with independent organisations for the betterment of the society.

Once home to over 400 water bodies, Chennai’s development story is similar to most metropolises across India. Urbanising at a hurried pace, the concrete city spilled over its waterways and wetlands, leaving behind a sorry tale of ecological destruction. The Narayanapuram wetland, part of the massive Pallikaranai marshland, which was recently taken up for restoration, shows that not all hope is lost; not yet, at least.

The Pallikaranai marshland complex is essentially a consolidation of 16 interconnected, cascading wetlands. As part of their almost two-decade-long research and study of the marsh, Chennai-based Care Earth Trust estimates that its integrity is sustained by a subterranean freshwater aquifer cutting across the southwesterly direction. Care Earth had evaluated that the Pallikaranai marshland had shrunk from its original spread of 6000 hectares in the 1960s to a paltry 593 hectares in the early 2000s.

The Narayanapuram lake, a part of this larger landscape, is among the most violated wetland complexes within the Greater Chennai Corporation limits, thanks to the rampant infrastructure development and the IT boom.

The Narayanapuram wetland holds water all year long and not just during the monsoon months. Originally spread over 64 acres, it had an ayacut (area irrigated by the lake) of close to 350 hectares. Despite agriculture giving way to rising urban sprawl, less than one percent of its area was encroached upon in 2002. By 2015, encroachments ate away close to 10.5 acres from the lake’s total water spread area. The Thoraipakkam-Pallavaram Radial Road cuts through the lake, splitting it into two. This, along with flagrant incursions, especially on the northern portion, has severely restricted water flow from the neighbouring Keelkattalai eri and Pallavaram periya eri. 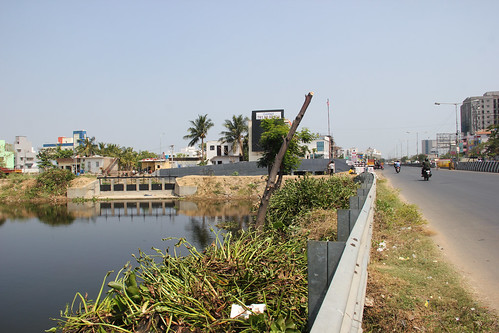 Care Earth Trustee Jayshree Vencatesan blames it mostly on the lack of understanding about the usefulness of wetlands in the urban context, especially marshlands’ crucial role as flood regulators and local biodiversity hotspots. The land carved out of the lake now houses residential plots and towering apartment complexes, all of which get flooded without fail after every shower. “The Narayanapuram wetland was so severely compromised that it was the first waterbody to breach in the Pallikaranai complex during the 2015 floods. The bunds were not strong enough and encroachments all around only increased the severity and the risk of the bund breach,” adds Jayshree.

Care Earth, with the consent of the Public Works Department (PWD), with whom administrative responsibilities relating to the wetland rest, drew up a restoration plan to salvage the Narayanapuram wetland from further deterioration. Multinational company VA Tech WABAG supported the project financially as part of its corporate social responsibility (CSR) activity.

Lack of proper sewerage facilities is a huge concern for most of Chennai’s southern suburbs and Pallikaranai is no exception. Systematic analyses of water samples from Narayanapuram revealed elevated chemical and biological oxygen demand (COD and BOD) with the concentrations of nutrients in the form of nitrogen, phosphorus and ammonia much higher than acceptable levels.

“The Narayanapuram wetland was designed to receive overflow from the nearby Pallavaram, Kolathur and Keelkatalai eri. Water from ponds close by also reach the lake. But since most of the plain areas have been encroached upon, the flow has been affected a great deal. In addition, an analysis of the lake water sample revealed high nutrient concentrations, indicating the presence of domestic sewage contamination. This is because sewage from the houses in the neighbourhood is systematically let out into the lake, turning it into a stinking ditch,” mentions project coordinator S. Vasantha Raja from Care Earth. The organisation has sought the corporation’s help on the issue and expects sewage outfalls to be plugged soon.

In addition, around 65 percent of the lake’s water spread area was colonised by invasive water hyacinths. Invasive weeds and naturalised species such as seemai karuvelam (Prosopis juliflora) and erukkam (Calotropis gigantea) were aplenty along the tank bund as well as in dry spots within the lake. Locals were actively involved in the clean-up; few wielded catamarans to remove hyacinths from the lake while many helped cut down the overgrown weeds and invasive bushes. Later, the corporation chipped in with mechanised excavators to help remove hyacinth from the waterbody. 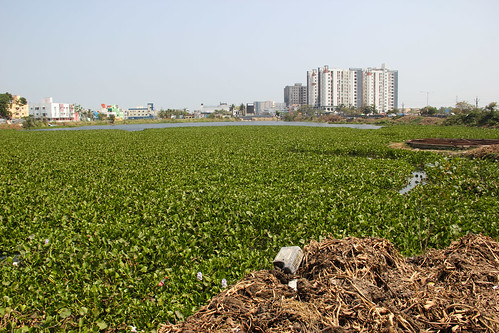 Once the waterbody was deepened and the lake bund strengthened using the excavated earth, the next task was to populate the bund with vegetation. Trees are usually planted along the water bodies to strengthen the bunds and prevent soil erosion. Plant ecologist Muthu Karthick explains that indigenous, local plant species were chosen. “An assortment of tree species, best suited to be planted along lake edges were picked. This included neer marudhu (Arjun tree), malai vembu (Indian lilac), pungai (Indian beech), iluppai (Mahua or butter tree) in addition to bamboo and three species of native woody Ficus.”

While clearing out biotic intrusions is rather easy, getting rid of concrete encroachments is not as straightforward. Despite severe encroachments, water manages to flow from the neighbouring water bodies into the lake. “The PWD has intervened in a big way to ensure the water flows out of each of the lakes to prevent a 2015-like flooding event in future. Despite encroachments, water now reaches Narayanapuram from Madipakkam and Pallavaram before draining out into the Pallikaranai marsh and eventually the Bay of Bengal through the Okkiyam Maduvu,” clarifies Jayshree. As an extension of the project, works will soon be initiated to restore link channels between Keelkattalai and Narayanapuram wetlands to Pallikaranai marsh. Efforts are on to secure the wetland’s periphery to prevent further encroachments.

Poor understanding of drainage patterns is the root of all bad planning. A proper zonation policy which defends and safeguards ecosystems and the services they provide is the need of the hour. Unless wetlands are categorised as critical systems providing significant ecosystem services from storing rainwater to groundwater recharge and flood control, they will continue to be perceived as wastelands, both by the administration as well as general public.

The Narayanapuram restoration is an excellent example of leveraging public-corporate-NGO partnership to improve local ecology. To inculcate a sense of local ownership and responsibility, Care Earth had organised training on the benefits of wetland conservation targeted at local residents prior to project commencement. While a larger federation for the protection of the Pallikaranai marsh already exists, Vasanth informs that local residents are slowly being organised into custodian groups to help keep the Narayanapuram wetland free from pollution and further encroachments.

“Stereotyping of NGOs as organisations fit just for creating awareness or filing public interest litigations need to be done away with. When the administration reposes its confidence in non-governmental organisations with a grounding in science and civil society, great things can be achieved,” insists Jayshree. And the Narayanapuram experiment serves as a fitting validation of Jayshree’s statement.

Click here to view more photos of the Narayanapuram wetland