Amita Bhaduri
05 Sep, 2014 . 6 mins read
A community drive to revive wells in Mokhla talab near Udaipur results in water security for longer periods of time as well as making leaders out of women.

The name of a place can tell one much about its history. Take Mokla talab, a village 62 km southeast of Udaipur for example. Mokla means sufficient in Rajasthani and talab means pond. The village was named after its overflowing talab. But what happens when the talaab is overflowing no more? The name stays the same but the condition of those who live there, sadly, doesn't.

Sumitra, a resident who belongs to the Meena Rawat tribe, explains the situation. "Teesre sukho, aathwe akaal’ (a drought in three years and famine every eight years) is a familiar saying in the village. For generations, traditional talabs and shallow wells have been an important source of water for irrigation and human needs in this drought-prone region. Two decades ago, even amidst drought, people depended on naturally occurring groundwater in the shallow wells. The communities had developed informal institutions called ‘kua pariwar’ to build, maintain and share water from these wells. However, with the declining sense of community, the wells have suffered", she says.

Sumitra’s 20 year old well was in a pathetic condition a few years ago. Because of the inflow of mud during rains, the well did not have enough water for irrigation. The absence of a boundary wall around the well rendered it unsafe for children and animals. So she had her children were tasked with fetching water from 3 kilometres away when the well dried up in the summer. The situation only worsened during drought.

Most of the people in Mokla talab depend on rains for agriculture since the land in the hill slopes as well as valleys are unable to produce enough owing to poor soil depth. An alternative is goat rearing, which the Meena Rawat tribals do for a living. However, the rapid shrinking of grazing lands has made it difficult for them to sustain large herds. The income from agriculture and goat rearing added up to less than Rs 15000 per year and was no longer sufficient to feed Sumitra's family. Like most other households, she too was compelled to depend on wage employment for survival. There was no regular work in agriculture and she struggled to make both ends meet. Most of the people here migrated to Udaipur or various places in Gujarat for wage employment. 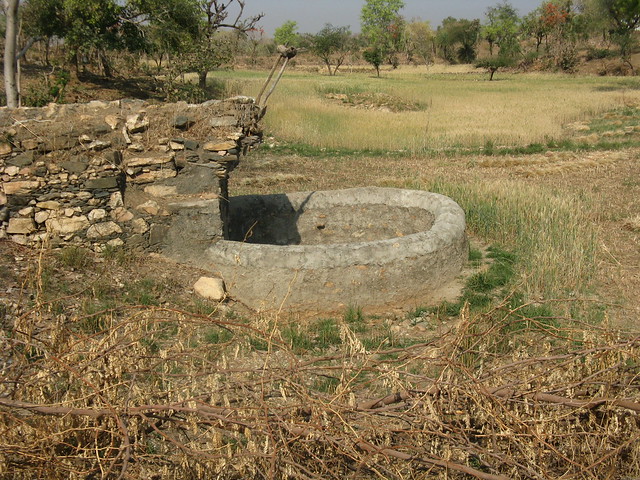 The average annual rainfall in the area is 650 mm and normally most of it is received in just 25 to 30 days in a year between June and September. The river and nallahs flow during the rainy season and water is available up to the month of January. Every monsoon, water from the slopy undulated area was wasted as it raced towards the rivers.

“The people of Mokla talab have seen the troubles recurring droughts, interspersed by extreme rainfall can bring”, Sumitra recounts in her pleasant, down-to-earth manner.

In 2008, the locals began a community drive to revive the wells, with help from Udaipur based NGOs, Prayatna Samiti and Wells from India. The work necessitated small-scale investments of Rs 15000-20000 in well lining, which the locals fell short of.

Field investigation and surveys by a technical agency called Atlas Hydro Geo Tech Consultants, Udaipur, revealed that the village had highly weathered and fractured formations suitable for groundwater recharge. In general, the depth to water levels in the village ranged from between 2 to 20 m, which was considered good. The community came up with the idea of arresting the rainwater so that it percolated into the ground.

To begin with, they constructed bunds, terraces or loose stone check dams on the upper slopes mostly on common pasturelands. These inexpensive, temporary structures have been able to arrest the flow of water and allow it to go underground. This has helped increased the reliability and productivity of crops grown in private lands. 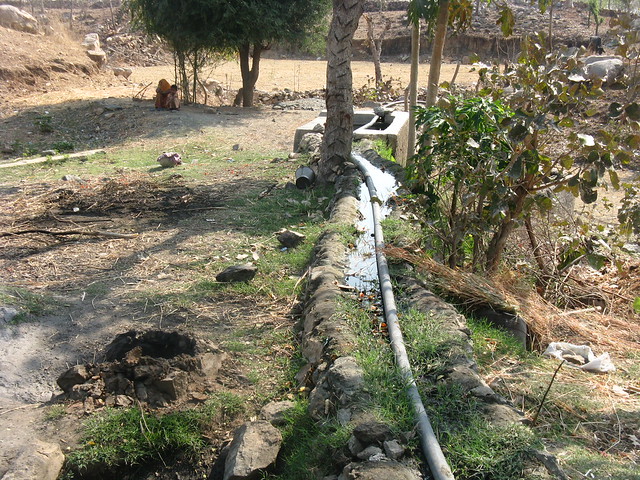 Construction of well lining and provision of pipeline improved the water yields from the wells and water was available for longer periods of time. Farmers were able to time their agricultural operations better and a greater window was available for irrigation. The need for engaging outside labour lessened and time was available for irrigating fallow lands. A farmer can on an average save 7,000 litres of water a day by applying efficient management practices like providing pipelines, according to Sumitra.

It was hard to recreate the old institution of kua pariwar. However, the locals had a plan. They knew that formulating clear understandings on resource management could not be rushed along. So, the work was not just limited to developing assets like wells. It also included creating a savings group that was linked to the banking mechanism. According to the Wells for India Country Director, Mr. Om Sharma, “It is easier to develop these institutions as they are rooted in the improvement of financial access”.

Women self help groups to the rescue

Sumitra recounts that just a decade back the interest rates were very high (60 to 100 per cent) for consumption purposes under the mahajan (informal credit) system prevalent in the area. Agricultural finance too was very costly and traditional moneylenders used to advance loans to farmers in cash or kind at a high rate of interest with a view to securing a portion of their produce. During the harvest period, mahajans would come to these villages and secure a part of the produce of the debtor-agriculturists at a price that was predetermined usually at lower than the normal market rate.

Sumitra took the lead and encouraged the women in her village to set up a savings group to meet their credit needs. The group comprising of 10 women saved Rs 100 on a monthly basis and the savings were provided as a loan to the group members. This had to be repaid with interest in a stipulated period of time. Soon, the interest rates in the informal market declined to 24 per cent as the dependence of these women on informal sources reduced. Access to funds also allowed these women to start income-producing activities like vegetable cultivation.

Sumitra now functions as the Secretary of the savings group. She does the accounting and manages banks and officials with ease. Apart from her own group she has begun managing 8 more SHGs in the sector. She manages the bookkeeping and receives payment from them for her services. She is able to earn over ten thousand rupees a year through this. Her mobility has increased. She senses a greater involvement in decisions in the family and has better access to family income and resources now. 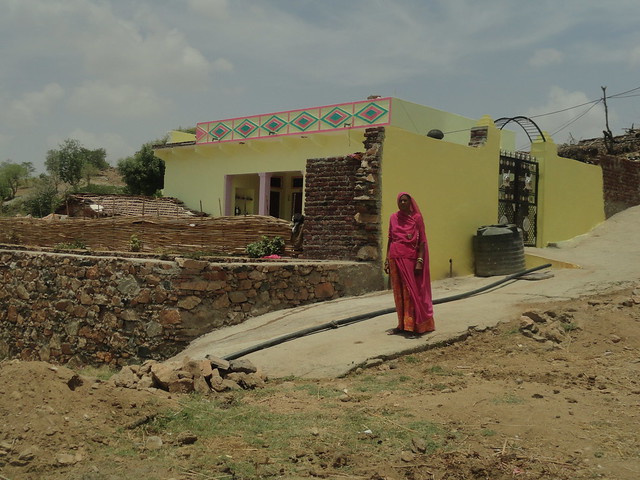 As she talked about the well and how managing the groups changed her life, she beamed with joy. Her group had been linked to Centre for Environment Education’s (CEE) Gramnidhi programme, a community based eco-entrepreneurship initiative towards sustainable development in 2009. Her farm contains vegetable crops that normally do not survive in the dry climate of the area without irrigation. She is one of the farmers who harvested rainwater and revived her well. Her plot now serves as an example for local people who are keen to resurrect their wells.

While the work on well revival is good in terms of both ecological restoration and improving livelihoods, it has led to certain externalities. People are extracting more groundwater. With well revival there is need to have controls on water demand in areas to prevent intensive use of groundwater for agriculture. Else, the impact of Sumitra's and the work of others like her will be quickly annulled by increased exploitation of groundwater.