Seetha Gopalakrishnan
19 Mar, 2014 . 8 mins read
The duo of Sekhar Raghavan and Indukanth Ragade, addicts of water conservation, tell why rainwater harvesting and greywater recycling are important and how they can be implemented at homes.

Chennai is rain-rich, but frequently water starved. The city receives a good amount of rain both from the South-West as well as the North-East monsoon, though the latter’s contribution is much higher. Even with an annual average rainfall of around 1200-1300 mm (the national average is around 800mm), city dwellers face acute water shortage during the summer months. Mismanagement, and not availability is to be blamed.

Armed with a bicycle and a passion to conserve water, Raghavan visited every single house in Besant Nagar and Valmiki Nagar in South Chennai. “Sometimes, people refused to let me inside their houses but that didn’t stop me from going back every weekend”, says Raghavan recollecting his initial activist days. He single-handedly undertook this door to door campaign to raise awareness about rainwater harvesting in the city. With a little help from a friend at a local newspaper Adyar Times, Raghavan was able to gain access to few more houses in the locality.

Over time, people started taking him seriously and came back to him for advice on rainwater harvesting including topics such as the construction of simple percolation pits and recharge wells. 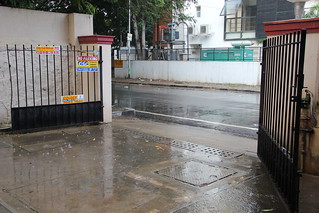 Raghavan was instrumental in setting up the country’s first ‘Rain Centre’ through the Akash Ganga Trust in 2002, with the help of some like-minded friends. The Centre serves as a one-stop-shop for all things relating to rain water harvesting but they don’t stop with just that. A team of trained plumbers help home owners in implementing the structural changes that they require.

Ragade likens groundwater to a bank account. “if we keep drawing from it, at one point it is bound to become empty. Recharging the ground by diverting rainwater into it takes care of maintaining the account balance”, he explains in a simple manner. A lifelong water-conservation addict, he responds to users’ queries on India Water Portal and does not shy away from going the extra mile to send them post cards with his suggestions.

Why should we harvest rainwater?

Rainwater harvesting is done mainly for two reasons – one, to store the water for later use (in lakes, reservoirs or domestic sumps) and two, to recharge the ground.

The 2003 Ordinance which made rainwater harvesting compulsory is one of the best things that ever happened to Chennai. The state government directed all homes, offices and government buildings to install rainwater harvesting structures within their premises. There was a mad rush towards the end as the authorities had threatened to cut off electricity and water supply connections if anyone failed to do so. By the end of the year, most houses and buildings across the city had made some arrangements to catch the rainwater within the plot.

When the Rain Centre conducted a survey to find out how well the structures were implemented, they found that most homeowners had put in place half-baked installations. But, another survey conducted by the same organization found out that something is better than nothing! Post-2003, the groundwater table in the city had risen by 6 meters, a phenomenal achievement by any standard within such a short span.

Chennai’s temple tanks, once used as cricket grounds, are filled to the brim now. These tanks act as huge receptacles for rainwater and help in gradually feeding water underground over time. Unless there is water at very shallow depths, it is impossible to see temple tanks filled with water. If the underground is parched, even if tanker loads of water are filled into these structures, it will drain out in no time. Brimming temple tanks are one of the best indicators of the increase in the city’s groundwater table.

The scope for surface storage is greatly diminished in a city like Chennai where concrete structures are slowly eating into open spaces.  Natural lakes are slowly disappearing and the last reservoir to catch water to cater to the city’s demand was constructed almost sixty years back in Poondi. Not much is known about the actual capacities of the 4 large reservoirs that take care of the city supply after decades of silt accumulation. Hence, storing rainwater underground seems to be the best possible solution. 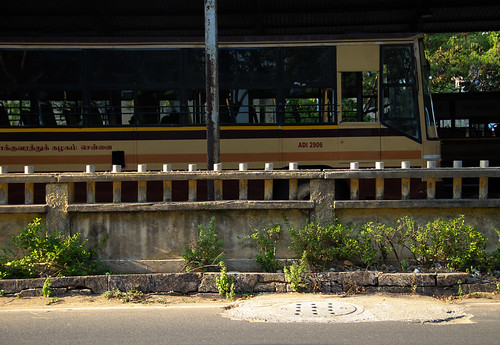 “In a place like Besant Nagar which has sandy soil, all you have to do is just let the rainwater be. It percolates down and recharges the ground. Instead, the government is bent upon taking up large scale projects like the construction of storm water drains across the city, irrespective of whether it will serve the purpose in a particular locality with a particular underground soil profile or not”, Raghavan laments. After months of protesting and petitioning, a determined group of volunteers from the Chennai Rain Centre were able to halt storm water drain constructions in Besant Nagar. Instead, a simple recharge well arrangement was suggested to help in the percolation of rainwater into the soil. The corporation accepted this suggestion and put in place 16 recharge wells surrounding the Besant Nagar Bus Terminus which are intact even today.

Raghavan’s own apartment complex stands testimony to the miraculous effects of rainwater harvesting along the coast. Located just 500 metres from the sea, salinity intrusion had made the well water unpalatable. The apartment complex diverted all rainwater from the terrace as well as paved areas into the open well and also constructed a series of recharge wells. A good downpour in 2005 changed the fate of the region altogether. Besant Nagar’s salinity problems are a thing of the past now and it is very rare to see dry wells in the area any more.

With ever-increasing demand for water in the city, the dependence on deeper sources has soared while good old shallow dug wells are dying a slow death. This is best elicited by the increase in the number of individual bore wells across the city.

Good rains take care of replenishing the shallow sources. Simple diversion of rainwater into open or recharge wells helps in recharging the groundwater at shallow depths. However, the recharge options for deeper sources are rather limited. 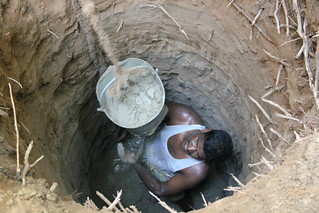 One has to also keep in mind the appropriateness of the designed recharge structure. For example, if one has an 800 ft deep borewell but designs a groundwater recharge structure that goes 15 feet underground, it would not do much to replenish the deeper source.

To recharge a borewell, a pit should be dug around it and filled up with filter media like gravel and pebbles. Instead of the fully closed pipes, slotted pipes which help in transporting the water from the surrounding to greater depths should be provided. Care should be taken to ensure that the filter system is well designed and functional, as any debris that passes through can directly clog up the well as well as the submersible pump lying underground.

Raghavan believes in the ‘conjunctive use of aquifers’ – using open wells in and around the monsoon months when the rain replenishes the shallow water table and when this level goes down as summer draws near, using the deeper bore wells.

Greywater is not waste water

Recycling greywater is not as difficult as it seems. It was earlier practised in most homes but just without the fancy name that is has today.

Water from the kitchen and bathrooms used to be let out in open spaces around the house, irrigating the backyard garden. The kitchen water rich in organics helped boost plant growth and the soil bacteria took care of polishing the water.

The advent of piped sewage disposal has disrupted this cyclical movement of water in which the usable grey water is mixed along with the sewage and sent out of the plots to be partially treated many miles away from the source. Like rainwater harvesting, if the design is incorporated at the construction stages itself, the cost of putting in place these decentralized treatments systems tend to come down drastically.

Simply diverting the grey water into a bed of water loving plants such as Canna, popularly known as kal-vazhai in Tamil, Cyperus (umbrella plant) or Heliconium is the most cost effective way of treating it. The organic as well as the inorganic material in the grey water act as nutrients for the plants. The plants along with the soil microbes take care of polishing the greywater as it moves down through the soil. The treated water can then be diverted into storage tanks and used for flushing of toilets and gardening.

Bath and kitchen refuse water account for close to 50% of the daily water usage at homes. Greywater recycling therefore should go hand in hand with rainwater harvesting in individual homes as well as apartment complexes to reach a considerable level of decentralization in terms of water supply. 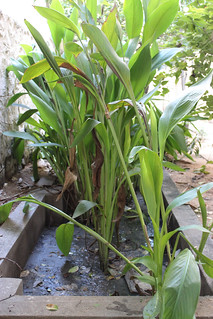 Raghavan and Ragade feel that if rainwater harvesting is to be transformed into a people’s movement, technology should not be a barrier. The design and structures should be kept as clean and simple as possible with scope for improvisation keeping in mind local conditions and space constraints.

If the need for water is decentralized, then why should the sources alone be centralized? Being self-reliant for water has more meaning today than ever before.

Harvesting at the macro level, like construction of check dams and reservoirs is the Governmnet’s business, but a lot remains to be done at the micro level. An effort at harvesting rainwater and recycling greywater at the household level, however small it may be, can go a long way in reducing external dependence.