Rise of tubewells in western UP (Source: DTE)

The theme of this year’s World Water Day was “energy-water nexus”. It was almost as if the topic was chosen keeping Western Uttar Pradesh in mind because the conflict between water and energy users in agriculture and industry has heightened here in the recent past. The area's groundwater has been completely exploited thanks to the swift development of private tubewells for irrigation, which has impacted the power sector too.

On the occassion of World Water Day 2014, an event that tied the two themes together was organised by Neer Foundation, The Institution of Engineers (India), India Water Partnership and India Water Portal at the 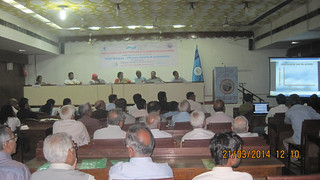 “Water and energy are closely interconnected and choices made in one sector affects the other, positively or negatively”, said C P Gupta, Chairman, The Institution of Engineers (India), Meerut. He also talked about how pricing policies in the two sectors impacted each other. He felt that the Government should move to a slab rate for groundwater extraction in agriculture. The flat rate that farmers are charged for power leaves them no incentive to adopt water conservation practices.

Another important point Gupta stressed on was the need to separate electricity feeders for agriculture and domestic use. Farmers, who made up a large part of the audience, did not take this suggestion too well as they felt that rationalizing power tariffs for agriculture would not work considering the poor returns to farmers in agriculture at present.

The main takeaway was that power tariff adjustments alone are not adequate to resolve this compounding problem since power availability is itself posing a constraint to the rate at which power can be supplied to tubewells. An alternate idea could be to shift from farming for high to low water-requiring crops. This would drastically reduce both energy and water demand that would bring it in line with this year's World Water Day theme.

May 25, 2022
One water, one data
Enabling a culture of data sharing between programs and reuse of data

May 24, 2022
Droughts reduce India's GDP by 5 percent in twenty years
News this fortnight

May 24, 2022
Pond water reuse from a circular economy perspective
Ponds became a storehouse of metal toxicity in the accumulated sludge: Study