Aarti Kelkar- Khambete
17 Nov, 2013 . 4 mins read
In spite of the high rainfall it receives, Mulshi taluka is one of Pune's more agriculturally backward talukas. Can the 'Khachar' system and other local methods change the scenario?

India is one of the world's largest producers of white and brown varieties of paddy and contributes to around 20% of all the paddy production in the world. Rice (de-husked form of paddy) is the staple food in the eastern and southern parts of the country and is mainly grown in rain-fed areas that receive heavy annual rainfall [1].

In Maharashtra, paddy is grown over an area of 14.99 lakh hectares with an annual paddy production of 32.37 lakh tonnes. With an average productivity of 2.01 tonnes per hectare (t/ha), Maharashtra ranks 13th in paddy production in the country [2]. Pune is the second largest district in the state with 14 talukas. Agriculture is one of the most important economic activities in this region with around 40.85% of the population engaged in it [3].

Mulshi taluka is a high rainfall region in Pune district characterised by hilly and undulating topography and less fertile soil. It has the highest percentage of area under paddy cultivation (36.22%) as compared to other talukas [3].

Paddy is cultivated using a unique system of bunding that involves catching the rainwater on lands located at higher levels and then controlling the flow of water from there to lower levels. This method of irrigating the fields, which shapes the land in the form of steps made one after the other, is called the Khachar system, . 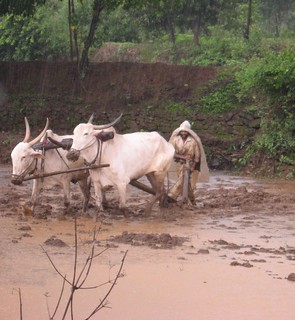 Sowing or broadcasting of the seeds is done before the rains start. The piece of land in the middle is prepared for sowing by burning the leaves and grass to remove any weeds. The land is then ploughed once or twice and seeds are sown just before the first rains begin around April/May. Deep ploughing helps to remove weeds and improves the soil's water holding capacity. It also exposes the eggs of harmful insects and pests to the hot sun.

Water is first collected in the Khachar above this land during the monsoons and then released to this level to irrigate the paddy seedlings. Once the paddy crops grow, water from the top two Khachars is released into the third where the newly grown paddy plants are transplanted. 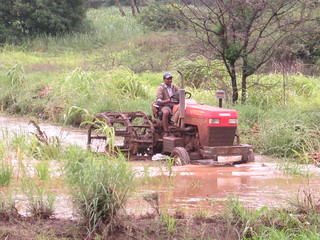 The paddy seedlings require muddy waters to grow. For this, the fields are prepared by a process called puddling where water and soil are thoroughly mixed by using bullock carts or tractors with broad wheels. This smoothens the water and soil into a slurry and also removes unwanted weeds in the soil.

The transplantation process is labour intensive. Hence farmers usually do this activity collectively in groups and move from one farm to the other. During the transplanting, a group of paddy seedlings are plucked and grouped together, joined together by a lump of mud and then firmly planted in the fields. The lump of mud establishes the seedlings in the puddled water and prevents them from flowing away.

Why is Mulshi still agriculturally backward? 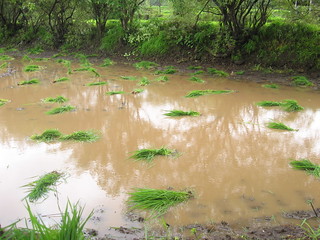 While the surroundings might be lush and green, they hide a number of realities. In spite of the very high rainfall in the region, Mulshi taluka is agriculturally backward when compared to other talukas in Pune district [4].  Paddy is the main rainy crop besides groundnut and vegetables, which are grown in some patches of this taluka. However, Mulshi continues to have poor irrigation facilities and less net sown area with a high percentage of fallow land as compared to other talukas. Rugged topography and medium coarse soils are responsible for this backwardness [4].

Local solutions are best to solve local problems quite often. In Mulshi, most of the agricultural land is rain-fed i.e. is dependent on rainfall for water. Therefore, it is important to improve irrigation facilities.

Agro- forestry, pasture development, horticulture and alternate landuse in these areas can be encouraged. Locals can be encouraged to implement better watershed management and rainwater harvesting practices. Farmers can construct field ponds in their farms to irrigate as well as recharge the groundwater [4].

System of Rice Intensification (SRI), a technique to cultivate paddy that helps increase the yield of rice produced by using minimum quantities of water [5], can be promoted to reduce the amount of water needed for cultivation.

1. Wikipedia (2013) Rice production in India. Downloaded from the site: http://en.wikipedia.org/wiki/Rice_production_in_India on the 12th of August 2013.

2. B. L. Thaware, R. L. Kunkerkar and H. A. Shivade (Date not specified) Status paper on rice in Maharashtra. Downloaded from the site: http://www.rkmp.co.in/sites/default/files/ris/rice-state-wise/Status%20Paper%20on%20Rice%20in%20Maharashtra.pdf on the 3rd September 2013.

4. Patil, Sanjay (2012) Chapter VII: Summary and conclusions. In: Spatio-temporal analysis of agricultural landuse pattern in Pune district.  Thesis downloaded from the site: http://shodhganga.inflibnet.ac.in/handle/10603/5666 on the 12th of August 2013.

5. Wikipedia (2013) System of Rice Intensification. Downloaded from the site: http://en.wikipedia.org/wiki/System_of_Rice_Intensification on the 23rd of September 2013.