Chicu Lokgariwar
08 Jun, 2016 . 7 mins read
The floodplains of Bihar have an excellent natural flood control and irrigation system in place. Why is the government ignoring it at the cost of lives and livelihoods?

A young girl leads her buffaloes in search of water

“When I was a boy, a family and their livestock could feed on just one crop for three years,” says Jugal Mandal of Sakhwar village in Darbhanga district. “For the last five years though, the village fields have been fallow because we have not had water,” he adds.

This statement could come as a surprise to those who associate Bihar with floods. There is so much media attention on the massive and sudden flooding in Bihar that the rivers in Bihar have earned the moniker,  'the sorrow of Bihar'. Though it is the ‘infamous’ Kosi that is often called this, Kamla, too, carries her share of the blame.

The truth, however, is more than what meets the eye.

Kamla, past and present 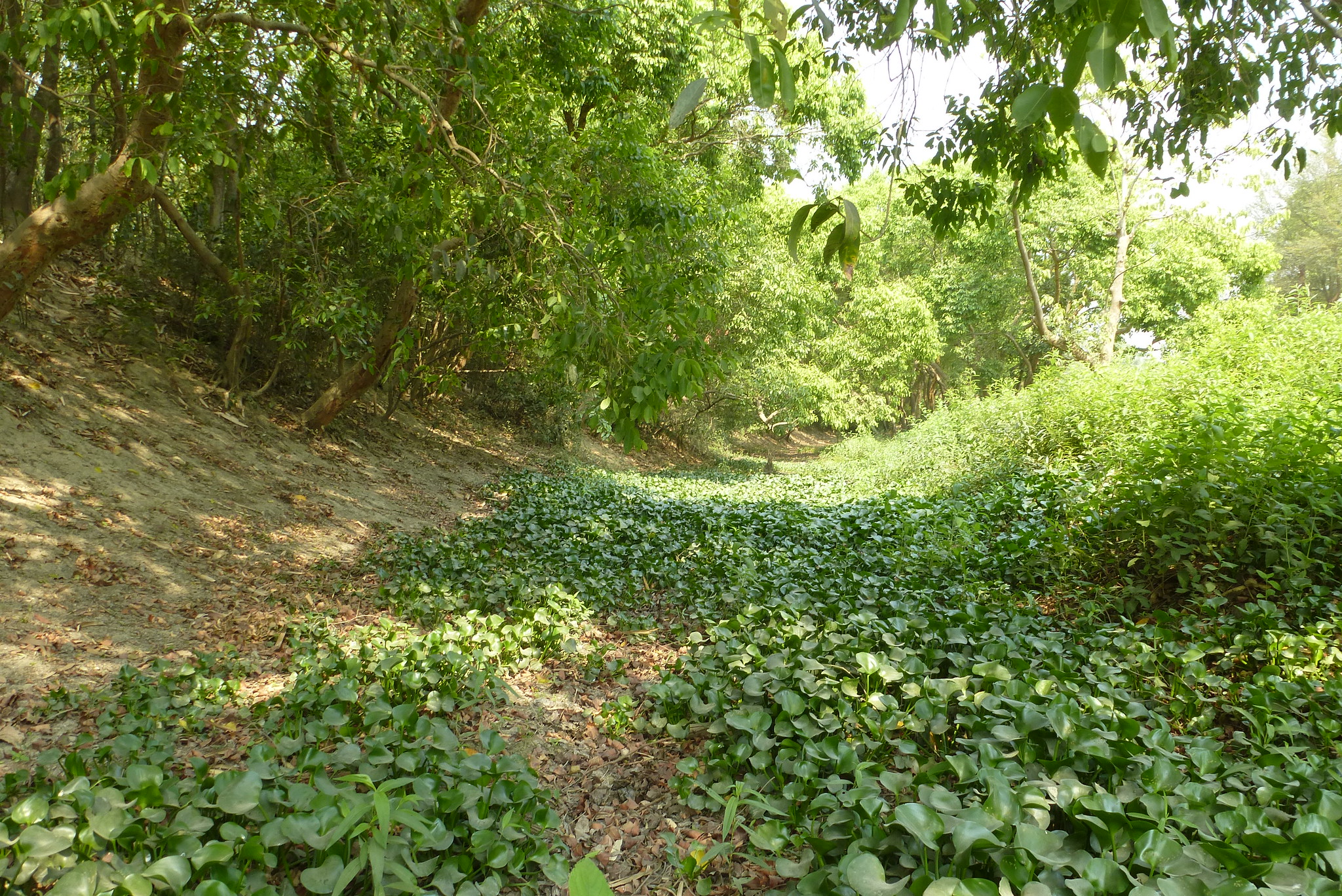 The Kamla river enters India near Jaynagar in Madhubani district in Bihar from Nepal where it originates. By then, it is already a sizeable river, having been met by several tributaries in Nepal. It also has a stream, Bachraja, that takes off from the river.  As a recent development in its course, Kamla, soon after it enters India, joins the Balan river.

Prior to 1954, Bachraja was the main stream of Kamla. In 1954, there was a very severe flood which made Kamla change its course and join Balan, leading to what is now called Kamla Balan. Kamla, referred  by the locals as ‘unmarried ’, thanks to its restless nature,  does this sudden turn in course quite frequently. As a result, the Kamla river basin is criss-crossed with a number of old channels which are empty now. Authors Dinesh Kumar Mishra in his book, 'Kamala: river and people on a collision course' and Havaldar Tripathi in  'Bihar ki Nadiyan- Aithihasik evam Sanskrutik Sarvekshan' have mentioned five channels of the Kamla, including the present one.

The history of floods
Kamla floods regularly in monsoon. The traditional system of interconnected village tanks and chaurs or wetlands has long sponged up the worst of the floods. This role was shared by the paleo channels. Gajanan Mishra, Joint Secretary of Bihar Water Resources Department, terms these water bodies, ‘detention spaces’ that take in the initial surge of the flood water. The spread of the river water over the land would also replenish the fertile soil. Mandal, while talking of his farms, says, “In my childhood, there was no need to use the plough. All you needed to do was broadcast the seed and then harvest a bumper crop. Now everything has changed.”

Simultaneous flood and drought
It is Kamla which has changed. The construction of embankments in the mid-1960s cut off the links the river had with the paleo channels and the chaur-pond system. This had two direct, but contrasting, impacts.

First, the embankments increased the intensity of the floods for those living within them. According to Gajanan Mishra, “The ground level within the embankments of Kamla-Balan as well as the bed levels of the river are rising, resulting in higher stages of flood, even with comparatively lower discharge. It was 52.73 meters at Jhanjharpur for 1600 cumec discharge in 1987, while the flood level was only 50.42 meters for 1964 cumec discharge in 1966.” This increases both the intensity of the floods for a given discharge as also the vulnerability of the embankments. The breaches that occurred in the embankments also led to intense floods in the surrounding areas. On the other hand, the traditional 'detention spaces' were bereft of water, leading to crop failure in those villages. 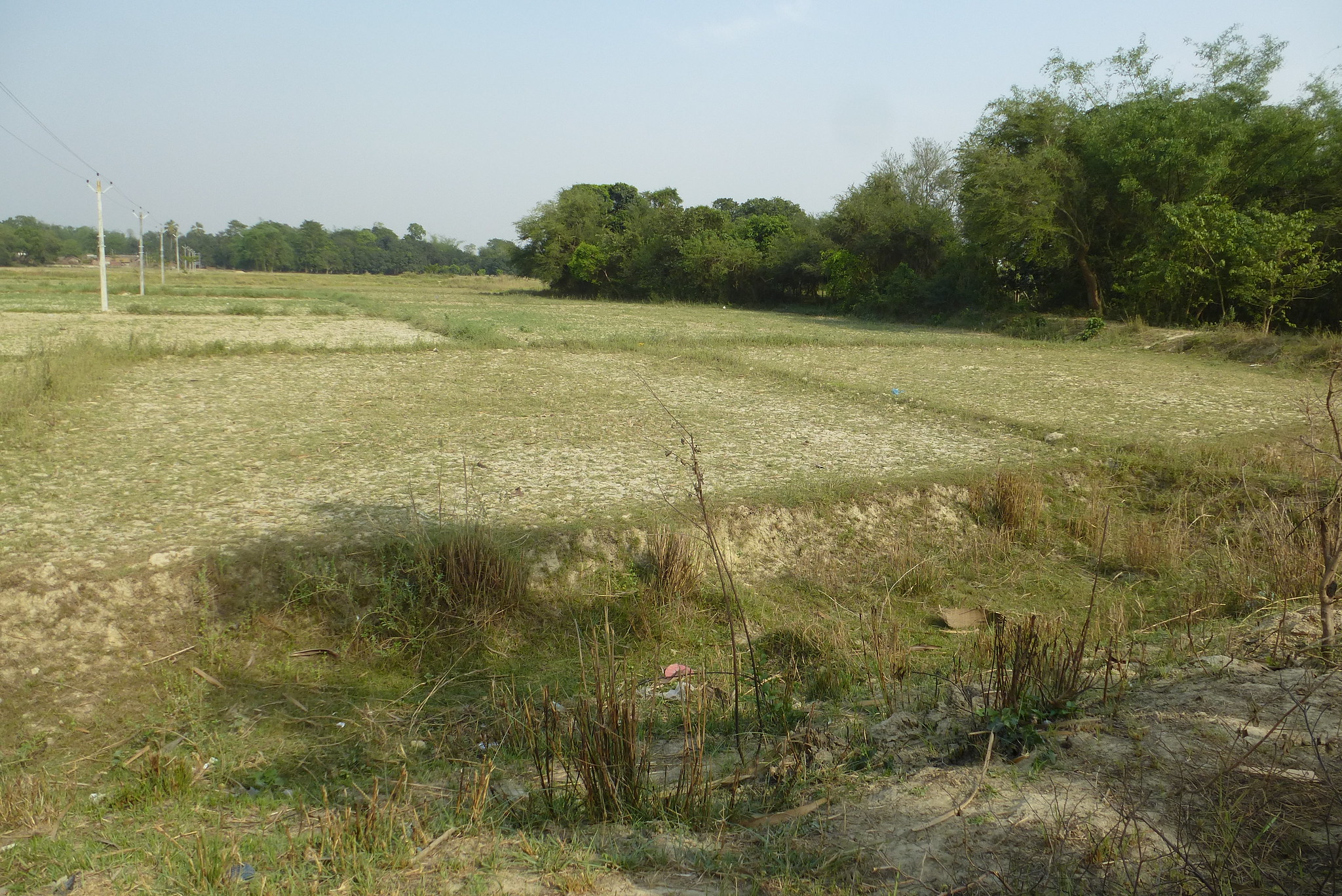 This lack of irrigation water was lamented by people all along Kamla’s paleo channels--the Jiwach Kamla, Sakri Kamla, Patghat Kamla, and Bachraja Dhar. The residents of the Sakhwar village would grow three lush crops a year. Since the 1990s, however, they have only managed one poor crop in the monsoon. This year, several fields lie fallow. This has also had a significant impact on the fish species. The chaurs and the ponds are important habitats of fish and other aquatic species, which are used to fresh water and nutrients that get replenished regularly. Now, they are reduced to stagnant pools.

Livestock herding, especially buffaloes, used to be a major source of supplementary income for the people here. The presence of water in the chaur-pond systems as well as in the many old channels of Kamla meant that the buffalo herders from as far as Jharkhand would migrate to the Kamla basin in the summer. With the embankments, and the subsequent drying out of the old channels, this has changed. Most of the farmers in Darbhanga and Madhubani districts are struggling to find water for their buffaloes to bathe in the summer afternoon. The inability to do this results in the buffaloes falling ill, sometimes fatally.

Unable to maintain the livestock or to provide protective irrigation for their crops, many villagers are left with no option but to migrate.

This dearth of irrigation is despite the ambitious Kosi irrigation project. Built at a cost of Rs 105 crores, the eastern canal was damaged in the floods in 2008 and is now defunct. The construction of the western canal, that is estimated to cost Rs 1307.21 crore (Indian portion only), began in 1971 but is yet to be completed.

What is the solution? 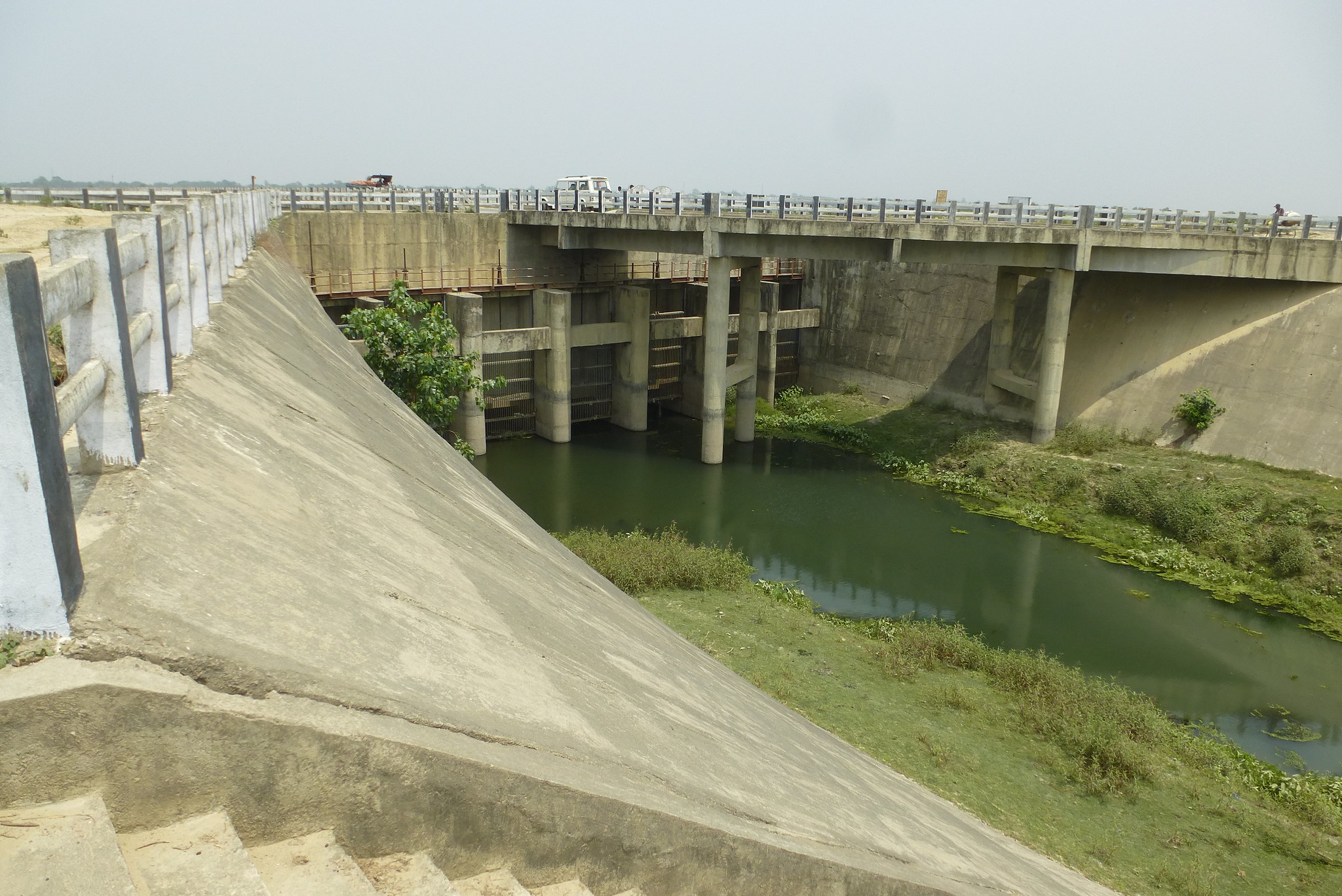 Narayanjee Chaudhary of Mithila Gram Vikas Parishad proposes that the embankments be linked again to the paleo channels. This, confirmed an engineer of Bihar Water Resources Department, can be done using sluice gates at the embankments. Chaudhary is not alone in proposing this intervention. The idea of using older channels as a flood-mitigation strategy has a long and venerable history. It was first proposed in 1941 by the then executive engineer of PWD Bihar, Rai Bahadur Prafulla Chandra Ghosh in his report, ’Comprehensive Treatise on north Bihar flood problem’. He suggested that the floodwaters of Kosi be diverted into the old channels, thus lessening the load on any one stream. According to Dinesh Kumar Mishra, this solution was proposed by Ganga Flood Control Commission, Government of India as well in 1991 in 'A report on Performance Evaluation of Embankment Scheme on both banks of River Kamla Balan'.

What does this entail? First, the existing chaur-pond networks need to be revived. This will include desilting both the water bodies as well as interlinking the channels. Then, sluice gates need to be constructed in the embankments that will reconnect Kamla Balan to its old channels at the point of diversion. Once this is done, floodwaters can be diverted into these water bodies. If one considers that there are four such paleo channels with a total length of 800 kilometers, then it is conceivable that this system can absorb at least four times the magnitude of the normal flow of Kamla.
This is the system conceived and supported by the past and present engineers and thinkers of Bihar. 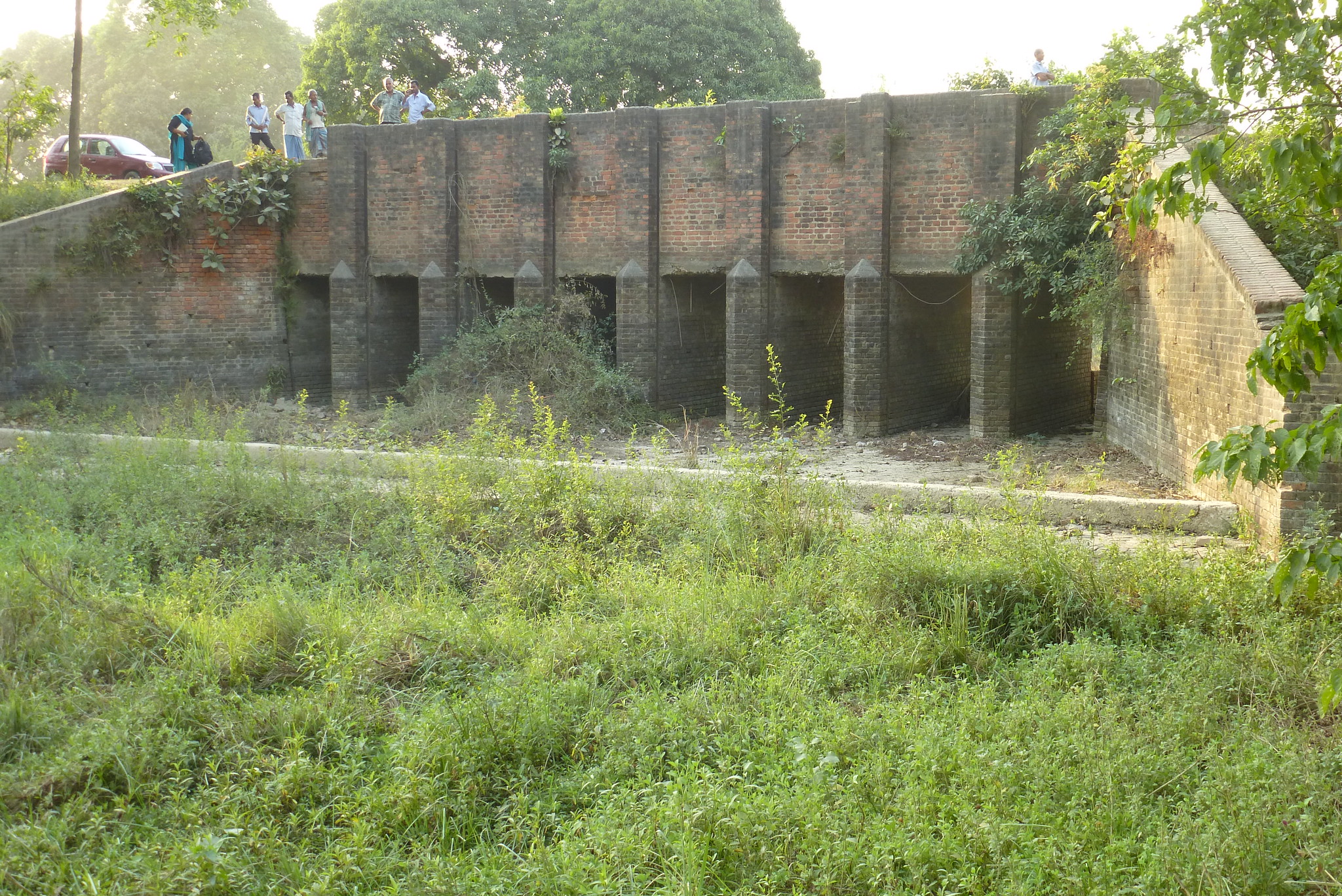 Ram Dinesh Yadav, a farmer in Inarva village near Khajauli proposed a refinement to this plan. His farm is a scant 400 metres from the Western Kosi Canal, but his fields still lie fallow due to lack of water. “If there is a system of small check dams in the old channels of the river,” says Yadav, “the flood waters can be retained for at least a season and this will allow us to have the Rabi crop.” This is technically feasible and can probably be financed through funds from MGNREGA (The Mahatma Gandhi  National Rural Employment Guarantee Act) or the zilla parishad. Once the desilting and the sluice gate system are set up, there is no reason why Kamla's paleo channels cannot provide protective irrigation for the fields.

This is not about inter-linking rivers. All the old streams are not only part of the same basin, but the connections also already exist. The natural connections between the river's present stream and its older channels have been artificially disrupted, and it is now a matter of finding ways to restore them. Thus, it is not a case of 'controlled flooding'; it is giving the river enough room to flow into its natural streams without compelling it to carve out a new path by breaching the embankments.

The impact of flood control
Flood control is the major benefit obtained by reconnecting the paleo-channel network of Kamla to the main stream. The second benefit, no less important, is that of irrigation.

Presently, the embankments and the overall neglect of the river have destroyed the natural connection of the Kamla-Balan main stream with its earlier channels. This means that villages and the fields that were once on the banks of a perennial river are now deprived of even the monsoon flow. Restoring this network will enable them to at least practise protective irrigation and maintain livestock.

According to Chaudhary, the canals of the Kosi system are built on productive farmland. At present, they are not fully functional, which means that the loss of fertile land cannot even be justified by irrigation. At the same time, fully adequate water channels already exist. Since people settled by the banks of rivers, their fields are still based along these paleo channels. Thus, if water is let into these, there is no need for a distribution network, which would prove to be a major saving for the government exchequer. Besides this, restoring the chaur-pond networks will also restore the ecosystems for these water bodies to sustain.