Chicu Lokgariwar
09 Aug, 2013 . 7 mins read
The turtle hatchery at Sarnath was created to reintroduce scavenger turtles into the Ganga to rid it of corpses. However, the seemingly smart program is far from successful. What happens next?

Juvenile turtles at the Sarnath Sanctuary

Rajkumar needs no urging to talk about Sundari. She is evidently a favourite of his. When we met, he regaled me with stories of her beauty, her smartness and her incredibly sweet nature. When he finally brought her out to meet me, I failed to see any signs of a winning personality or of towering intelligence. "Well," I rebuked myself, "you've only met her for two minutes. Rajkumar knows her since she was an egg."

The Sarnath turtle hatchery is an interesting place. It is one of two hatcheries in Uttar Pradesh (the other is in Kukrail, Lucknow district). Every year, between 7,000  and 15,000 eggs are taken from the turtles' nesting places on the banks of the Chambal river (that flows through MP and Rajasthan before meeting the Yamuna in UP) and brought to these hatcheries. The reason for this abduction is simple. The turtles are raised here until they are ready to go and do their job - the job of scavenging on dead bodies floating in the Ganga! 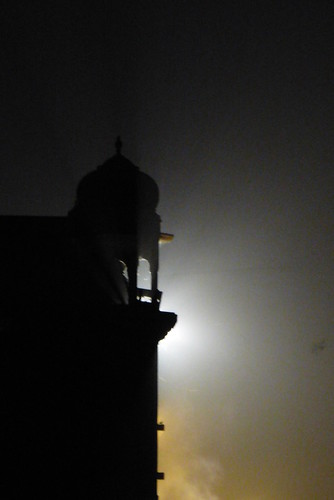 It all began in 1987, when the National Ganga Action Plan was created. At the time, the authorities recognised that the pollution caused by corpses in the river wasn't as bad as that caused by an indiscriminate amount of sewage dumping. Yet, the nuisance value of these half-burnt corpses around the famed cremation ghats of Varanasi and Allahabad was very great.

The solution offered - scavenger turtles -seemed simple and harmless because those turtle species had made the Ganga their home. Over the decades, however, excessive hunting and pollution saw a decline of these species. Of the 12 species found in the Ganga, only 4 are considered to be at low risk as per IUCN; the others are threatened, vulnerable or endangered (Rao, RJ). This drop in numbers meant that there was nothing around to dispose off the animal and human corpses thrown into the river - a fact that I can attest to. I was walking along the river at Varanasi and saw a number of crows bobbing on what I thought was a buoy. It was only when I zoomed into the scene that I realised that they were sitting on a corpse that had washed up on the bank - not a pretty sight before breakfast, or indeed at any time. Similar such experiences convinced the authorities to reintroduce these turtles into the Ganga. 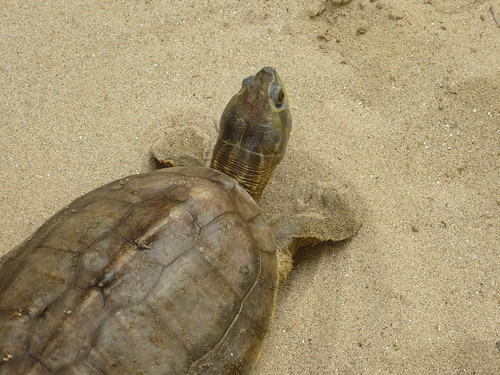 Since there weren't any turtle nesting sites close to Varanasi, it was decided to bring in the eggs from the Chambal river. Between 1987 and 1993, the Forest Department brought a staggering 84,280 of turtle eggs here. The process then as now is that these eggs are hatched and reared till they turn a year old. Then, they are released into the Ganga at the Kachua Sanctuary near Varanasi. Weak hatchlings are kept for an additional six months till they are judged strong enough to endure the wild. Sundari, still living in the sanctuary at 2 years of age, is an exception to the rule because she managed to walk her way into her keeper's heart! 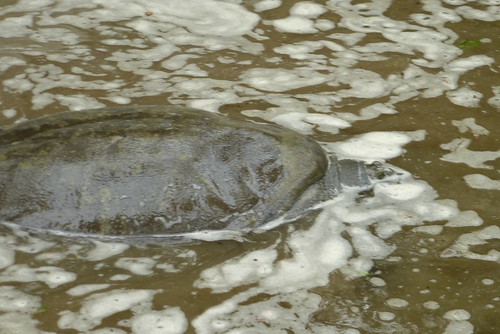 When I visited the Sarnath sanctuary, there were approximately 1000 juveniles of two species - a soft-shelled carnivorous turtle (Chitra Indica) and a hard shelled herbivorous tortoise (Kachua Kachua). The eggs, hatchlings and juvenile turtles were kept in separate, special enclosures that mimiced natural conditions.  The staff of four ensured the turtles' well-being and that they lead a sheltered life in every sense of the word. The cost of the whole enterprise, for the six years of the Ganga Action Plan, was about Rs. 92 lakh.

The hope was that reintroducing the turtles into the Ganges would help establish a self-sustaining population. For this reason, a turtle sanctuary spreading over 7km from Rajghat (Malviya Rail Road Bridge) to Ramnagar Fort near Varanasi was also established. Sand mining and the use of boats was prohibited along this stretch because sandmining destroys the turtles' habitat and nesting sites. They like to burrow into wet sand during the day and to lay their eggs at night. Boats not only pose a danger to the turtles, but also require dredging of sand to maintain a depth. A crucial ban on sand mining also necessitates a ban on boats.

In 1993, the funding to the hatcheries was stopped and the hatcheries themselves were discontinued until 2005. The Forest Department, noticing the continuing decline in several species,  resurrected it to breed endangered turtles. In total, 28,920 turtles were released from Sarnath and an additional 10,088 from Kukrail. From 2005 onwards, an approximate 1000-1500 turtles are released every year into the Ganga.  The logical conclusion is that the river should be teeming with them, right?

Wrong! It only continues to teem with corpses. 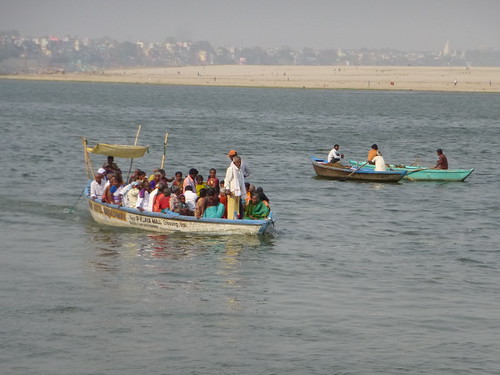 Why? Because it was yet another case of alienation of the people that were most affected by this programme - the boatmen, local fishermen, and even the Public Works Department (PWD) of Uttar Pradesh. The boatmen in Varanasi are vehemently against the sanctuary. They contend that it is only their ferries that are not allowed in that stretch leading to a fall in their income. Larger boats of the Forest Department are allowed to ply (newstrack). Of course, this claim needs verification, but it illustrates the clear lack of communication between the boatmen and the Department. In June 2013, the UP minister of PWD and Irrigation termed the sanctuary a 'hurdle' and submitted a proposal to relocate the turtle sanctuary (Times of India) but this doesn't solve any problem. In fact, it only adds to it.

The immediate problem is that the turtles will be shifted far downstream of the cremation ghats which will seriously affect their ability to 'clean up' the ghats. The larger issue is that this demand by the Minister is illustrative of the attitude towards conservation measures - indifferent at best, hostile at worst. In this case, the Minister sees the sanctuary as an obstacle and sees nothing wrong in saying so. It is a superfluous hurdle to be moved around at will. But once this relocation starts, it will establish that planned construction takes higher priority than exisiting conservation. We can say of the boatmen that 'they don't know the larger picture' but how can we excuse a State Minister's proposal to relocate the sanctuary?

This alienation of the locals exhibits itself in other ways too. Poaching, which has always existed in some form has gotten much worse. Turtles are caught and sold as far as Calcutta and Bangladesh for their meat. Each 'consignment' can have more than 1500 turtles (Times of India). It almost seems as if this whole project has created a situation where the Forest Department is aiding the poachers by bringing in eggs from the Chambal, rearing them for a year or more using taxpayer's money, and delivering them to the poachers. Is this acceptable?

There is also absolutely no interest in the impact of this decade-long enterprise. No turtles have been marked for identification, no annual census is taken. I spoke about this to the officials there. They agreed with me about the need for establishing impact. In fact, they were wistful when they spoke of it. 'It will be nice,' said Kailash, 'to see how far our turtles have reached'. They deserve to know this. The four of them at the sanctuary were knowledgeable, welcoming and competent men. They deserved to be part of the larger project and work towards ensuring its success, rather then be confined to working on just a small part of it. But also, being with the Forest Department, they were resigned to working on the basis of arbitrary orders.

What next? Clearly, one of two things needs to happen. One option is to simply cut our losses, and focus on maintaining the turtle population in the Chambal river. The funds that are currently being used for this state-sponsored trafficking can be directed towards searching for and protecting any established population of turtles in the Ganga. The second option is to continue the import of turtle eggs, but also begin an intensive drive to educate people and to measure the impact of the turtle release.

Which of these two options do you prefer? Is there any other way to improve this project? Do you know of any other means of tackling the twin problems of proliferating corpses and dying turtles?