Tug of war on the Gomti

Chicu Lokgariwar
29 Aug, 2013 . 7 mins read
A river, which once unified people, is now being manipulated in the name of 'river conservation'. All it is, is an excuse to create a divide and further caste conflict.

Gomat Taal is reputedly the source of the Gomti

As temple tanks go, this one is quite beautiful. It is a rectangular masonry-lined tank, about the size of a badminton court. Brick steps lead down to the water. On one of its longer sides is a lovely old temple, shaded by mango trees. Groups of men and women sit and gossip in the coolness. Facing them is an avenue of large trees, below which sit contemplative buffaloes. Behind this meditative group are emerald-green paddy fields. It is a shame that the tank itself is choked with plastic bags, thermocol plates, and water lettuce but the moorhens and egrets don't seem to mind.

Gomat Taal, as this tank  is known, is fed by groundwater and rainfall like most other temple tanks. What distinguishes this tank at Madhotanda, near Pilibhit in Uttar Pradesh from all other such tanks, is the fact that it is the source of the river Gomti. This distinguishing fact is also the trigger for escalating conflict.

I recently visited Madhotanda with Gopal Upadhyay of Lok Bharti, an organisation working to restore the Gomti. The group of men I met there want to ensure 'aviral' flow- uninterrupted flows- in the river by 2020. The first step to doing this is to ensure sufficient overflow from the tank throughout the year. 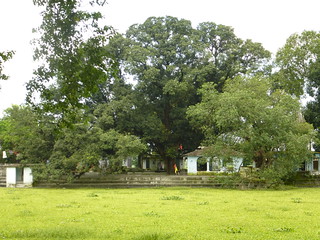 The most reliable and long lasting way of rejuvenating a tank is by a labour of love. It entails a careful stewardship of the catchment area from which the tank receives its water. Dumping of trash, deforestation, excessive groundwater withdrawal and construction all need to be checked in the surroundings. The tank needs to be cleaned of the trash that clogs its bed, and of the waterweeds that choke it.  All of this takes time and continual attention. However, the Gomti Udgham Vikas Samiti (Gomti source development committee) prefers to take a short cut- quite literally. The proposed plan is to increase flows into the tank in two ways:

Both of these are problem-ridden means of increasing flows to a river. 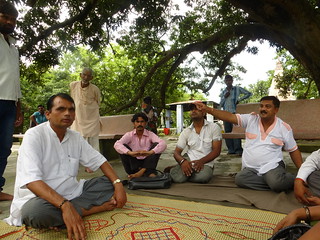 The Sharda flows about 10 km north of Madho Tanda. Tapan Adhikari of the Gomti Udgham Vikas Samiti, defended the plan of bringing in water from the Sharda by saying 'there is more than enough water in the river'. This statement is inaccurate. Rivers and their catchment have evolved together. A river's channel and floodplain (the region / path through which the river flows) have been carved out by the water flowing towards it; at the same time, the living beings in a river have evolved to depend on that amount of water. A river therefore can use, and indeed needs, all the water that flows into it naturally. Therefore, there is no such thing as 'excess' water in the normal course of events. This is true even in the case of a free-flowing river, what to say of the Sharda, which is dammed and at the mercy of occasional releases.

Robbing Peter to pay Paul is never justified. While the devotees of the Gomti might consider it desirable to take water from the Sharda, the donor river itself might have a different opinion- though of course, this opinion is never sought. As of now, the Samiti has constructed the connecting canal but releases from the Sharda are not forthcoming. This is further confirmation that there is no water to spare. 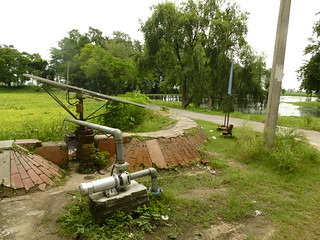 A second intervention is currently being implemented. A 3.5 horsepower (HP) solar-powered pump has been set up just outside the tank. As long as there is enough sunlight, it pumps up water and pours it into the tank about 3 metres away from its outlet. The pump was installed at a cost of Rs. 2.94 lakh by the UP New and Renewable Energy Development Agency. The problem with this instantly gratifying technique of restoring a water body lies in something called a cone of depression. When water is withdrawn from a point- like a tube well- the groundwater levels decline around that point in the form of a cone. With a pump, it is very easy to draw water out of the aquifer at a rate that far exceeds the rate at which water enters the aquifer. This creates a deficit which will soon become near-impossible to fill. This effort at 'restoring the flow' of the tank is thus actually sucking it dry. Gopal confirmed that Lok Bharti does not condone the pumping strategy. But a visiting organisation cannot force its agenda on the local groups. All they can do is advise and discuss.

To understand why, we need to go back about 200 years to that great source of information on all things India, the Imperial Gazetteer of India . According to it, 'for about twelve miles, the river-bed is a mere depression, which dries up in the hot season' (Imperial Gazetteer of India, v. 12, p. 385). This indicates then, that even in its natural state the Gomti did not have the status of a well-defined and perennial river till it met its first major tributary. This is not surprising in the case of a spring-fed stream that flows in the deep silt of the Gangetic plains. The small quantity of water that emerges from the spring gets quickly absorbed by the deep silt and sand bed - a process not unlike spilling water on the beach. 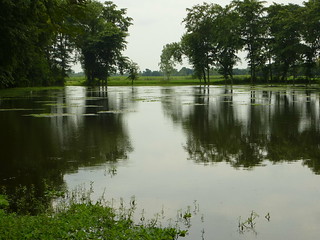 The Gazetteer is not the only source of information on the rivers and forests of India. Oral history and the Puranas are an accurate treasure trove of information on the course, flows, and seasonality of rivers. Jagmohan Prajapati, the pujari of the temple, narrated the story of the origin of the Gomti. In the course of this narration, he said that the Gomti was cursed to hide for 12 kos (approximately 20 km). This is a reliable indication of the nature of the river near its origin.

Environmental processes have evolved around this seasonal nature of the river. Plants, animals, and humans all have centred their lives around the coquettish, disappearing Gomti. Why then, is there a new push towards creating a perennial river where evidence states none existed before? The motives behind that were revealed when I learned of the further plans for the Gomti.

While in the 19th century the Gomti lost itself in the sand, today it enters paddy fields. The land along the river banks (excluding the river channel) is auctioned off by the village panchayats to farmers for cultivation. A little further away are permanent fields. The Samiti plans to excavate the river channel to a width of 30 metres. They also plan to construct 10m wide embankments on either side of this excavated channel.
When I spoke about the dangers of this excavation and embankment strategy citing examples from the Kosi, my concerns were dismissed. There is no harm in creating a channel, I was told.

It is when I spoke of the fact that the fields will be lost and the farmers will lose their livelihood, that the hidden conflicts came into view.  These fields are tilled by two groups of people. Poor subsistence farmers, and Sikhs who moved here during the Partition. Both these communities are looked on with suspicion 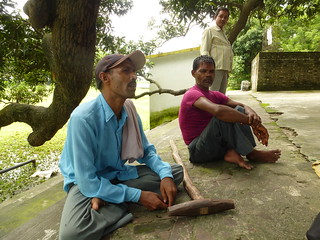 and resentment by the politically powerful, 'upper-caste' members of the Gomti Udgham Vikas Samiti. During the discussion that followed, it became clear that the plan was both born of, and was fostering, a deep divide between these groups. While the pro-excavation group is definitely more powerful and better connected, there is resentment on both sides. In this battle too, Goliath received a setback when the farmers successfully brought a stay order against the excavation plan. What will happen next remains to be seen. In the meantime, it saddens me that the work of protecting a river, which was once a unifier of communities, is now being manipulated to widen the divide and increase caste and class oppression.

That night, I stayed at Vinoba Seva Ashram at Barata, a few kilometers downstream of Madhotanda. I spoke with Ramesh Bhaiyya (as he is known to the world) and discussed Gomat Taal , the origin of the Gomti. It was not the origin, he informed me. Just a few years ago, a small pond on the other side of the village, a kilometer away from the temple, was regarded as the origin of the river. It was an unassuming pond, without any construction around it and without anything to mark it as the origin of the Gomti. Anything that is, except the knowledge, memories, and belief of the villagers that lived there. In the last five years, this recognition has been taken away from the pond. The temple tank was named 'Gomat Taal'. Press releases, letters to the government, and various signboards all proclaimed that it is the temple that is the origin of the river. Today only a few villagers remember the true origin, tomorrow even those memories will be lost.

And that will be the final victory of political agendas over a river.