ARTICLES
Toilets need water, women suffer under ODF drive
Toilets in households have only increased the drudgery of village women as they have to fetch water from faraway sources for toilet use.

Rajasthan is all geared up for the open defecation free (ODF) status well before the national deadline of October 2, 2019. According to the assistant engineer of the nagar parishad, Resha Singh, 4.75 lakh toilets have been constructed since October 2, 2014 in Alwar district which is about to be declared ODF.

Paari, a 45-year-old woman of Ghevron ki dhaani village in the district got a toilet at her household under this toilet construction drive. She does not have to go far away to find a place for her sanitary needs anymore. She is, however, unhappy and exhausted from the numerous trips to the water source she has to make to get water in the toilet. Her feet are aching from treading the path filled with rocks and thorns without any footwear for protection.

Toilets were constructed in the village and a formal verification done by the district and the state. But the water supply in the toilet is the villagers’ burden. She says the Swachh Bharat Mission has only increased her drudgery. “The village has a borewell from where water is fed to the overhead tank and then through piped systems to a standpost. But this water is barely sufficient for drinking. There is hardly any water in the local water sources like open wells and baoli and we have to depend on a tube well far away,” says Paari. 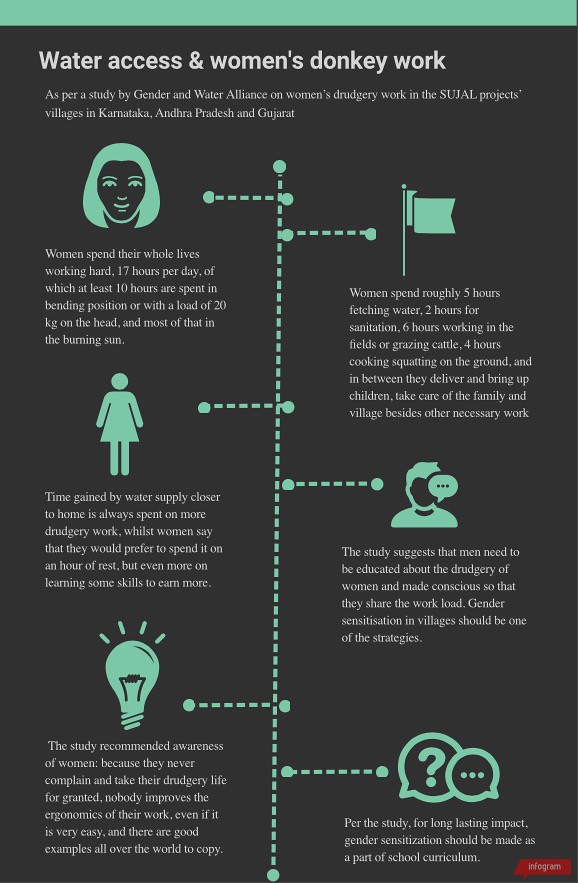 Nestled in the Aravalli hill range near Siliserh lake, Paari's village has a difficult terrain. Earlier, she had to collect water for drinking as the village does not have household piped water supply. Now she has to get water for her newly constructed toilet as well.

Occasionally, men chip in. They collect water for drinking but never for washing, cleaning, sanitation and other domestic purposes. Sustainable Development Goals (SDGs), a set of development goals by the United Nations with the year 2030 as its deadline, recognises this gender inequality influenced by gendered societal norms in water, sanitation and hygiene (WASH).

“Even if India’s target on access to toilets is met, large populations would still have to physically bring water to their homes. A large part of this responsibility is with women and this is likely to increase their drudgery,” says Nitya Jacob, SuSanA India Chapter coordinator while speaking on “Water for sanitation” at an India Sanitation Coalition and SuSanA session at FICCI, New Delhi on April 27, 2018.

Studies by the UNICEF and the WHO (2012) suggest that households rely on women to obtain and carry household water from a source located away from their homes. Fetching water, therefore, remains a significant barrier to household water security and sustainable development, particularly for rural women in the middle- and low-income regions.

A recent World Bank report on water and gender notes how gender inequality in households begin with women having to go through the drudgery in the form of monotonous, back-breaking work. “Where water is not available on premises, women are far more likely to bear the burden of (water) collection globally. In such contexts, they face additional obstacles to participation in schools, workplaces, and other social spaces, and drudgery and physical impact increases,” the report says.

A study on access to water and women’s work in low-income urban areas of the global south by Ben Crow and Jamie Mcpike indicates that women’s lives and income-generating opportunities in poor urban communities are profoundly shaped by their access to water. They face a range of difficulties in collecting water—the time of access, uncertainty and quality of supply, and costs.

“It took us a while to use the toilet as most of us were used to the outdoors. Ours is a twin-pit toilet and we use water from buckets for flushing. We have to use sufficient water to clean our toilets as the unit is near our living space. If we don’t flush it properly, the house will stink. We need at least one bucket of water each time we relieve. We do not have bathing space in our home yet,” says Paari.

Need water tap in my courtyard

“In our village, many men have migrated and we have been left behind to struggle. We do farm work and housework to survive,” says Paari. Even in households where men have not left, the burden of fetching water for drinking and domestic purposes, including water for the cattle, falls on the women.

Surface sources have dried up and women depend on tube wells and most women walk two to three km to get water, each time carrying at least 15 litres of water, doing about five to six trips a day. Queuing up near the source with vessels is common and so are the fights for water. Paari’s daughter also makes trips to the water source with two buckets on her head.

Apart from fetching water, women have to attend to the farm, do household work; on some days do labour under MGNREGA and graze cattle.

A few lucky among them from better off households have hand pumps or tube wells at home and ferro-cement lined tanks for water storage. “Women have to keep the cows and buffaloes clean, bathe them, provide them drinking water, mix their food in water and wash the cattle shed with water regularly. All this requires a lot of water,” says Shanta, the village ASHA (Accredited Social Health Activist) worker of the Primary Health Centre. “Handling all this can lead to high incidence of diseases, so we take care to maintain hygiene,” she adds.

“Luckily, women here have access to LPG, so they do not have to make trips for firewood any more. What they need is better access to water supply at household level for reducing their drudgery from water collection. Only then can the precious time they lose to fetching water from faraway sources be used in productive activities. The problem is that in a patriarchal society like ours, even if we get a water source close by, there will always be some work to keep us busy,” says Paari.