Seetha Gopalakrishnan
03 Nov, 2016 . 4 mins read
One of the temple ponds of Kooram, neglected for years, has been revived by well-meaning citizens.

For hundreds of years, tanks, both big and small, served people and cattle alike in Tamil Nadu. Chennai’s neighbouring district of Kancheepuram was the the wealthiest when it came to water through these means. The Chola and Pallava kings, along with various other major and minor royal houses of the time, dug out massive irrigation tanks or eris, as they are known locally, to support agriculture in a terrain fed by seasonal rains.

Kanchipuram’s groundwater brochure of 2007 records 1942 tanks irrigating a total area of 60,732 hectares of agricultural lands; not including the multitude of temple tanks and minor ponds dotting the landscape. Given that, portions of Kanchipuram district is part of the greater Chennai Metropolitan Area, the landscape has been transforming rapidly over the last decade with agricultural lands being expeditiously turned into real estate plots and special economic zones (SEZ).

Decline in agriculture and allied activities contributed directly to the rapid deterioration of local water sources. Scores of minor tanks and ponds across villages lay in various stages of disrepair and the village of Kooram was no exception. 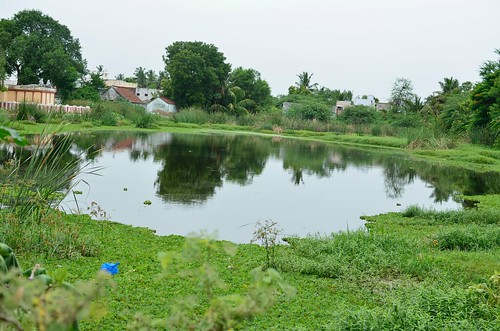 Kooram with a 2000-strong population has around 12 kulams (shallow dug out waterbodies) in addition to several kuttais (shallow natural depressions holding water) which mainly serve as watering holes for local cattle. But most of them have fallen into disuse over the years, with the Samathamman temple tank right in the middle of the village being the worst of all. Concerned about the persistent degradation, Radha Varadarajan, a native of Kooram, wanted something done to turn the situation around.

With Sekhar Raghavan and Saravanan from the Rain Centre in Chennai on board, the team set out on a consultative process, engaging villagers in the selection and planning process. A plan was hatched to renovate the Samathamman temple tank which was hitherto used as an unofficial garbage dump. The tank was to be desilted, spruced up and reclaimed, mainly as a groundwater recharge structure.

“We started working with the overall objective of reviving traditional waterbodies and realised that villagers had to be made aware of the need to preserve these tanks and ponds for posterity. And, for such projects to be successful in the long run, it is imperative for the local community to play an active role throughout,” remarks rainwater harvesting expert, Raghavan. The project was funded by Asian Paints as part of their corporate social responsibility (CSR). Raghavan has been instrumental in installing a host of rainwater harvesting structures in institutions across Chennai city as part of that commitment. 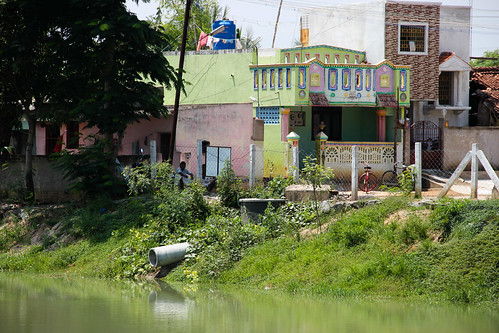 The pond, which was once used by cattle, was heavily encroached upon. Nearby villagers who did not have individual soak pits to treat their household sullage were dumping the waste right into the temple pond. The extent of sullage dumping, however, was not known until the project got underway. Laying of a canna bed to treat the incoming sullage was suggested to cut back pollution. “Since the main purpose was groundwater recharge, the water need not be treated to drinking water standards and hence filtration through the soil was suggested to minimise contamination,” adds Raghavan.

The pond was dewatered and desilted, increasing its depth considerably to 1.2 metres, capable of holding close to 64 lakh litres of water. Given its downward penetrating root system, perennial bunchgrass vetiver was used as a natural bund-strengthening and stabilising agent in place of rocks and stones. The overflow from the tank was designed to flow into the irrigation channel which ran from the Kooram eri which irrigates fields in and around the village.

Despite the renovation and desilting, the problem of sullage inflow threatened to eclipse the positive outcomes of the effort. “For a long time, we had no clue about how to keep the renovated pond water free from household wastewater. Fifty years of bad practice and habits die hard. We tried several options, from individual communication to campaigning. It worked, but not fully. Some treatment plan seemed mandatory,” says Radha. This is when bioremediation was suggested as an option. 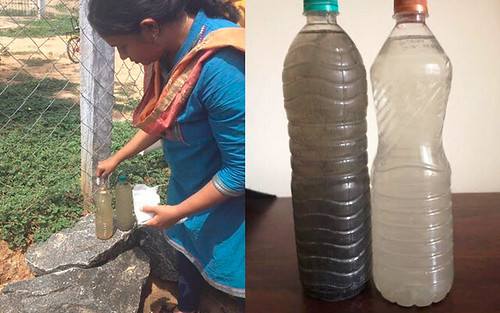 Bioremediation essentially refers to the treatment of wastewater using microorganisms. Bacteria, which are ubiquitous in ponds, feed on the organic material present in water. But when greywater inflows affect the balance, the ability of the bacteria to break down organic material is severely compromised. “To correct the imbalance, a combination of bacteria and fungi has to be introduced to degrade the complex organic material into simpler components,” says biotechnolgist Dr Nithya Venkataraman who has been working with the team in Kooram.

Tests have been carried out in barrels containing water samples from the pond and the results have been promising. A marked reduction in total dissolved solids and chemical oxygen demand (COD), an indicator of the presence of organic matter have been noticed. After treatment, the sample water was found to contain 350 mg/l of total dissolved solids against a maximum of 2100mg/l prescribed by the Tamil Nadu Pollution Control Board. COD was 73 mg/l against a maximum limit of 250 mg/l for non-potable uses.

The Kooram team is thrilled. “Since the pond water was primarily intended for groundwater recharge, the parameters observed after the treatment are satisfying. Though not potable, the water is of irrigation quality, safe for both cattle and groundwater recharge,” asserts Nithya.