ARTICLES
Symbolic yet neglected
The 64 sacred teerthas at Rameshwaram are historically important and also contain a wealth of knowledge in water conservation methods. Can local communities continue to maintain them well?

The sacred teerthas at Rameshwaram

Rameshwaram is well-known as one of India's most sacred places and is an important pilgrimage centre. However, what isn't well-known is the history behind the 64 teerthas (holy water bodies) in and around the island. 24 of these are considered to be very important and of these, 14 are in the form of ponds, tanks and wells within the precincts of the temples while 31 are located outside the temples. The teerthas assume great cultural and spiritual significance in the history of the island. They also have immense ecological benefits.

It is believed that these water bodies around the temple are a perennial source of water that also help to recharge groundwater and harvest rainwater [2, 3]. They reduce the runoff and increase the time that the water stagnates, which ensures sufficient water in the domestic wells during the summer months [2]. The tanks also support a number of life forms besides being safe places for nesting of birds, fish, frogs, turtles, plants and add to the beauty and ecological balance of the region [2].

In areas where the rainfall is relatively low, temple ponds and tanks play an important role by retaining and conserving water. They also: 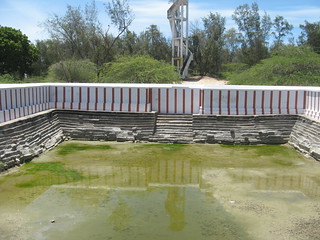 The stories behind these teerthas are linked to the journey of Lord Rama to Lanka and back after victory over the demon king Ravana. For example, the Jata teertham, surrounded by dense trees is supposedly where Lord Rama washed his hair (Jata) after he killed Ravana. Another myth related to the same teertham says that this is where Jatayu, the king of birds, fell after his fight against Ravana.

Another one called Villondi teertham, is located right in the middle of the ocean and has a small well filled with sweet water. Myth has it that Lord Rama shot his arrow into the ground here and got sweet water to quench Sita’s thirst. It is also said that Rama’s bow and arrow are buried here. Hence the name Villondi (buried bow).

Inspite of their cultural and spiritual significance, many of the teerthas, especially those located away from the premises of the actual temple, are in a state of neglect. A recent survey conducted by Vivekanand Kendra, Natural Resources Development Project (VK-NARDEP), an organisation working on sustainable development in Tamil Nadu, found that of all the teerthas, around 11 ponds, 4 wells and one sea bathing enclosure were in need of immediate attention (4). 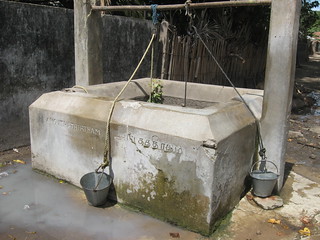 G. Vasudeo, Secretary VK-NARDEP informs, "We realised that these very old and valuable water harvesting structures lay totally neglected. So we decided that besides their religious significance, it was important to look at them as valuable ecological resources traditionally constructed to recharge groundwater and harvest rainwater. It was also important to understand the important role they could play in the socioeconomic development of the area as eco pilgrimage sites, thus creating possibilities for livelihood opportunities for local communities."

The organisation has since then decided to take up the revival and renovation of the teerthas. The project has been planned thus:

I visited the site of the teerthas located at a distance of about 7-8 kilometres around the temple. Mr. Muneeshwaram, who has been working on this project for the last year at Rameshwaram, showed me around starting with the renovation work of the Mangala teertham.

Mangala teertham is a huge tank, a dugout reservoir, which has steps on all sides reaching down to the water. It is located in the vicinity of Thankachimattam village near Rameshwaram. A group of masons were raising the height of the compound wall to prevent dirt and garbage from reaching the tank. They informed us that the cleaning had taken them around 4 to 5 months. "When we first came here, the whole tank was dry, full of silt, dirt and alcohol bottles. No one was using this water and this place was deserted. It took us around a month to remove the silt from the pond". They showed us the silt removed from the tank that was spread around in the area. "Water started appearing in the tank only after this silt was removed" they added.

The tank is now full of freshwater and this has begun attracting people from the villages. They have now formed a committee, which is responsible for the teerthas maintenance. The involvement of the villagers raises the hope of it being maintained in the future even after VK-NARDEP leaves after completion of its work.

The Rina Vimochana teertham, located close to the Ekantarama temple, is also another huge tank with steps on four sides to reach the water. The renovation work was in progress as I reached there. A number of people were removing the mud and garbage from the pond, which has a well in the centre. This acts as a water source even during summer. I was told that this continuous flow of water had to be pumped out before the pond was cleaned. Inside the Ekantarama temple is the Amruta Vapi teertham, which is in the form of a well. It is regularly used for drinking water by the people from the temple or those visiting the temple. 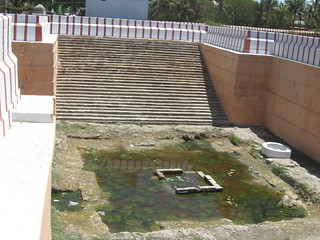 Some of the other teerthams that I visited included Hanuman Kund and Draupadi teertham. Hanuman Kund is said to have been created by Lord Hanuman to meet the drinking water needs of his vanara sena (army of monkeys). The water levels in the pond were low but I was told that the pond is filled up after the rains and people regularly use this for taking a bath.

The Draupadi teertham, which was full of broken glass and liquor bottles, was also renovated but it still continues to be neglected by the community. The Nakula and Sahadev teerthas have also been revived recently, but have lower water levels and are not maintained and used regularly by the people, maybe because the water in the teerthas is normally used while performing the last rites.

Most of the temple tanks were served by inlet and outlet systems in the olden days. In recent years, many of these systems are blocked due to the uncontrolled growth of commercial and residential apartments in the catchment areas. This causes most of the precious rainwater to run into the sewers and reach the sea. This, coupled with continuous withdrawal of groundwater, has led to the gradual drying up of ponds and tanks in the cities [3]. 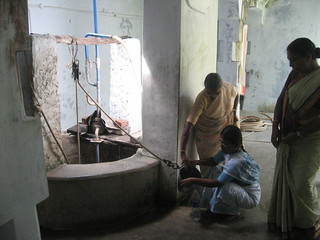 Under such circumstances, efforts such as those undertaken by VK- NARDEP to restore and revive these traditional water bodies are extremely important. They play a vital role not only to preserve these sacred water bodies but also to revive the traditional wisdom of our ancestors at water conservation through rainwater harvesting and recharge, while maintaining the ecological balance of the area.

The author is extremely thankful to Shri G. Vasudeo, Secretary, Vivekananda Kendra, NARDEP for introducing her to the work on the conservation of the teerthas, for his help in visiting Rameshwaram and for his comments and suggestions on this writeup. She is also thankful to Mr V. Muneeswaran for taking her around to see the teerthas.