ARTICLES
Staying afloat, one stepwell at a time
Jodhpur has a unique problem. Unlike other cities, it is dealing with excess groundwater. Reusing its traditional water structures is the way forward.

Toorji ka jhalra, one of the step ponds that attracts tourists in Jodhpur.

"Jatene dekho utene bawri" (wherever you look, there’s a stepwell). This is how the woman standing on the threshold of her house, in the walled city of Jodhpur, told us when we asked where we could find stepwells in her neighbourhood.

According to Rajyavallabh and Prasad Mandan, two traditional books on town planning in Rajasthan, an ideal city should have 40 stepwells. Jodhpur has more than 100, some hidden away in its many narrow alleys.

All over India, stepwells are on the verge of extinction, barring a few big ones that have survived on being turned into local touristic wonders. Jodhpur, however, has the unique distinction of not only maintaining these structures well, but also using the water for domestic and recreational purposes. In fact, the city’s stepwell system is an example of what can be achieved through people’s participation.

Legend has it that Jodhpur has a curse. In the mid 15th century, the king of Mandor, Rao Jodha, was keen on moving his capital to an elevated spot from where he could defend the empire against frequent attacks by enemies. He found Chidia-tunk, a 125m-high rocky edge, ideal for this. However, Mehrangarh Fort, that was built at the site, encroached upon the hermitage of Saint Chiriya Nathji, who announced that the new city would face periodical famines. City planners, however, decided to take this curse as an opportunity.

While the fort is on the hilltop, the walled city of Jodhpur is located at the foot of Chidia-tunk. This made it possible to supply water through a gravity-led system. A vast network of lakes and canals were built in the hills around the city, while wells, stepwells (bawri), step ponds (jhalara) and tanks became a common feature in the plains. Rainwater stored in the lakes uphill percolates through aqueducts or underground channels to recharge wells and stepwells. Kaylana Lake, located around 10km uphill from the city’s heart, became the biggest water source for this purpose. 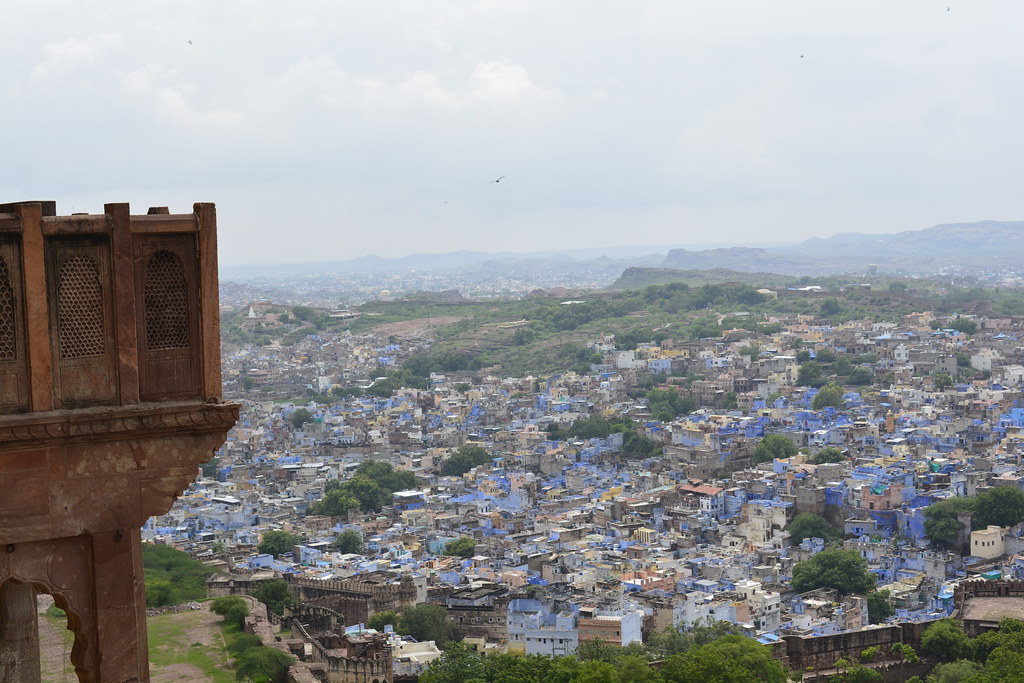 Thus, Jodhpur offered a unique concept of water architecture that played upon the city’s geographical and geological strengths. Several folk tales and religious rituals have been woven around these ponds and stepwells. For instance, Gangaur, an important women-only festival held in honour of Gangaur Mata (an incarnation of Goddess Parvati), involves praying to the water and taking a bath before sunrise.

Many of the stepwells here were erected under the patronage of women of the royal family. A few were also funded by businessmen, royal servants and other people. Two of them were even erected by eunuch servants of the royalty. One common thread among all these structures was public participation in the work, which continues to this date.

Water supply and the problem of plenty 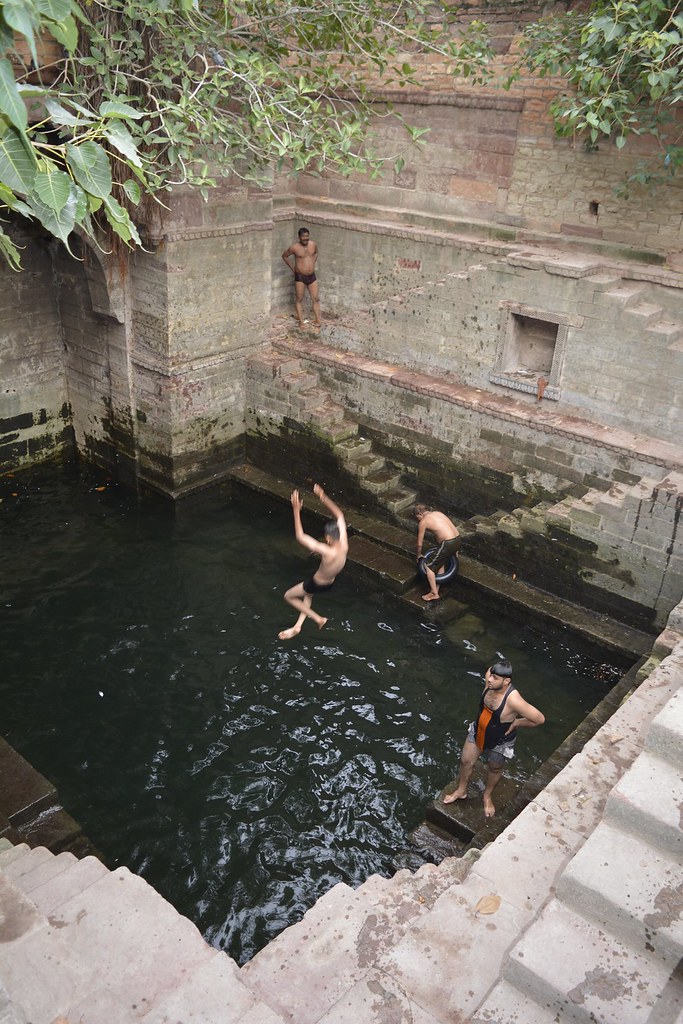 As the town expanded and its population grew, the demand for more water was answered through the construction of the Jawai river reservoir, situated around 125km from Jodhpur, in 1957. However, things changed drastically when supply from the Indira Gandhi canal reached the city in 1997. The canal supply ensured optimum water level in Kaylana Lake throughout the year. And, this was the beginning of the problem of excess. Water supply to the city rose from 183.46 lakh gallons per day in 1994 to 259 lakh gallons per day in 1997. In 2015, the supply was 377.54 lakh gallons per day. With greater stress on tap water, stepwells saw a long period of neglect with many turning into neighbourhood garbage dumps and places for open defecation. Even the usage of dug wells and hand pumps declined.

Since the residents now stopped using groundwater, the water table kept rising. Today, groundwater can be found at a depth of just three metres in some areas of the old city which are now facing waterlogging issues.

“Being located at the base of the hill, Jodhpur is like a bowl. It collects a lot of water that should be used consistently to avoid flood,” says Rajesh Joshi of Grow Sansthan, a non-profit organisation working on environment issues in the city. A study done by the Central Ground Water Board (CGWB) in 2015 found that water from the old drainage and sewerage system of the walled city also seeps down into the ground further adding to the trouble.

The stepwell adjoining the Satya Narayan temple is slowly coming back to life. The well is covered with an iron grill to prevent people from throwing garbage into it. The bawri has three levels. While two of them have been cleaned up recently, work on the third one will start post monsoon.

Rajesh, who enlisted volunteers to clean this bawri, talks about the problems. “This structure was full of construction waste and garbage up to the ground level. Every weekend we would start digging. The task becomes more problematic when you can’t get consistent volunteers. Many would not turn up for the second time. When we found a human skull in the bawri, the number of volunteers dropped to nil,” he says. Thankfully, the erstwhile royal family of Jodhpur extended help by sending staff members from Mehrangarh Fort to assist at later stages.

Taapi bawri ,in the Khand Falsa area, has a different story to tell. It was saved from such bad times, thanks to the religious and traditional values attached to it. A popular saying in the region goes: “Taapi bawri ar Neemlo kuon, nahin dekhyo vo jeevto hee muon” (One who hasn’t seen the Taapi stepwell and Neemlo dug well is as good as a dead man). Both Taapi and Neemlo are still being used extensively by the nearby temples and by the people living in the vicinity. At the stepwell, one can find teenagers smearing themselves with multani mitti (clay) before taking a dive from the pavillions. “It never gets dirty as we maintain it well. As long as people use a resource, they will keep it in good shape,” says Bharat Sharma, a college student enjoying a swim in the bawri with his friends. 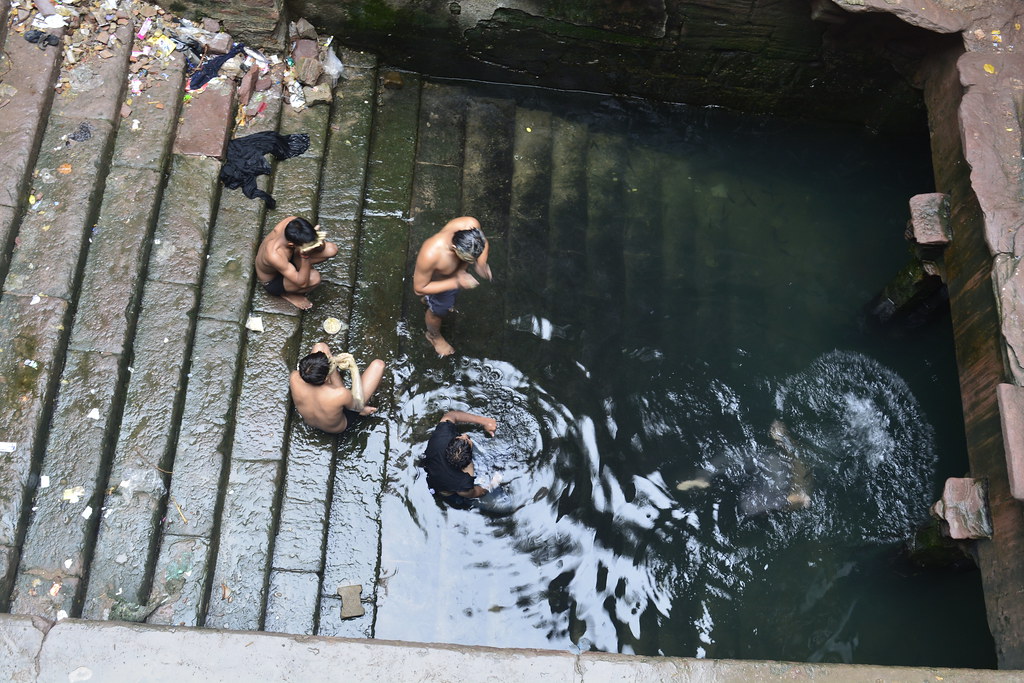 The Jodhpur Public Health Engineering Department (PHED) has also installed water pumps at the recently cleaned-up stepwells to regularly lift water for tertiary uses. “Water is mostly used for irrigating the Umed Garden. Some of the water is also supplied for domestic purposes after filtration,” says Gurudutt Awasthy, a local journalist who has written extensively on the stepwells of Jodhpur. This move by the PHED has also helped restore the groundwater balance of the city. PHED is currently pumping out 28.13 mega litre per day from 89 ground water sources including stepwells, dug wells, step ponds and tubewells. Around 42 percent of this water is supplied to the Border Security Force, the Indian Army and the Railways. 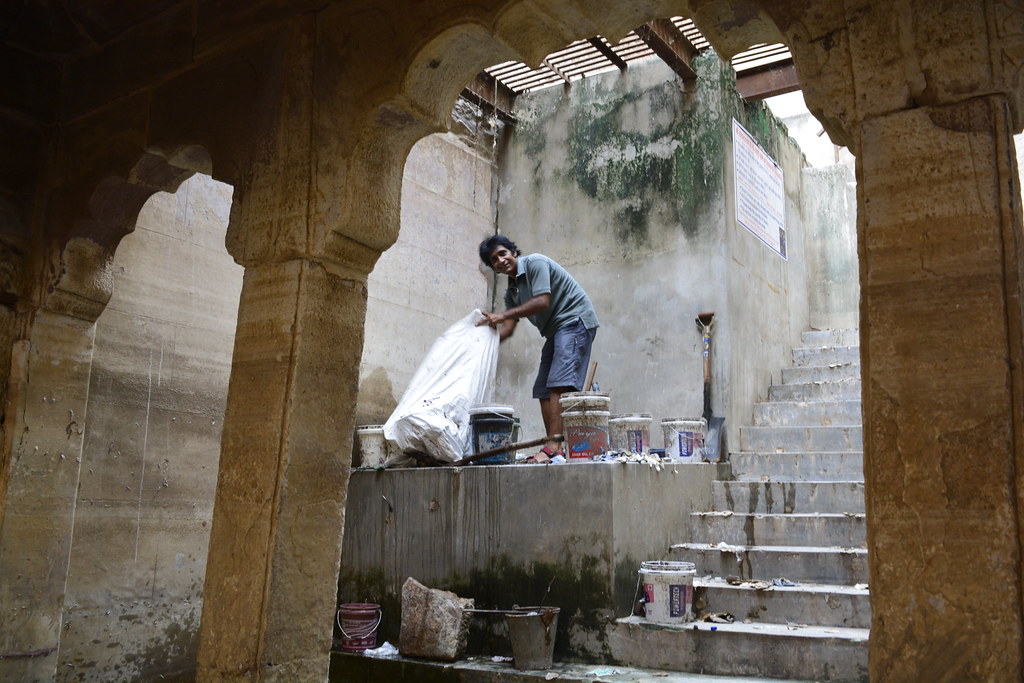 Rising groundwater is an issue Jodhpur will continue to face for some time. The reuse of stepwells, which has been a crucial step towards fighting this crisis, only proves that they are as good at preventing waterlogging as they were in quenching thirst in the past.