State does a Nero while Kharun weeps

Makarand Purohit
18 Jul, 2016 . 5 mins read
Despite the pitiable state of a polluted Kharun, the government is keen on developing the riverfront to attract tourists.

At sunrise, everything is luminous but not clear.

― Norman Maclean, A River Runs Through It and Other Stories

In September 2015, the BJP-led government in Chhattisgarh decided to put a master plan in place for the development on the Kharun riverfront. To be modelled around the Sabarmati riverfront development project, considered the best of its kind, Kharun riverfront project is alleged to have been sanctioned without studying the impact of it on the ecosystem. Done along the lines of the development work on the banks of the Thames in London, Sabarmati riverfront development inspired many BJP-led state governments to replicate it on various rivers like Yamuna, Ganga, Brahmaputra and Mithi. 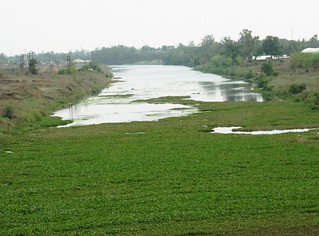 According to the report, “Riverfront of Thames in London and Seine in Paris are often cited as successful models of riverfront development in India. The ecological as well as social setting of Indian rivers and the challenges that we face, however, are significantly different from these foreign models. A blind replication will only be wastage of public funds and degradation of the rivers further. Riverfront development projects across the country seem to be alienated from the river, and talk only about its urban banks, trying to achieve cosmetic changes on the deeper wounds by encroachment and real estate development on the belly of the rivers. The need of the hour is river rejuvenation and not river FRONT development.”

“More than 90 percent of the rivers in India are polluted and in a sorry state. The drinking water availability of the people dependent on these rivers for domestic use has been severely affected because of unregulated contamination from sewage and industrial waste,” says Gautam Bandhopadhaya who has been working on the water sector issues in India for two decades.

The plight of the river

Kharun has been the lifeline of Raipur for over 40 years. In the last one decade or so, the quality of the river has deteriorated from untreated sewage finding its way into the river. Now, the water quality has declined to such an extent, it is not even fit for bathing.

The housing and environment minister Rajesh Munat and the public works department gave their green signal to the development activities of the riverfront before the Raipur Development Authority (RDA) conducted an impact assessment of the project. 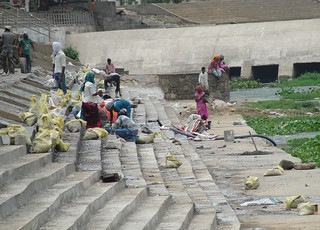 Despite the sorry state of affairs, the Raipur Municipal Corporation (RMC) is busy constructing Mahadev Ghat on the river bank to attract tourists.

“The government officials have informed us that the Kharun riverfront development would attract tourism but which tourist would be interested in a contaminated Kharun? The government should prioritise cleaning the river and providing clean and safe drinking water to people instead of this useless riverfront development,” says an agitated Nathuram Sahu, a 70-year-old resident of Raipur.

The proposed Kharun riverfront development plan would occupy 1,19,297 hectares of land--76 percent of which is private--at a cost of Rs1500 crore. The project is estimated to severely affect more than 50 percent of the households of Bhotali and 21 other villages along the bank of the river. It is still not clear how many people would be displaced or how many livelihoods would be affected by the riverfront project.

“The RDA officials recently visited and surveyed Bhotali and other villages along the banks of the river to assess the households and agricultural land that come within the periphery of 300 m of the river bank which will be affected by the riverfront project,” says CEO, RDA, Mahadev Kawre. The villagers learnt about the government’s plans during the survey. They were furious.

“The farmers and the residents of Bhotali have been protesting the government decision. The government has not taken any prior approval from the 22 gram panchayats. The master plan for the project has been drawn illegally. The government is trying to favour private contractors and colony developers by snatching our land,” says the sarpanch of Bhotali, Ganga Prasad Nishad.

“After the massive protest by the farmers and villagers, the government has decided that the RDA will not be involved in the overall development of the riverfront. The government will establish a separate authority to deal with further riverfront development work,” says CEO of RDA, Mahadev Kawre.

The river contamination has had negative health impact on the village and the urban residents. Water-borne diseases like jaundice and typhoid are very common here. As per a report by Business Standard in 2014, 67 people died that year from jaundice in Raipur district. “The domestic sewage network of Raipur is linked to Kharun through eight big canals, and almost all the sewage flows into the river without any treatment,” reported Patrika in 2016.

“The contaminated water has killed 90 percent of the fishes in Kharun river and have snatched more than 1000 fisherfolks of their livelihood in the region in just one decade. Now, most of them have become labourers,” says 44-year-old Murli Nishad, a fisherman in Bhotali.

The amount of sewage that gets emptied into the river need at least seven or eight sewage plants to treat it. For the eight big canals carrying the muck, only one sewage plant has been sanctioned at the Mahadev Ghat area. The estimated cost of this wastewater treatment plant is Rs 6.2 crore.

“If the government decides to spend Rs 1500 crore on sewage disposal and rejuvenating the river in an eco-friendly way, then the people of Raipur can get clean and safe drinking water throughout the year. The treated water can also be used for agricultural purpose,” says Shiv Kumar Sahu of Bhotali.

Rejuvenating our rivers is the need of the hour but replicating models of riverfront development like Sabarmati is not a scientific way to do it. The way to revive Kharun is to treat the wastewater before it enters the river, recharge the upstream aquifers in the river basin and to develop an eco-friendly system on the banks of the river,” says winner of Stockholm water prize 2015, Rajendra Singh.

The people living on the bank of Kharun are worried about their livelihood. The fear of getting displaced haunts them all the time. There is an urgent need to address the basic needs of the people before beautifying the river bank.