Blue facades line the Sukhdev Vihar colony in South Delhi, considered plush by Delhi standards. They are in place to shield houses from layers of soot that would otherwise settle on their walls and grills. Soot from a power plant that began operations almost two years ago.

The Timarpur Okhla Waste to Energy (WtE) power plant promised to get its fuel from the city's refuse and perform the gargantuan task of clearing the city's landfills. For its philanthropic motivations, the plant was the first one in India to be granted carbon credits under the United Nations Framework Convention on Climate Change, which means it would be funded for cutting carbon dioxide emissions from garbage landfills. Residents say that this was just a scam. 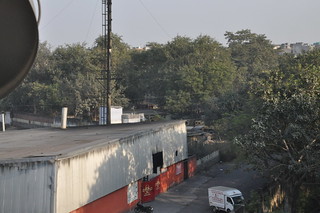 "We were already suffering due to a common bio-medical waste treatment plant (CBWTF), right next to the WtE Plant and now they have dumped this on us. If this is the state of affairs right in the heart of the capital, one can easily imagine what is happening in other parts of the country," said Ranjit Devraj, a journalist and a resident of Sukhdev Vihar. "The Plant has been spewing deadly compounds like dioxins, furans and particulate matter way beyond the prescribed limits," Devraj added. The Delhi High Court has already ordered the shutdown of the bio-medical plant Devraj mentions but it continues to run despite the closure orders.

"Ash settles on everything, clothes drying on the line, buckets full of water and even books. It is not just ash and the stench of garbage that we have to live with everyday but also the choking and breathlessness at night. Asthma cases have increased here. The fruits and vegetables at Okhla Mandi, that supplies them to the whole of South Delhi, are also contaminated by ash from the Plant.

Several families have moved out of the locality but others who have stayed behind, have filed a petition with the National Green Tribunal (NGT) to safeguard their right to clean environment.

The petition, filed by the residents, asks for quashing of the environment clearance granted to the Plant and its subsequent shutdown. According to them, the project proponent, the Jindal Group, obtained environment clearance and the consent to operate the Plant by providing false information to the Ministry of Environment and Forests (MoEF) and the Delhi Pollution Control Committee.

Their fight against the Plant is not new. It started when the 16 MW WtE plant that targets to process 2000 metric tonnes of solid waste per day got environment clearance in 2007. The Plant has been built with an investment of Rs. 285 crore as per a Memorandum of Understanding between the Delhi Government, the Municipal Corporation of Delhi and the company.

As described in the Environment Impact Assessment report (EIA), the plant was supposed to constitute a biomethanation plant for collecting methane gas from biodegradable waste, a plant to make briquettes out of the calorie-rich waste, better known as refuse-derived-fuel, a waste seggregator and equipment necessary for electricity production like a boiler and turbine, etc. "What exists on the ground today is a Chinese incinerator that burns the waste generating hazardous fumes. No action has been taken against the company for deviating from the EIA even though an Expert Committee constituted by the Central Pollution Control Board has confirmed the change in technology," says Gopal Krishna of Toxicswatch Alliance that has been fighting against incinerator technology. 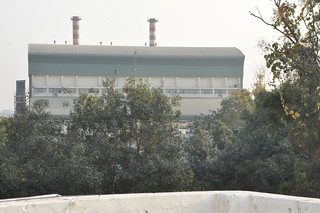 Another false assertion made in the EIA was about the distance of the Plant from residential colonies and the nearby Okhla bird sanctuary. The EIA said that colonies like Sukhdev Vihar are more than five kms away from the plant when in reality, they are a mere 250 metres away.  The boundary of the Okhla Bird sanctuary, a major wetland on the Delhi-Uttar Pradesh border, is about 1700 metres from the WtE Plant which required it to obtain clearance under the Wildlife Protection Act from the UP Government. "According to the NGT bench, they are not empowered to pass orders related to cases of wildlife but there have been instances in the past when the NGT has heard wildlife cases," said Devraj.

After all the letters and appeals to Chief Minister Shiela Dixit and the MoEF fell on deaf ears, the residents finally filed a case in the Delhi High Court in 2009. Even as the case was being heard, DPCC granted "consent to operate" to the Company in January 2012 and the Plant started functioning. The case was transferred to the NGT a year later where it is being heard until now.

Instead of action against the Company, the NGT ordered another test in the presence of a Commioner appointed by the Tribunal. Tests were conducted in April and July subsequently allegedly with prior information to the Company. At a hearing in September this year, the NGT said that the Plant will have to shut down if they don't control emissions within three weeks. Two months later, there has been no strict action yet.

"The NGT bench said that the plant has been running undisputed since 2012. Doesn't the HC case of 2009,  former Environment Minister Jairam Ramesh's letter to the Delhi Chief Minister about violations of environmental regulations and a March 2012 report by the CPCB, which says that the Chinese boiler technology is unproven, constitute dispute? The Asian Development Bank’s Asian Pacific Carbon Fund dropped the Timarpur-Okhla incineration plant out of its portfolio which is evidence enough that the plant is disputed from the beginning," said Gopal Krishna. 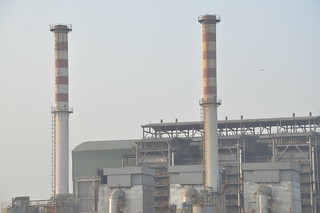 "According to the Tribunal bench, they cannot take any action against the Company as we, the petitioners haven't asked for it in our old application. A lot has changed since the original application of 2009 therefore we were asked to file an amended application," said KK Rohatgi, advocate for the residents.

The latest hearing in the WtE matter happened last week on December 5th. In this hearing, the amended application was put on Court records and the Tribunal asked the Company and other respondents in the case to file their counter replies to it within two weeks. Even as the Plant continues to spew toxic gases, affidavits and counter-affidavits continue to exchange between the Company, the residents and the Authorities.