If you saw Akhil Gogoi anywhere on the road, chances are that you may not spare him another look. A quiet young man, with a sparkle in his eyes, and a shy smile on his face, he seems ordinary. But take a minute to talk to him, and you will likely be rooted to your spot. Words tumble out of his mouth, his eyes light up and his belief in what he does is evident.

Akhil Gogoi, is from Assam - the state where the mighty Brahmaputra meanders and grants life - a beautiful state endowed with many resources but one that unfortunately comes up in public view for all the wrong reasons. That is where Akhil Gogoi has tried to bring about a change - a change for accountability, a change for people’s voices to be heard. He is an RTI activist, who has clamoured for transparent and factual information on issues like the NREGA scheme doled out by the government, the Public Distribution System and the haste to build dams in the fragile Northeast, to name a few. His quest is direct - where and who are the actual beneficiaries of these schemes and projects?

In 2005, he formed the Krishak Mukti Sangram Samiti (KMSS), which works towards the rights of peasants and farmers. He campaigned against fraudulent financial institutions in the state and strongly opposed construction of ill- conceived demands for large dams in the Northeast. The foremost of these is the mega Subansiri hydroelectric project with a 2000MW capacity, on the Subansiri river. The proposed gravity dam, which is to be 116 m high, is located 2.3 km upstream of Gerukamukh village, Dhemaji district & lower Subansiri district, along the Assam- Arunachal border, and is described as a run-of-the- river (RoR) project.

Incidentally, Ramaswamy R. Iyer, former Secretary to the Government of India, has spoken strongly against the ‘green’ tag accorded to these RoR hydroelectric projects. “The huge diurnal variations in flows in these projects, are a feature that no aquatic life or human settlement can cope with. The river soon ceases to be a river anymore.”

Hydro development in the Northeast has been on an upswing, and flood control is one of the most touted reasons for the construction of dams. But projecting a multi purpose dam as a flood control mechanism is in itself an unviable proposition [1]. Matters worsen when the regional seismic instability of the area is taken into consideration. Apprehension of the farmers and the locals grew, and questions were raised on the proclaimed benefits of the dam. People needed to know the economic benefits and the ecological consequences to the proposed dam. 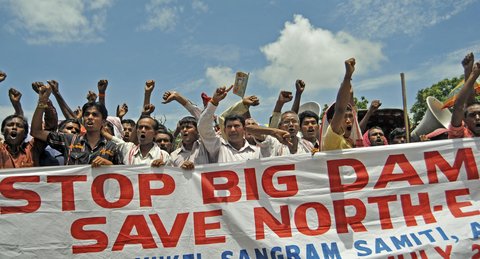 ‘studying or resolving basic downstream, flood and safety issues’ [2]. Concerns about lost lands and livelihoods, tectonical safety of the dam and the enormous ecological impact, began to be voiced. KMSS lead a peaceful agitation to raise these issues that culminated into a huge anti-dam rally in Guwahati on July 13, 2011. Nearly 6000 people from across the state protested against the construction of big dams and the ‘anti- people policy’ followed by the centre. Till date, the work is at a standstill, as KMSS continues with its road blockades to prevent equipment and material to reach the dam site at Gerukamukh.

Akhil, who has spearheaded this movement, has faced both brickbats and bouquets in his struggle. He was recently honoured with the ‘Bhagirath Prayas Samman’, an award for his dedicated work on river integrity and safety, at the Indian Rivers Week-2014 conference. He has previously also been conferred the Shanmugam Manjunath Integrity Award for his relentless fight against corruption in 2008 and the national Right to Information (RTI) Award by Public Cause Research Foundation (PCRF), in 2010. Parallelly, he has also been arrested for instigating violence, constantly harassed, dubbed a ‘Maoist’ and accused of anti- national sentiments.

He successfully used the RTI Act along with mobilising people en masse to ensure that this proposal that could ensure skewed development, increase environmental conflicts and threaten the very fabric of life of people in that area, is halted and his river gains some breathing space.

"Nearly 39 lakh Assamese people's livelihood depends on the Subansiri. With a powerhouse coming up, it is our lives that will be affected.That is why thousands and thousands of people have joined their voices with us today." As he says, it is an award for the people who resorted to a 'street fight' to ensure that the Subansiri HEP stays closed. "So, we have turned this environmental issue into a political issue and now into a national issue", he adds.

A recent meeting of the Power Minister with government officials, dam experts and representatives from various Assam organisations including the KMSS, has ended in a stalemate, with Gogoi reiterating that, "The government failed to meet most of our demands."

And like a warrior, who has fought for his river’s integrity, he intends to continue this ongoing struggle..smiling!

[1] Brahmaputra – The Beautiful River or The Battleground?