Manu Moudgil
16 Jul, 2016 . 9 mins read
Pisciculture is changing the lives of farmers by offering a good alternative to land-based agriculture. Backed by the government, it is picking up well.

Dhanmaniya Devi had never tasted a ‘good’ fish. “All we had during my childhood were the small varieties which come to rivers during monsoon. They are rarely seen now,” says the 65-year-old villager in Sildag of Palamau district in Jharkhand. This is why when her family reared the commercial variety fish last year, she was delighted. The fish also tasted good because the seed was bought with the money Dhanmaniya got as loan from a self-help group (SHG).

In Jharkhand, women SHGs are gradually venturing into popularising pisciculture or fish rearing, as they see in it an opportunity to break through the circle of poverty. At Sildag village, low rainfall leads to poor agriculture output. Wild animals also destroy crops leaving little for the locals to sustain on.

Unlike the neighbouring Bihar, fish farming is not a traditional occupation in north-west Jharkhand. People usually catch fish during monsoon for consumption from rivers or ahars (area where rainwater collects due to natural slope of the land and embankment on three sides). Fishing lines, tyre tubes as floats and make-shift wooden platforms are very commonly used while professional equipment like nets, boats, et al are still seen as luxury.

The region also has geographical limitations as it receives isolated rainfall and sandy soils don’t retain much water resulting in high evaporation and seepage rate. “This means the fish farming gets restricted to one half of the year. Still, people are willing to do this because it’s better than doing one-season crop,” says Ashrita Tirkey of Vikas Sahyog Kendra (VSK), a non-profit organisation which has been promoting fisheries in the region. Another welcome transition is the shift in focus from a few farmers with big ponds to many small landholders or joint ownerships.

The credit goes to the state fisheries department which has been actively promoting fish farming by extending trainings, subsidies on fishing nets, supplying free seeds and feed besides offering monthly mobile recharges and life insurance covers to fish farmers. A few of the enterprising farmers have also been given support to buy their own motorised two-wheelers. In fact, Jharkhand’s training centre near state capital Ranchi was certified the best skill development centre by the union government last year. "The response is so good that we had a target of 250 farmers, but sent 291 for the training this year. People are willing to shift from less-profitable crop cycles to pisciculture," says Rann Vijay, extenstion officer with the state fisheries department at Latehar district.

With fish farming giving them a livelihood in the absence of enough water from rain, the out migration for work, which is common here, is slowly decreasing. Rajdev Baitha of Rishiyappa village had migrated to Varanasi at the young age of 12 years. From pulling cycle rickshaw in Varanasi to maintaining railway tracks and driving a transport vehicle in Mumbai, he has done it all. He came back home, 20 years later in 2011, with tuberculosis. The one-acre farm the family possessed yielded little for sustenance. So, Baitha started selling trinkets and beauty products, moving from one village to another on cycle or by foot. Having experienced city life, Baitha was willing to experiment with new livelihood options. So, when fish farming came along, he decided to dive in, despite having no background in the field. 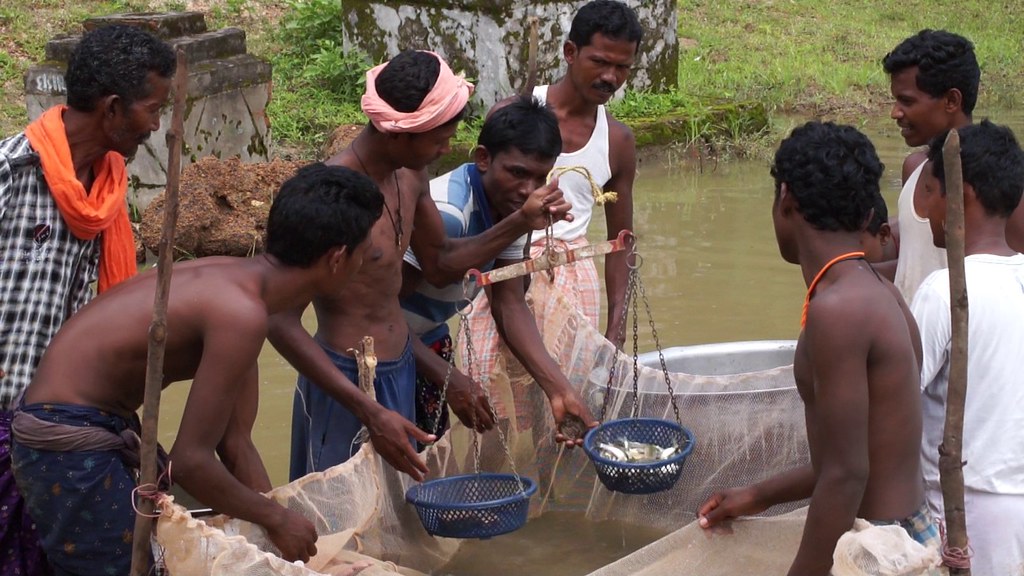 world’. “At the training, we met people who narrated how they earned more money by turning their farms into ponds,” he says. Thankfully Baitha had a five-acre ahar, owned jointly with his extended family. “In the first year, I earned Rs 70,000 profit by selling seven quintal fish. This was after giving out the share of my three uncles and consuming one quintal fish at home,” he proudly shares.

In 2015, Baitha made Rs 1 lakh profit. Now, he is getting a small pond dug for himself with support under the rural job guarantee scheme. “People now prefer fish to poultry since it is local and naturally produced. They don’t like the big fish that is imported from Andhra Pradesh. So the market is ready, just the supply needs to be increased,” Baitha says. Jharkhand’s fish production stood at 80,000 metric tonne in 2014-15 while the demand was 1.40 lakh metric tonne.

Looking at Baitha’s performance and enthusiasm, the fisheries department gave him subsidy to buy a moped, which he uses to sell fish in nearby Chattarpur town and other villages. The benefits are palpable in the health of his immediate family. “Earlier, one of my five children would be sick every day. Malaria, common cold and fever were so common. Now, as we consume fish on a regular basis, the immunity levels have improved,” Baitha says.

Satyendra Kumar Singh is the go-to source for all the fish at Palheya panchayat in Manika block of Latehar district. The 33-year-old runs a nursery which supplies fry (21-day fish offspring) at local level.

Nursery ponds are small-sized water bodies of about one hectare in area and 0.5 to 1.5 metre deep. Spawn, a three-day old fish offspring, is put in a nursery and nurtured into a fry or fingerling (a 60-day old fish). These are further purchased by the farmers who rear them till maturity.

Showing his two ponds of 70x40 feet each, Satyendra recalls how fish farming caught his attention: “The 0.16 acre land I had, yielded only three quintal rice every season, fetching around Rs 3,000. Due to the non-availability of water, there’s no rabi crop. I used to do odd jobs but it was very difficult to make ends meet. I was unsure if a small landholder like me could participate in fish farming.” At a training organised by the state fisheries department, Satyendra realised the possibilities his land held. The nursery ponds were to cost Rs 40,000. Thankfully, his wife, Kamla Devi was a member of a women farmers’ group, which extended a loan of Rs 37,000 at an interest rate of two percent.

With money secured, Satyendra got the ponds dug and used lime to eradicate predatory insects. After the first rain, he rushed to the district fisheries department and purchased 25 lakh spawn at Rs 3,460.

Satyendra also shared his knowledge--preparation of a pond for new fish, disease control and neutralisation of acidic waters through natural remedies—with the other 24 fish farmers.

After 21 days, the spawn grew into fry and were sold at Rs 300 per 1,000 fry. Satyendra Singh and Kamla Devi earned Rs 74,400 by selling 2.38 lakh fry from their small land in just one and a half months. The remaining spawn were released into a pond they co-own with 25 neighbours. From this, all shareholders consumed two quintal fish; Satyendra also sold two quintal of the produce.

The benefit for local fish farmers was also evident as they did not need to procure fry  at high cost from dealers from West Bengal. Many fry die while being transported from far-off nurseries. “With nurseries at local level, farmers can transport fry in big vessels with an oxygen pump. There is no need for special containers,” says Bidhya Bhushan Dutta, a fisheries expert with VSK.

The husband-wife duo was able to repay the loan with the sales and get a fishing net, life insurance cover and monthly mobile recharge as rewards from the district fisheries department for their entrepreneurial spirit. One of the main grouse is that due to the lack of good hatcheries in the state, spawn has to be imported from West Bengal and many of them die enroute. Farmers have to pay upfront for the whole batch, but the survival rate is only 25 per cent. "Lack of water the whole year around is the main reason. Hatcheries also require 24-hour surveillance and brooder fish which locals are yet to rear," says Rann Vijay.

Not just women and small-scale farmers, even people with disabilities are trying their hands at pisciculture here. Differently abled people are often seen as unproductive, requiring assistance. This perception is starker in rural India.  Sample Mithun Kumar Paswan. Despite his left hand rendered useless by  polio, this 24-year-old has been an adept fish catcher since he was 10 years of age.

His joint family used to breed fish in their two-acre ahar at Rishiyappa village. They could, however, earn around Rs 10,000-Rs 15,000 only. A specialised training in fish farming he attended at the state fisheries department in 2014 changed his life. “With the techniques they taught, the income from fish jumped to Rs 50,000 in the first year. After that we got another pond dug with financial support from the department and now we earn about Rs 1 lakh,” Mithun says. It’s also a much easier work for him to do than farming or labour. “It’s more about doing the right thing at the right time--preparing the ponds, feeding the fish well, monitoring their health and finally netting them. It requires less physical effort compared to other forms of agriculture,” he says.

Of the total income, Mithun gets half as he manages all the work while the rest gets distributed among his four brothers. Mithun also gives maths tuition and is soon going to open a middle school in his village.

Now the attitude of people towards his disability has completely changed. “Earlier, I was a disabled boy, now I am someone who gives business and education to others. They look at me with respect, not pity,” he says.

Home for me, education for kids

Sitaram Singh’s joint family, comprising around 40 people, lived off the 20-acre land it owns, consuming most of the harvest 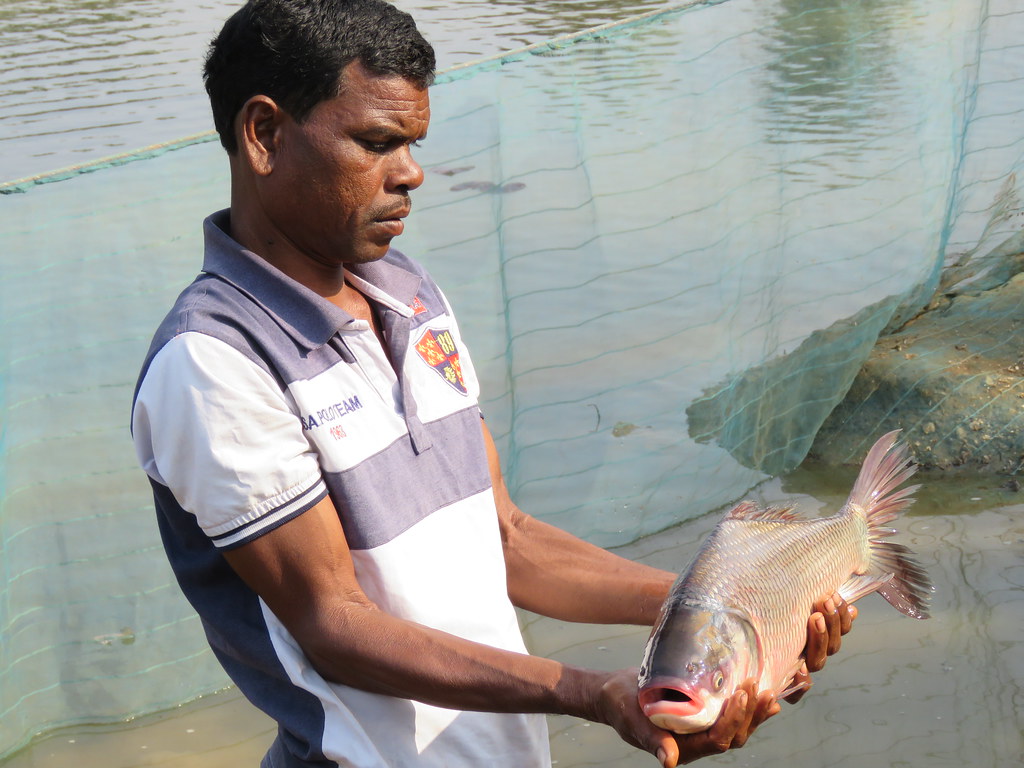 ed grain. Only Rs 50,000 worth of produce would be sold in the market. That did not help with the needs of education, health and special occasions like marriage. The children would drop out of school after middle school. Today, five of them are staying and studying in the district town, Latehar. “Two are in college while three go to school. We also had three weddings recently,” Sitaram says proudly. All this was made possible because of fish farming.

In 2013, Sitaram attended the training programme by the state fisheries department and started breeding fish in the ahar. “The income from fish is Rs 1.50 lakh. Last year, we supplied fish for five weddings in the nearby villages. Dealers in Latehar market have already booked their quota with us for this year’s produce,” he says.

The family is now planning to dig three small ponds which can be supplied with abundant groundwater. The canals running through their fields will also be used to breed spawn by using small nets on both ends. “We want to make best use of the natural resources available through the skills acquired over the last couple of years. From a simple farmer growing grains, we have taken to pisciculture literally like fish takes to water,” Sitaram says.

As these farmers beat all odds to improve their earnings, Jharkhand is aspiring to export the best fish to other states.