Deepika
31 Oct, 2013 . 5 mins read
A suburb of Agra, Nehar ka Nagla, found itself without access to potable water. The solution came from within the slum and it wasn't water tankers.

Historically, Agra has had decentralized water systems that were derived from a riverine core and supplemented by numerous lakes, wells and baolis (step wells). The system was a synthesis of geography, excellent Mughal fluvial engineering and an involved citizenry. Unfortunately,  much has been lost over the years.

Agra is now the most populous and fastest growing city of Uttar Pradesh. It has a population of 1,686,976 (Census 2011) of which more than 50% are estimated to live in low-income settlements where water is in short supply, electricity is sporadic and livelihoods are haphazard. Nehar ka Nagla, one such settlement in Ward 24, is a deemed urban slum and water is its biggest woe. Caught in the rapid transition of urbanisation, this slum has found itself in the heart of everyday problems.

Six women came up with an idea to combat the drinking water problems faced by the people of Nehar ka Nagla. They formed a self-help group (SHG), called Nai-Asha Swaya Sahayata Samuha, with the aim to provide clean drinking water to their neighbourhood. They call their water Shudh Jal. Water is priced at market rates and a regular market distribution approach is used but there is a difference from the popular market approaches–its management and ownership. 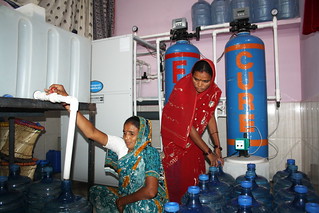 A very practical necessity led to the initiation of the SHG and the setup of the plant. Water is a commodity that households can and will purchase, but given the relationship of the community with water it is important to not commercialise it. It cannot be fully captured purely through market-based economic linkages.

In the absence of a municipal piped water connection, the primary source of drinking water in Wards 24 and 37 (where the women live) is the water supplied by private tankers. People live with the constant stress of awaiting the arrival of tankers, long queues and a monthly expenditure of any where between Rs.500 – Rs.1500 for buying water. Some families spend almost 20% of their income on buying water regularly for drinking and cooking purposes. 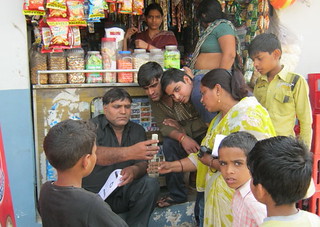 Testing of ground water samples here in Ward 37 showed extremely high levels of TDS (Total Dissolved Solids)—upwards of 5,000 particles per million (ppm) in some samples, when the Indian Government Regulations prescribe that TDS in drinking water should at all times be less than 500 ppm at the very least. Detailed tests found traces of arsenic as well. Thus the groundwater here is beyond usable, even for washing and bathing purposes. Most people complained of arthritis, diarrhoeal infection, joint pains, heavy stomach and so on and spent close to 15% of their income on medical bills.

A walk in any of the localities of Ward 37 will all of a sudden lead you to an open public space conveniently converted into a garbage dump. A network of open drains runs right through most parts of the locality, filled to the brim and passing right outside each of the households.

“Apne ghar ko saaf karke, kachra doosron ke ghar dalna chahte hai log. (People only believe in cleaning their own houses and dumping the waste into neighbours’ homes.)” The women equivocally reason the people’s individualistic approach for the failure of the community. “The streets outside are more than a garbage dump. But people rather walk the dump everyday than clean their street, lest the neighbour should benefit. We can never think for and as a community; we remain individual families huddled together in the same vicinity”, their conversation points at the core, unapologetically.

Along with the benefit of pure drinking water, the plant also provides the women with an employment opportunity that could eventually covert into a long-term secure source of work. More importantly, being a manager and co-owner of such an option goes much beyond a simple livelihood. A group of women entrepreneurs is not the most common sight to be seen in Ward 37.

The plant runs at a capacity of 4000 litres a day and water is supplied in 20 litre bottles priced at Rs. 5 if bought at source, and at Rs. 10 if delivered to the home. One of the six women stays at the plant from 7 a.m. when the first delivery is loaded into the hired auto-rickshaw, until 6 p.m. when the last lot is sent out. Till May 2013 the SHG had achieved 250 bottles per day. 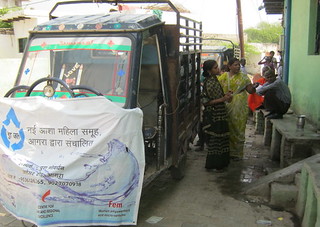 The women have taken to business like fish to sea. They discuss marketing strategies and operations with a finesse that would leave a business graduate weary. When the SHG plant was started, local competitors (there were and continue to be a few) did cut prices. But the households were happy to continue to transact with the SHG plant provided they were assured both convenience (doorstep delivery) and quality at the same time.

The group has its own little organization structure with basic roles and responsibilities laid out. They spend time at the plant site as well as in the localities talking to households and other stakeholders on an ongoing basis. They have developed an internal understanding and manage flexibly within this framework.

For the six women, the plant is a sense of identity and achievement, one that they wish to preserve. For them, “Nai Asha” is not simply a title on a banner that is meant to read well and sound nice for a funder, government official, or the occasional information-hungry visitor. It is about making it a way of life for themselves, and through them, the community in which they live.

This initiative is supported and mentored by Centre for Urban and Regional Excellence (an NGO working in Agra), FEM Sustainable Social Solutions (incubator) and Eureka Forbes (water filter equipment manufacturer). The drinking water plant is a conscious attempt to give a concrete form to this synthesis made through the triad of an NGO, a commercial player and an SHG.

You can view more images here.