Simple but unique idea revives a pond in Kerala

Pallichal panchayat in Thiruvananthapuram is one of its best performing panchayats. It has received a number of awards for achieving high literacy levels, keeping up good sanitation practices and for implementing a number of agricultural and irrigation initiatives. It was truly unbelievable that the people of this panchayat had allowed the three-acre pond located here to reach the state of complete neglect that it had a few years ago. The pond was filled with stagnant and dirty water and had also become a haven for antisocial elements because of which people hardly went there.

18 months later, the pond is, today, filled to the brim with clean water. It has painted benches for people to sit in and is well-lit. The surroundings are beautiful for people to relax and walk around. It has also become popular for its seasonal boating services, especially during festivals such as Onam. So what happened in these few months? Who worked a miracle to revive the pond?

Not one person but the entire village community according to Panchayat president K. Rajesh. He explained that the panchayat decided to revive the pond in order to alleviate the repeated drought conditions in the area every summer. The effort was implemented under the Mahatma Gandhi National Rural Employment Guarantee Scheme (MGNREGS), which focussed on the twin objectives of rural development and employment. Under the scheme, specific rural development activities such as water conservation and harvesting, afforestation, rural connectivity, flood control and protection such as construction and repair of embankments, digging of new tanks/ponds, percolation tanks and construction of small check dams were given importance.

A simple but unique idea 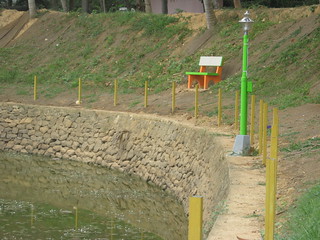 Besides desilting and cleaning of the pond, the panchayat has implemented a unique idea. Water from the Neyyar dam is directed through the canal using an underground pipeline to feed water into the pond. This helps maintain the water level in the pond during the summer months when there are no rains. During the rainy season, the pond is filled with rainwater and thus the water levels are maintained at all times.

Care has been taken to prevent soil erosion by spreading coir mats along the banks of the pond. These mats are made up of biodegradable coconut coir fibre and have been fixed to the ground using bamboo pins so that they do not come off easily. Grass has also been planted on the sides of the pond to prevent erosion.

“This effort has helped in recharging a number of wells in the surroundings areas”, informs Rajesh. “This has encouraged us to revive a number of other ponds in the area as this can go a long way in taking care of the drinking water and irrigation problems of the panchayat and provide a model for others to follow us”.