Chemudupati Samyukta
Hamsa Iyer
03 Jul, 2014 . 4 mins read
India is the second largest shark catching nation in the world and among the biggest shark fin exporters worldwide. Sadly, that's not a statistic to be proud of.

Sharks are very important to the oceans as they control the fish population and maintain the food balance. However, many species of these predators are under threat due to human interventions, specifically shark finning.

Shark finning is a cruel practice that involves the discarding of sharks back into the ocean once their fins have been harvested. These sharks, once finned, are often still alive and quickly sink to the bottom of the ocean where they die a slow and painful death. The global market for shark fins is driven by the demand for shark fin soup. An Asian delicacy of sorts, it is associated with wealth and status and is often served at Chinese weddings and banquets. Shark fin soup loyalists claim that the fins have taste-enhancing, medicinal and curative powers- all of which have been proved wrong by scientific research. 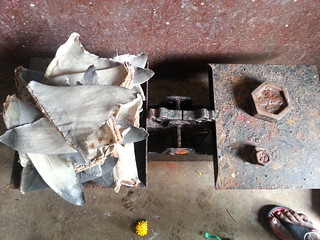 Further, finning has been recognized the world over as a leading contributor to the decimation of shark populations. Sharks are caught in all places with coastlines and are used for their meat as well as exported but finning is the real problem. India is the second largest shark catching nation in the world and among the biggest shark fin exporters as well.

India is a signatory nation to international conventions such as The Convention on International Trade in Endangered Species on Fauna and Flora (CITES) and the FAO which recommends a National Plan of Action for conservation and management of Sharks (NPOA Sharks). However, it is yet to undertake concrete measures to monitor the practices used to procure shark fins.

In India, shark fishermen traditionally harvest the whole body of the shark as meat, and for trade in pharmaceutical and leather industries. However, of late there have been reports of targeted shark fishing for fins by some Indian as well as foreign vessels that are illegally fishing in the Indian EEZ.

Threat to the existence of sharks means a threat to the delicate balance of marine ecosystems everywhere and the abundance, variety and survival of other marine species. It's time proper checks were put in place to ensure that this doesn't happen.