Usha Dewani Das
14 Oct, 2015 . 7 mins read
In 2009, Cyclone Aila caused significant damage to livelihoods in the Sunderbans. While saline soil is subversive to agriculture in the area, integrated farming gives many the courage to start afresh.

“Another flood like Aila should never happen again, but if it does, we have the knowledge to start working on our soil again”, remarks Binota Munda of Nebukhali village in Hingalganj block, North 24 Parganas. Cyclone Aila that came in 2009 caused extensive damage in large parts of India and Bangladesh, killing scores of people while thousands remained missing. About a million people were reported homeless. The effects of the storm surge are quite visible in the river delta area of Sunderbans in West Bengal. 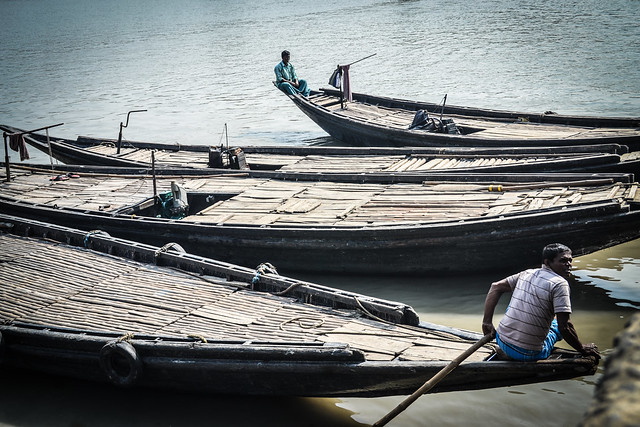 “It was all water, our huts were shattered. The Kalindi River overflowed, broke the embankment and inundated everything. When the water receded a few days later, we built our homes. But soon, the water came in again. This time the water could not escape from the bheris (ponds) and remained logged for over a month. Everything was chaos”, said Binota. Seven years hence, and the terror is still palpable in her voice but by integrating farming with the natural behavior of animals and insects in a zero wastage system, people have put together a resilient system of agriculture also blending conviction and tenacity to fight back. 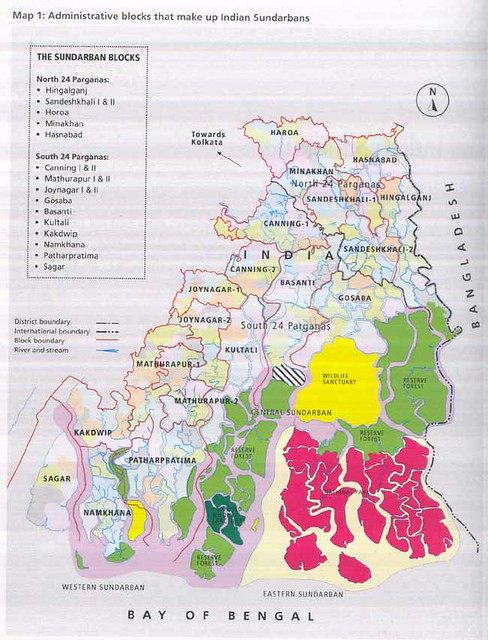 It’s been seven years since the deadly tidal waves rushed in; the land is still saline and opportunities for survival, evasive. People here are quietly rebuilding their lives by working in tune with nature’s force, and not against it. Bringing the saline soil closer to its natural state has far reaching impacts both on the lives and livelihoods of the people. Firstly, it gives you your bread, and some butter if there is a surplus. Plus, if farming becomes subsistent for the family, the men are less likely to move away from home for work.

In Nebukhali village, a large number of men have migrated in search of income opportunities. “This time he came after 2 years. Earlier too, our husbands would go for some part for the year. After Aila, nothing grows properly, there is no work and so they remain away for years together in factories, construction sites or do petty jobs in cities like Kolkata or Chennai”, remarks Kalyani Barkandaj.

Soon after Aila, Development Research Communication and Services Center (DRCSC) had started working with about 46 villages in the North and South 24 Parganas districts in the Sunderbans delta to bring farming back in the area--the kind that is not just organic but integrated. This kind of farming integrates the natural behaviour of local animals and insects to grow diverse local plants making the best use of the available space and terrain. The result is food security for the family for most of the year, and some surplus with additional processing. For an area that has lost much of its fertility--and people all hope--the success of integrated farming showing up on the faces of these women is inspiring, to say the least.

Binota is a member of Preetilata Mahila Samiti Self Help Group and has a nutritional garden for her family that she has watered with her earnest labour and patience. “Before Aila, even though the land had no salinity, we just had one crop-paddy plus some vegetables here and there, but I now have so many types of vegetables, a fish pond with an overlooking chicken house and a biogas plant”, she adds confidently. The group also has a grain-bank built with support from DRCSC’s Area Resource Training Centre (ARTC) through a loan. The grain-bank means security on a rainy day and relief from running into debts or paying huge interests. “This is easy, we take grains from the bank whenever there is a scarcity and return an additional 5 kg. No interest, but the bank never runs out”, she adds. 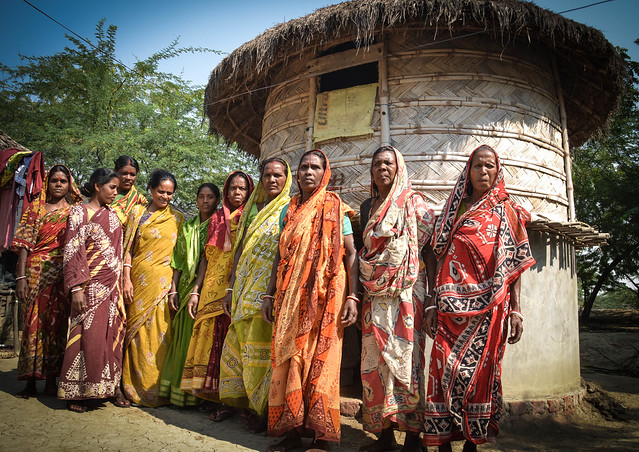 Working together as a group has great benefits. Not only is there less risk in carrying out new tasks but also tremendous amount of support these women get from each other. One such example is Maa Sharada Krishani Dal in Bakra village of Hingalganj where 16 women came forward to rear fish in an area that was devastated by Aila. “We decided to do fish rearing because it is more profitable than farming. It is difficult to cultivate anything here, the soil is very saline”, says Manju Rai. In their first year, they released about 30 kgs of fishlings in a pond with a loan from ARTC. 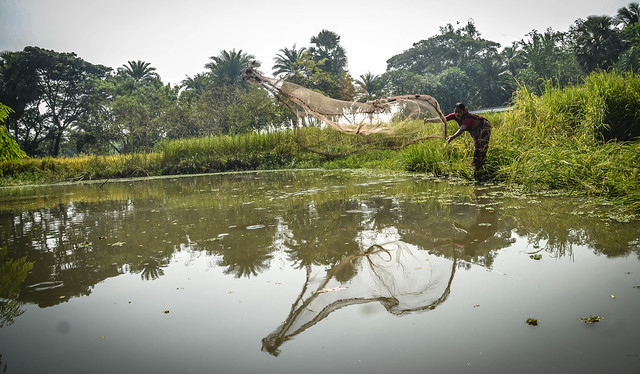 The fish hatchery was at a nearby polymer pond (a small dugout with a polymer sheet at the bottom preventing seepage) owned by Karuna Rai, also a member of the group. She recalls that the floodwaters during Aila stayed in for 17-18 days as her plot was low lying. That water seeped into the ground and therefore the soil became saline. “My crops were a constant failure after the floods. With this polymer pond, we save some money from irrigation, get potatoes and a few other other vegetables, fish and feed for fish”, she says.

For many other water-logged areas, landshaping has come to the rescue. Landshaping entails changing the shape of the land; so a pond is excavated in one portion, and the excavated soil used to raise nearby portions to grow vegetables throughout the year. Pradeep Maiti of Mamudpur village has seen a turn of fortune with landshaping in his field. “It was a low-lying plot, I cultivated only paddy and just one time in a year”, Pradeep remarks. After attending a few of DRCSC’s trainings, he excavated a pond on one side of the land and raised his paddy field by 4 feet with the excavated soil. On the other raised side, he is able to cultivate 4-5 times in a year, and about 13-14 varieties of vegetables along with rice and fish. “I was very poor and to have two square meals a day was a struggle. Earlier, the output was 16 bags of rice that meant about Rs. 10000 in a year. Now, we have fish to eat plus 1 kg of fish sells everyday for Rs. 100. My family need not buy vegetables, rice, fish, turmeric and oil. One hectare yields about Rs. 15000-20000 in a year,” he recounts with a blush. 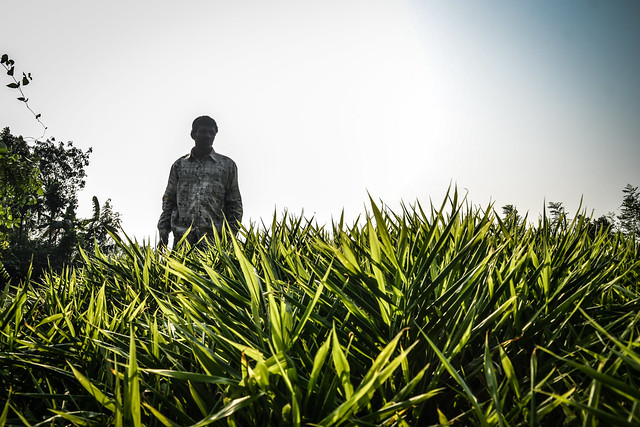 It is through regular adding of organic manure like cow-dung, compost and vermi compost that the saline soil has become fertile. This sentiment steers clear in many at Kanaknagar village. Abhijeet Mandal, a role model for many because he has a lush nutritional garden swears by organic farming. He is part of Naba Krishi Chetana, one of the two groups in the village working on integrated farming and who also maintain the seed bank. The other, Naba Sobuj Chetana also has 15 members. Why does one need a seed bank if it is easily available in the market?  “We keep seeds because we don’t do chemical farming. It’s all organic. Crops raised with chemicals do not grow if you do not add chemicals. Organic grows on its own. When you buy seeds from the market, those are prepared in chemical conditions and therefore need more chemicals to grow, otherwise they fail. Our seeds, manure, farming--everything is organic so the plants/crops live for longer periods”, says Abhijeet. With the help of this seed bank, local plants are preserved, encouraging more people to join in.

Ramesh Mistry of Kanaknagar has it all--an integrated farm that many would envy, a paddy field, a raised section of land for growing vegetables, a pond with a duck house over it (the duck excreta becomes feed for the fish) as well as a biogas plant using cow dung from his 4 cows. He gets cooking gas and uses the slurry as manure in his field and garden, in pond for feed, and sells those as cakes for fuel.

For someone who would struggle with one crop in a water-logged area, this way of farming has sown new seeds of faith. “The soil was impossible. Now the diversity has increased to some extent but what has changed the most is the quality of the soil. It is soft and moist now and the output is much more. He ponders with sheen in his eyes, “In between monsoons and winter, there is a time when people have to buy vegetables, but for those in our group, we have enough for their needs. We grow something or the other for our family all through the year and sell if there is a surplus.” This is the real change. Now he doesn’t buy, but instead sells. 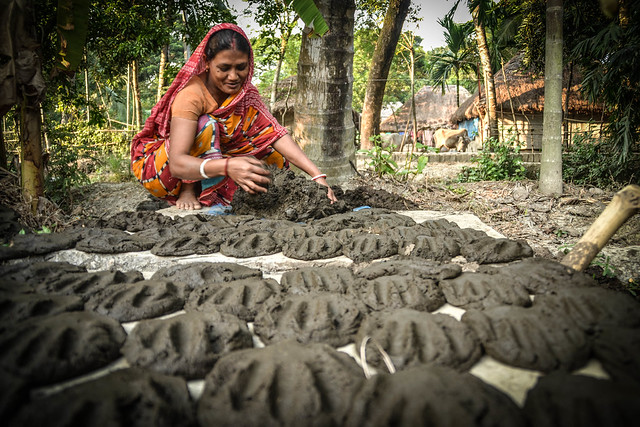 The Sunderbans area is vulnerable to extreme events like Aila. No one knows what the changing climate may bring in its wake, but the knowledge people here have gained may be able to sail them through safely.

View more photos of the Sunderbans.