Shimla school goes from students bathing every other day to swimming daily!

Four storage tanks are linked to 1350 sqm of rooftop area at Bishop Cotton School in Shimla.

Mathew Jacob, estate supervisor at Bishop Cotton School (BCS) in Shimla, remembers when he took his students walking in single file to the nearby stream to wash and bathe every other day in the summers. Today, the present lot of students take laps in the swimming pool even in the driest of months! Shimla is a city blessed with very high precipitation but a poor distribution network which results in water scarcity in the summers. Established in Shimla 1859, the famous boys’ residential school with illustrious alumni including author Ruskin Bond, industrialist Ratan Tata and golfer Jeev Milkha Singh to name a few, was also victim to this crisis.

Rising strength of the students and staff continued to burden the already stressed supply but the school managed by hiring water tankers and providing only short supplies to residents. For Jacob, it was a situation that could be easily handled. “I belong to Kerala where we have traditionally been harvesting rainwater in wells and ponds. At a household level, we hang a muslin cloth over four sticks and the rainwater passing through the cloth is collected in a pot to be used for drinking and cooking,” he says. 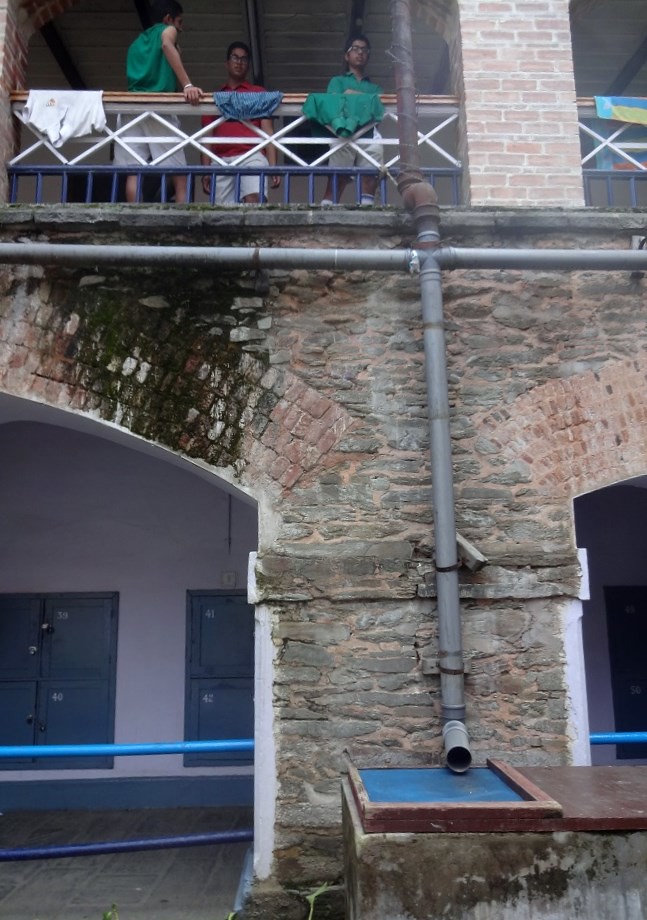 The concept of rainwater harvesting is simple but to implement this at an institutional level, technical know-how especially about filtration and plumbing systems was required. Help came in 1992 from the Council for Advancement of People’s Action and Rural Technology (CAPART), which was running a programme on rainwater harvesting for institutes. Two storage tanks were dug and lined with polythene to collect rainwater from rooftops.

Though the programme ran only for two years, it introduced the school management to the basics of the required set up. The storage tanks were fortified with cement and new structures were built with links to the rooftops. Already slanting roofs of the buildings in the hills easily fit into the scheme of things. By the year 2000, rainwater was also being used for flushing in the washrooms and bathing. The school also got four borewells of which two are still functional. The water falling on around 1350 square metre of rooftops is collected at different locations.

The rainwater is led through a mesh which stops pollen, pine needles and monkey droppings from going into the filtration chambers, which are mainly lined with pebbles, coarse sand and charcoal. The filtered water is then sent to the storage tanks from where it is either pumped to the overhead tanks for use in the toilets and kitchen or for gardening. The water from the storage tanks is also sent to the central filtration plant before its use for drinking and cooking.

“When I joined here 22 years ago, we had a storage capacity of just 14,000 litres. Today, there are four storage tanks with a capacity of around 7 lakh litres. Of this, rainwater makes up around 3 lakh litres,” Jacob says. The daily water demand of the school is around 1 lakh litres of which 60 percent is met by the Municipal Corporation. “During lean months, this supply further reduces but we have enough water for the residents, and water tankers are not required,” says Rabinder Kaul, former incharge of the school’s Nature Club.

The experience also inspired the school to look for natural solutions to a challenging situation. In April 2006, the swimming pool had no water due to a supply problem from the Municipal Corporation. The management decided to hire 24 water tankers at cost of Rs 60,000 to fill the pool as swimming classes were getting delayed but before that could happen, clouds gathered and the management changed its mind. “Rainwater flowing out through the open drains was diverted towards the pool downhill. It was made to pass through a steel tank lined with filter media. By next morning, the pool was filled to its maximum capacity of around 2 lakh litres without any expense,” Jacob explains.

The school spent around Rs 45 lakh on its water set up which includes the centralised water filtration plant costing Rs 35 lakh. “Though rainwater is usually clean, we were not sure about the supply from the Municipal Corporation. Besides, we also use groundwater through borewells which requires filtration,” Jacob says. BCS has emerged as an example worth emulating especially for residential schools in the hills which are bound to have high water demand but low supply.