A report of the flashfloods in Uttarakhand in August 2012

Horrifying images like the one below, where a two-storey house topples like a child's toy, are commonplace in the Garhwal region of Uttarakhand. This year, the mayhem due to a cloudburst claimed 31 lives and disrupted hundreds more. This article examines the phenomenon of frequent monsoonal damage in this mountain state, probable reasons, and suggests possible mitigation measures.The story in 2012
A cloudburst on August 3 triggered landslides and flash floods that left 31 persons dead. Occuring during the Char DhamYatra season, this event left several hundred pilgrims stranded and further increased stress on available resources in the area. In addition to destroying several homes, the floods also washed away part of the Gangotri National highway, and the Gangotri bridge leaving parts of the district inaccessible.

The causes
The Himalayas are young mountains, formed -as is well known- by the pushing of the Indian sub-continent against the Asian landmass. It tends to be forgotten, however, that this process is still going on. This accumulation of seismic pressure makes the region an earthquake-prone zone.
Built of the floor of the Tethys Sea, the Himalayas are composed of sedimentary rocks, mainly phyllites. These loose rocks are fragile and vulnerable when saturated with water. However, it is arguable that human activities have intensified the damage caused by these landslides.
As Dr.Shekhar Pathak explains,'Natural calamities are as old as the Himalaya is. The human factor may have become more dominant in recent centuries and accelerated in last decades. Apart from the geo-tectonics of the Himalaya the road construction, dynamiting, tunneling, dam making, mining, urbanisation, population growth and growth in tourism have contributed in natural calamities.'

Compensation: Every disaster brings a spurt of relief measures, and this is no different. The Uttarakhand government had sanctioned Rs three crore for providing relief to the victims of cloudburst and floods in Uttarkashi district. This includes a certain assured sum to houses that were either totally or partially damaged, as well as a maintenance amount for the following six months. 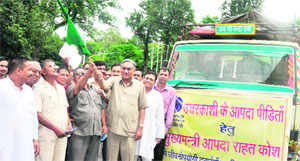 However, the region needs aid beyond post-event compensation. With such monsoon-related calamities becoming a regular event in the region, an examination of the intensifying factors is required.

Search-and-rescue training: In order to minimize loss of life during the crucial hours immediately following a disaster, the government has  initiated search-and-rescue trainings among community and government workers. ASHA workers, ANMs, and youth are trained in the basics of this  important skill and provided with the necessary equipment. So far, 4223 members of the community have been trained.

Construction guidelines: The issue of relocation brings up the more pertinent  (and more difficult to implement)  issue of proper location in the first place. As a very simple instance, the video at the beginning of this  post is certainly tragic- but is this unexpected? Building a two-storey concrete structure at the very edge of a fragile and shifting slope has predictable consequences.

This is a fact known to every child that has ever built a sand-castle, why is it  so difficult for the state and its  residents to recognize this fact? Increasing urbanization, a paucity of land, aspirational building, and the perversity of human nature which leads us all to believe that disasters happen to other people all contribute to precariously perched houses and shops.

Multi-storey buildings on the banks of a river are vulnerable to collapse in the Himalayas (Photo courtesy: Amar Ujala)

However, this is less excusable when it comes to the construction of infrastructure. Most landslides occur along roads, where the already weak rock layers are weakened and exposed by cutting. In 2000, the Indian Space Research Organisation along with various other institutions like the Wadia Institute of Himalayan Geology, Central Building Research Institute, Indian Institute of Technology and USAC among others have prepared a map which showed the risk areas in the State. This map is unfortunately not being consulted at the time of  road construction, resulting in repeated damage to infrastructure and resultant loss of  life and property.

Post By: chicu
Topic
Climate and WeatherRainfall and other forms of PrecipitationDroughts and FloodsNatural Disasters
Sub Categories
News and Articles
Video, Audio and other Multimedia
Regions
Political
Uttarakhand